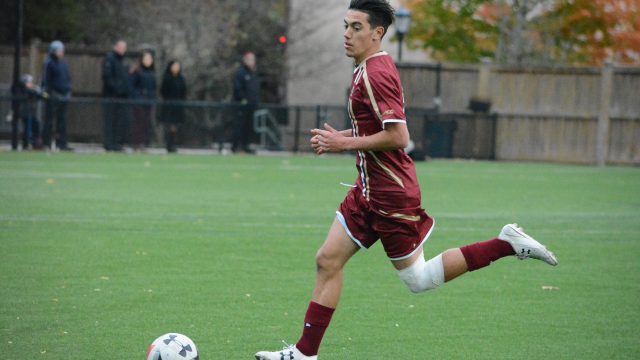 When Boston College men’s soccer arrived at the field for its Tuesday night contest with the University of Massachusetts Lowell, the Eagles had not scored or won in four games. At least they broke one of these streaks.

The Eagles dropped what looked like a sure victory in overtime to the visiting River Hawks. After leading 2-0 until the 73rd minute, the Eagles surrendered two goals in regulation and the golden goal in overtime to lose their fourth game out of their last five, 3-2.

BC (6-7-2, 2-3-2 Atlantic Coast) had played exactly 406 minutes of soccer before it could finally find the back of the net for the first time since its matchup against Pitt on Oct. 7. To put that in perspective, you could watch the entirety of the Star Wars original trilogy, with 30 minutes built in for bathroom breaks, in the amount of game time it took for the Eagles to score. But in the 15th minute, midfielder Mohammed Moro swung a beautifully bent cross into the box from 40 yards out directly to the head of 6-foot-2 German forward Maximilian Schulze-Geisthovel. With a masterful flick, Schulze-Geisthovel directed the ball into the top-left corner of the goal, and BC finally got the scoring monkey off of its back.

Action resided almost entirely in the Lowell (11-1-2, 3-1-1 America East) offensive end for the first half of the game as BC kept the pressure up. The Eagles’ efforts paid off in the 38th minute, giving them their first multi-goal game since Sept. 20. Freshman Callum Johnson notched his second goal of the season as a low, hard shot just inside the 18-yard box deflected off of  the leg of a Lowell defender. Zach Rowell, the River Hawks’ goaltender, had already committed to his right, and could do nothing but raise his arms in disgust as the ball slowly bounced by him to the left.

In response to the deficit, Lowell inserted its leading goal scorer Wuilito Fernandes, and its leading point scorer Ivan Abramovic to start the second half. Up 2-0, however, the Eagles appeared to be in control of the match. With a seemingly secure lead, the Eagles played more conservatively, content to park the bus and remain strong at the back rather than risking attack.

For the first 25 minutes, the strategy seemed to be working fine, as Lowell had trouble putting shots on goal. As the half went on, Lowell seemed to be getting closer and closer to putting itself on the board. In the 68th minute, Fernandes handled a long pass and flicked a chip up over the head of Saladin. But before the ball could reach the net, BC freshman defender Fintan Devlin came to the rescue to clear the ball out of bounds and keep the margin at two.

The first breakthrough for the River Hawks came in the 73rd minute when Dario Jovanovski led Fernandes with a precise ball into the box. Fernandes punished the net with a screaming finish to give his team its first goal and a renewed sense of hope. The reaction from the bench was startling as it erupted in cheer, while the BC bench looked on with a sense of discomfort.

The Eagles became more aggressive, trying to take the fight back to Lowell’s side of the field. While possession became more balanced, the River Hawks only needed nine more minutes to find the equalizer in the 82nd minute. It occurred when a long ball from outside the box found its way to the front of the net, where it bounced dangerously in a huddle of players from both teams. The chaos persisted for only a second or two before Fernandes freed the ball from the pack and directed it right to the feet of Abramovic. Standing in front of a wide-open net at point-blank range, Abramovic could relish the moment as he tapped the ball into the net and elicited a roar from the now fully-resurrected Lowell bench.

From that moment on, the desperation from both sides was plainly evident. The play was reckless and aggressive as both sides searched frantically for the goal that would send them home the victors.

BC earned a foul at the top of the box in the 87th minute when senior Zeiko Lewis nicked the ball swiftly from the defense and was fouled just before he could storm the box. Heated jawing ensued, which only added to the drama of the late free kick that might have saved the Eagles from a loss. Lewis scalded the ball with tight horizontal spin, but the surely aching defensive wall prematurely cut it down before it could do any damage.

With under a minute remaining BC made one last spirited break for goal. With three attackers bearing down on goal it appeared to the small crowd on hand that the Eagles might escape their similarly avian foe. However, with a man open in the box, senior Isaac Normesinu chose instead to take a shot on goal that went well wide of its mark and doomed the teams to overtime.

Overtime was furious in pace and contact, as the phrase “battling it out” became more and more appropriate. The referees allowed play to continue through hard contact as the teams swung to the sides of the field with fervor. The rough play led to one last chance for BC as it was rewarded yet another free kick just outside the box. Normesinu took the free kick with visions of redemption. While he got the shot on target, he couldn’t best Rowell, who dove quickly to his right to make a game saving stop.

With time winding down in the first overtime period, Fernandes brought the ball to the goal line just outside the 18-yard box. He sent a bouncing cross through the heart of the BC defense to his partner in crime Abramovic. In a nifty maneuver, Abramovic beat Saladin with his back to goal, expertly flicking the ball by the unsuspecting keeper, cementing the comeback win.

Frustration covered the face of BC players. Some dropped to the ground in anguish as Lowell celebrated on its home field. Muffled grunts squeaked through pursed lips, as BC was forced to deal with its second overtime loss in a week.

With two players out on card accumulation, in addition to injuries that have removed key pieces from a team that was once ranked, a lack of starting personnel certainly didn’t help the Eagle cause. When asked what the team would focus on as it prepares to take on conference opponent North Carolina State in the regular-season finale, head coach Ed Kelly stressed needing to get back to full strength.

“We just have a lot of guys out,” Kelly said. “We’ve got to get these guys back.”

While circumstances have not been fortunate by any standards, BC has failed to take advantage of opportunities for wins on many occasions in the past month. It is not unreasonable to imagine that a number of recent outcomes could be reversed if the Eagles could simply make one or two more plays.

Kelly wasn’t looking to make excuses, however. He lamented the missed opportunities, terrible fouls, and lack of composure that allowed Lowell a way back into the game. And with one game left before the ACC playoffs, Kelly believes his team will need to shake its recent plagues and recollect itself in a hurry.

“When the going got tough, we didn’t have the leadership,” Kelly said. “We did not play well… it was a bad day for the good guys.”

men's soccer ed kelly zeiko lewis umass lowell callum johnson maximillian schulze-geisthovel
Halloween Unleases ‘Madea,’ Juice, and ‘Inferno’ This Weekend in Arts
What Would You Do If You Saw A Clown On Campus?