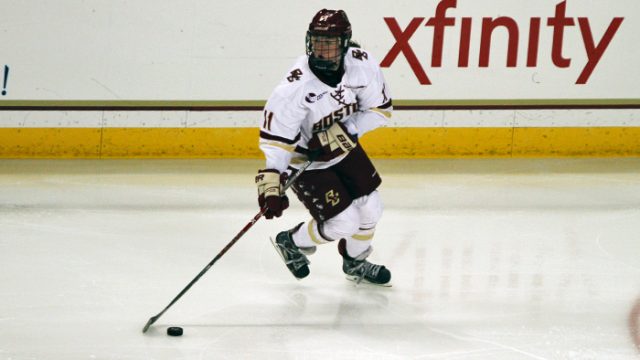 When Boston College women’s hockey boarded the bus for its home-and-home series against the University of Connecticut on Friday, it was one teammate short. Rather than hanging around Storrs, Conn., for the evening, Megan Keller was about three hours south in East Meadow, N.Y., training for the Four Nations Cup, which will take place in Finland later this week. To leave without arguably the best defenseman in the nation spells trouble for any team. But the Eagles had a few tricks up their sleeves—namely the triumphant return of Andie Anastos and the contributions of younger players—to sweep the Huskies in the series.

Gearing up for the second game of the series, the Eagles (6-2-2, 5-1-0 Hockey East) put the Huskies (4-4-1, 0-2-0) through the paces in the first period. With just a minute of play under its belt, BC earned the lead from an outstanding play by Caitrin Lonergan. After streaking up the ice, the freshman was one-on-one with goalie Annie Belanger. While redirecting the puck past the goalie’s left side, she tripped on Belanger’s skate, sending her careening into the boards—but not until after the puck was already in the net.

After a lull, BC struck again, this time from Ryan Little. In the middle of the faceoff circle, Little took a well-placed shot in between the right post and Belanger’s right arm. The puck hit the back pipe and swirled around the edge of the goal, putting the Eagles up 2-0. Just as the clock was running out, Little notched another one, the third goal of her career. After Grace Bizal launched a hard-hit shot into traffic, Little was in the right place at the right time to tip it in.

The Huskies neutralized the Eagles for the second period, staving off any goals and holding themselves to only one penalty, which they killed with ease. Though BC showed tremendous talent from its younger players, it also showed that the team has not managed to perfect its power play. With five opportunities, including a 5-on-3, the Eagles didn’t come out as strong offensively as they have in seasons past.

The third period began with the same humdrum tone of the second, but Serena Sommerfield broke it up after earning her first career goal. Though she can play both offense and defense, Sommerfield has dressed in her last few games as a defenseman. But for Sommerfield, much like Keller, it doesn’t matter if she is a defenseman—she can score goals, too. She took her shot from behind the faceoff circle, and it was powerful enough that it trickled in past the right post. Kenzie Kent stood in the crease just in case, but only had to watch the puck go in.

“As soon I made eye contact with Haley McLean, I knew she was going to pass it,” Sommerfield said. “I thought, ‘As long as I get it low and down deep, I’m in good shape,’ and it just hit a skate and trickled in, so lucky me.”

The Huskies took advantage of an opportunity to retaliate just a couple minutes later. After Toni Ann Miano was sent to the penalty box for elbowing, UConn’s Theresa Knutson took a shot on Gabri Switaj from the faceoff circle and sent the puck around the inner post. It was an unlucky break for Switaj, who blocked 17 shots in her second appearance of the season.

In true BC fashion, the Eagles scored their final goal while on the penalty kill and facing an extra skater. With the empty net, Anastos evaded the Huskies and took her shot at the left faceoff circle, sending the puck to the top right corner of the twine. Caught up in the play, a UConn player took her down, sending Anastos slamming her head into the boards, but the Eagles had clinched it.

It was a relaxed game for Anastos compared to the first of the series, in which she carried the offensive play with a hat trick for a 3-0 win. In this match, the Eagles fared much better when on the power play, with all of the goals coming on the man advantage. In the same vein, BC held itself to only one penalty in the game, which came late enough in the third period that it caused no impact.

After a penalty on Rebecca Lindblad drew no offensive game for the Eagles, BC capitalized on a slashing penalty on Catherine Crawley four minutes later. Time was winding down quickly for the Eagles, but Anastos had young stars Makenna Newkirk and Lonergan to help her out. With a pass from Lonergan, Anastos launched a high shot that clanged in for her first goal of the night.

The next power-play opportunity came five minutes into the second period, when Tristyn Svetek was called for tripping. Again cutting it close to the end of the power play with just 24 seconds left, Newkirk took her own shot into a crowded UConn defensive zone. Fortunately, Anastos was there to bury it into the net. Her last goal took only seconds into the power play to happen. She won the faceoff and passed the puck off to Newkirk, the standard fourth forward when the Eagles have the man advantage. The two collaborated on a play to take it down to the goal, and Anastos finished it off. Anastos’ hat trick came fairly recently after her last, which took place in Feb. 2016 against Providence.

While Keller was—and will be—sorely missed this week, the Eagles did well without her. Maybe there would have been a few more goals scored, but BC was comfortable enough in the series to take chances on less experienced players while giving the more seasoned players a break. Two painless conference wins will help set apart the Eagles as play gets harder—their crosstown opponent for next weekend, Boston University, has already faltered to 2-3-0 in Hockey East. The Eagles may not have Keller, but right now, they’re all smiles.

women's hockey andie anastos makenna newkirk gabri switaj caitrin lonergan ryan little serena sommerfield connecticut
What Is The Craziest Costume That You Have Seen?
The Man on the Train 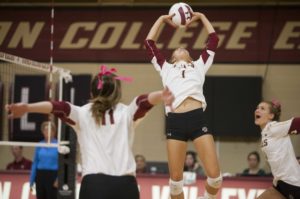