Home » Finding Validation in the Bathroom 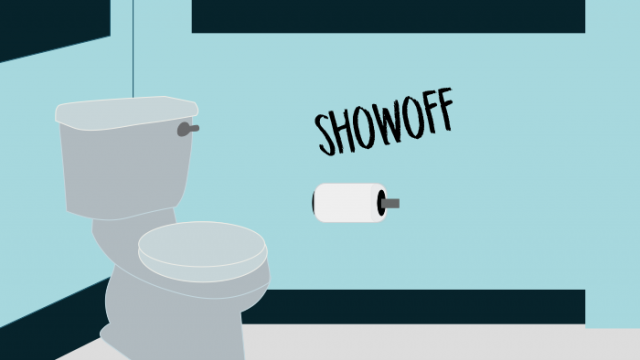 Finding Validation in the Bathroom

On the inside of a stall door in the pre-renovation girls’ bathroom on the second floor of Mac, the phrase “SHOWOFF!” used to confront unassuming tinklers with black-Sharpie ferocity. The juxtaposition of this phrase with its location has always intrigued me. The word “showoff” and the exaggerated exclamation that the author afforded to it suggest the presence of an audience within the stall, moreover that the bathroom-goer is being garishly impressive, enough to warrant an unasked-for response. But, the reality of the situation could not be more opposite. In their traditional use, bathroom stalls do not promote observable performance, much less impressive observable performance. With the exception of those located in middle schools and college bars, bathroom stalls do not harbor an audience, let alone a peanut gallery. Yet it is exactly this contradiction between the reality of the bathroom stall and the conventional implications of the word “showoff” that the graffiti in the old girls’ bathroom plays off of. The phrase “SHOWOFF!” is intentionally paradoxical, dramatically sarcastic, as if to say, “You are alone here. Of course you are alone.” It emphasizes the solitude of the domain.

The phrase must do this. It must make you unequivocally aware of your aloneness in order to make its point: “Yes, you are alone, but you alone—sitting here on this toilet, wiping your hiney, zippering your pants, and doing absolutely nothing noteworthy—you alone are impressive.” Is this not the poetic purpose of a bathroom stall? To validate our existence in its most organic form? To give us a self-satisfying purpose? To allow us to feel accomplished without another’s commentary creating that feeling for us?

I will be arguing yes to all of the above. In order to do so, I will have to momentarily fulfill a stereotype associated with my femininity when I ask: will you come to the bathroom with me?

Historically, graffiti is a form of expression that is considered deviant and unwanted. Often washed away or painted over once it is found, graffiti rarely finds itself in the right place at the right time. But what happens when it does? Graffiti that stays has the ability to entirely change a domain, to redefine a surface—dull to colorful, silent to speaking, dormant to alive. Bathroom graffiti is no different in this respect. It speaks on behalf of the rickety, dull-rust colored dividers that can’t. Let’s lend an ear.

In the handicapped stall of the girls’ bathroom on the second floor of O’Neill, various quotes create a halo around the toilet paper dispenser. Three stick out in particular. The first, written in blue ink: “you are enough,” followed by a heart. A penciled-in edit puts a carrot between the “are” and “enough” of the original line to add “so much more than,” all underlined. Altogether: “you are so much more than enough,” with a heart. The second, written in green ink: “Like wildflowers you must allow yourself to grow in all the ways people thought you never would.” And the third, in black marker: “I love you. – God.” These quotes express a poetic purpose. The first: a two-fold validation of one’s unaccompanied, unaffected existence; an insistence in the weight and the wonderfulness of you. The second: support and encouragement for the tinkler to move in the direction of her own dreams; to not only exist, but to flourish in her own right. And the third: even to the non-religious (like myself) this statement holds some weight—it suggests the existence of an unspoken, yet omnipresent appreciation of the you.

Together, these quotes serve as an advertisement for the self. Condensed onto a billboard, they would likely read: “Selfhood: Pass It On.” The bathroom stall’s ardent promotion of selfhood encourages an answer to the seemingly unanswerable question of our time: who are we when we’re alone?

For college students, this question is especially difficult to answer. We share classrooms, hallways, dining halls, rooms, and, yes, bathrooms. The frequency of our interactions with others causes us to live our lives as responses, rather than proclamations—our actions resonate as a projection of the world around us, rather than an externalization of our internal selves. Yet this truth does not remain within the bathroom stall. The base purpose of the bathroom stall is to externalize that which we hold inside. In a less crude, metaphorical sense, this can be seen as an externalization of the lone, unaffected self—the self that the world tries to have a say in and distort.

This is not to say that our affected selves are less than our authentic selves. Both are integral to our beings, yet they are seldom regarded with the same weight. In a society that thrives on its connectivity, we are led to believe that our connected selves are more impressive than our lone beings. We are afraid to be alone.

There is a beauty in being alone, and it takes the form of a tan-tiled, creepily overheated public bathroom. Where else in the world can you sit on your hiney, half-naked, staring at a wall, and feel like “you are so much more than enough?”

That’s right. I’ll see ya in the bathroom, showoff.