Strong Cast, Striking Visuals Will Not Save ‘Inferno’ from Critic Hell

Robert Langdon, world-renowned Harvard professor of religious iconography and symbology, has already found the Holy Grail and saved Vatican City from an antimatter bomb. Now it’s time to turn up the heat.

Inferno is the third movie in the Robert Langdon film series, after The Da Vinci Code and Angels & Demons. Each movie in the series is based on novels of the same name by Dan Brown. Ron Howard returns to direct what is hopefully the final installment of this film series. The movie opens with Bertrand Zobrist (Ben Foster), a billionaire geneticist in favor of drastic measures to reduce the human population, running from armed agents. When cornered at the top of a high tower, Zobrist jumps off, opting to end his life rather than be taken in by the authorities. In the next scene, Langdon (Tom Hanks) wakes up, dazed and confused, in a hospital bed. He has no memory of the past few days. He learns, from Sienna Brooks (Felicity Jones), that he is in Florence and that he has mild amnesia. He is also plagued by visions of Hell on Earth.

Out of nowhere, the two are shot at by the female assassin Vayentha (Ana Ularu) and they escape to Brooks’s apartment. They find a projection of Botticelli’s Map of Hell, an image based on Dante’s Inferno. The image contains letters and phrases that form an anagram to remind the audience that, in spite of all of this nonsense, yes, these characters are in a Dan Brown movie. They learn that Zobrist has created the “Inferno” virus, a pathogen capable of wiping out half of the world’s population. Now the movie can begin.

The characters follow a lead to a 500-year-old monument, only to realize at the last minute that Langdon forgot to take into account some detail he certainly should have noticed. He then walks up to a conveniently knowledgeable tour guide to ask a question about an inane detail. Without fail, the guide gives him the answer he needs. The last two movies used the same plot device.

There is one detail in particular that instantly and consistently pulls the viewer out of the movie. Langdon should know Italian. He is a religious iconographer. Much of Catholicism is centered in Italy, many primary sources that he studies would be written in Italian, and yet he consistently asks other people to translate some document for him. It is a small part of this movie, but with such repetition it quickly becomes frustrating.

Inferno tries to spring multiple twists on the audience. None of them land with the impact that the movie would like.

The actors all turn in a serviceable job. Christoph Bouchard (Omar Sy) is fine as a rogue World Health Organization agent. Elizabeth Sinskey (Sidse Babett Knudesen) does a decent job as Langdon’s love interest, even though that plotline feels forced. There is one character that does feel fresh. Harry Sims (Irrfan Khan), is the CEO of The Consortium, a private security firm. He only wants to be on the winning side of things and injects some refreshing humor into his scenes. But he cannot save this movie. Not even Hanks and multiple Shyamalan-esque twists can rescue it from mediocrity. In spite of these “twists,” the movie ends predictably and everything is tied up with a neat little bow.

If watching Hanks run around European monuments in a mediocre movie is the goal, then this movie is a must-see. But if watching a film that has good characters, dialogue, and story is what you have in mind, look elsewhere. 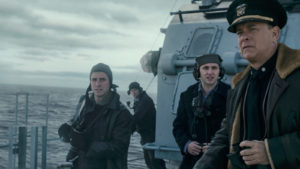