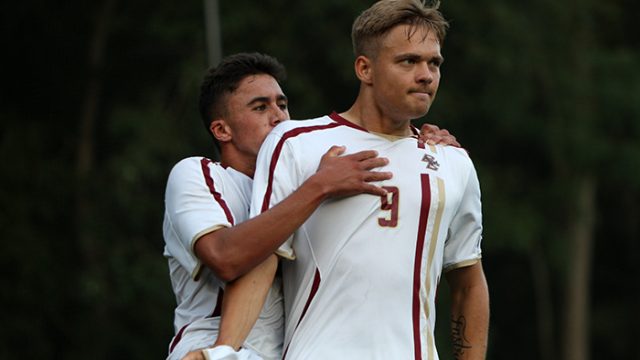 Clemson 56, Boston College 10. The last time the Eagles played the Tigers, it was a blowout. But that was the other kind of football. This time, BC was determined to turn the tide as it headed into the semifinals of the ACC tournament after an upset victory over No. 4 North Carolina last week. Clemson won a hard-fought battle against Syracuse in penalty kicks last week. The game promised to be a close one, and it was, but No. 25 (8-8-3) BC couldn’t quite get the W, falling 1-0 to the No. 3 Tigers (12-2-5) on a last-minute heartbreaker.

The Eagles started off shaky, tested on defense early in the game. The Tigers earned a free kick 11 minutes into the match from 22 yards out, but Aaron Jones’s shot was saved by sophomore Cedric Saladin. About 10 minutes later, Clemson had a good chance in the box but Abe Bibas emphatically slid to block the shot. The Tigers were knocking on Saladin’s door.

Clemson was awarded a penalty kick with 3:43 left in the first half when Thales Moreno was taken down on the left side of the box after a late tackle from freshman Younes Boudadi. Diego Campos took the shot, but Saladin, once again, made a monstrous diving save to keep the Eagles in the game.

“The penalty save is obviously huge for us by keeping us in the game.” Simon Enström told BCEagles.com. “Conceding a goal before halftime just could not happen for us.”

At halftime, Clemson had three shots on target to BC’s two.

Coming back from the break, the Eagles’ internationals were determined to turn the match around. The rest of the game was all maroon and gold. Eleven minutes into the second half, senior Zeiko Lewis created some space at the top of the box, moving to his left and firing a hard shot on goal, although it was saved by Clemson’s Ximo Miralles. A few minutes later, freshman Lasse Lehmann stole the ball in the defensive half, feeding a streaking Enström to his left. With a man on him, Enstrom fired, but the ball sailed wide of the target.

In the 81st minute, after a successful counter-attack, Maximilian Schulze-Geisthovel got a shot off but it was stopped by the Tigers’ solid defensive effort.

Against the course of the game, a foul call gave Clemson an unfortunate free kick from 30 yards out on the left side in the waning moments. Aaron Jones sent the ball into the middle of the box, where Frenchman Alex Happi, in mid-air, whipped a header into the back of the net for the Clemson win with 89 seconds left.

“I think we don’t deserve how we came out of the game but that is soccer, everything can happen,” Enström told BCEagles.com.

Although the ACC tournament is over for the Eagles, they await a bid for the NCAA Tournament on Monday. At No. 25, BC is likely to win a spot, even without a conference final appearance.

men's soccer clemson ACC tournament
After Trump Win, the Political is Personal
Seminoles Pose Yet Another Strong Challenge to BC