Home » After Trump Win, the Political is Personal 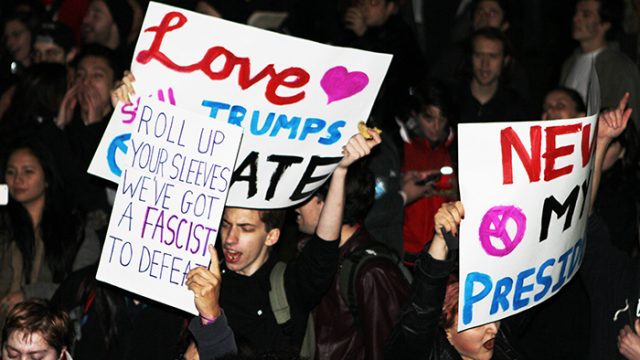 After Trump Win, the Political is Personal

On Wednesday night, I went downtown to the anti-Trump rally on Boston Common to report for The Heights. When I returned, I reflected on the backlash against the protesters and the emotion they displayed. Though I reported on the story as objectively as possible, I could not help but identify with the protesters.

Through the streets of Boston, members of the LGBTQ+ community, Black Lives Matter activists, Dakota Access Pipeline protesters, women, Fight for Fifteen activists, and immigrant and refugee activists alike linked arms and joined voices to chant “NOT MY PRESIDENT.” In an act of solidarity and a showcase of dissent, Bostonians, like those in many other cities across the nation, asked President-elect Trump, and the 47 percent of Americans who elected him, “Can you hear us? Do you understand?”

Many don’t—don’t want to hear us, and don’t understand. Many are fed up with the volume and frequency of protests and movements. I get it, we all wanted this election, and the division and conflict that it came with, to end with election night. I understand. I’m tired, too. But please hear us, and please try to understand.

The success of one movement does not necessitate ignoring another. Progress is not partisan.

My plea is hypocritical, I know. We are on the streets shouting and protesting about how the nation has turned its back on us, while for too long too many hard-working citizens had been neglected by Republican and Democratic elites alike. I understand the anti-establishment sentiment, and I understand why people voted for Trump after the rest of the nation’s leadership refused to acknowledge their needs. But the success of one movement does not necessitate ignoring another. Progress is not partisan.

We are on the streets of our cities, screaming into megaphones, because our message is one that must echo through cities. This is the man that will be representing this nation at the diplomatic table. He will have a direct hand in the process of steering our education system, our environment, our access to basic health care, and our foreign involvement. He is the most powerful player on a global stage. We march and chant because we do not agree with many policies that Trump has vowed to push. But deep down, what gets students, workers, elderly, and disabled citizens out on the streets, is how personal Trump has made this.

This is personal. As a woman, I am heartbroken that so many citizens were able to look past or accept how Trump has treated women. My body is mine; it is not up for grabs. Our president-elect has been groping, forcibly kissing, body shaming, and just plain objectifying women since he decided he has the power to. No one has that power. I am more than the length of my legs and the size of my waist. I am more than my appeal to men. Women who have come forward about assaults that Trump has perpetrated on their bodies have been shamed, ridiculed, and threatened. Trump has said that after the election, he will sue them. As a woman, as a survivor of sexual assaults, as a survivor who has been cornered into reporting, I am heartbroken. I know the courage and the fear and the shame and the hesitance that come with reporting to one stranger. These strong and beautiful women have stepped on the national stage with their experiences, trying to show their country who they have been rallying behind. And to be met with a pointed finger, a promise of a lawsuit, and the subsequent applause and cheering of other Americans? I am heartbroken.

This is the man that 47 percent of the nation that I live in has rallied behind. Whether or not they believe the comments that Trump has made regarding women, Trump supporters have shown me that they tolerate this blatant disrespect and degradation. For that, I feel abandoned by my nation, and for that, among other injustices, I ask that you respect and try to understand the emotion that citizens are demonstrating in their streets.

We are coping. We are scared for ourselves and our loved ones, and rightfully so. Violent and unacceptable hate crimes are already being perpetrated onto minority groups across the country in the name of “making America great again.”

We are not acting out—we are asking for your help and your understanding. In the future, the protests will dwindle as we find other avenues to incite change toward what our founding fathers built and fought for—”liberty and justice for all.” Please hear this, and please understand this.

I am not hopping on a bandwagon of protesters. I have homework to do, a social life to revive, and a job market to compete in, too. I don’t need to be out on the streets of Boston casting my voice into echoing unison with thousands of others. But I choose to, and thousands of others choose to, because, America, everything feels backwards. Everything feels backwards because 47 percent of our country chose to turn their backs on respecting us. Since kindergarten, my day started with the Pledge of Allegiance—“one Nation under God, indivisible, with liberty and justice for all.” Our nation is divided. We have half a nation screaming for the other’s attention. Please, I ask you to open your ears, open your hearts, and open your minds to what we are saying. I have done and will do the same for you.

Can you hear me? Do you understand? Trump is not my president. But I need him to become it.

3 COMMENTS ON THIS POST To “After Trump Win, the Political is Personal”