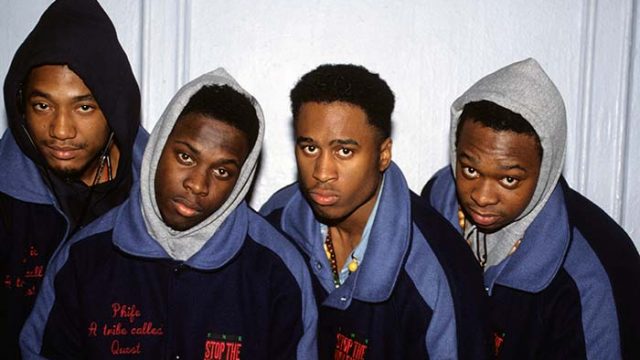 The phrase “Blast from the past” may not be the most academic way to describe We Got It From Here… Thank You 4 Your Service, but it certainly is an accurate one. For those who don’t know, A Tribe Called Quest, formed in 1985, has not released a new album in 18 years. We Got It From Here sounds like a collaboration straight out of the early ’90s hip-hop scene, but this is more a good thing than a bad thing—nostalgia, more than anything else, is the main idea at play here. A Tribe Called Quest’s newest foray into the industry is by no means flawless, but it rides the coattails of rap from 20 years ago, and somehow, it works meaningfully.

Before a We Got It From Here listen-through, be prepared for what is about to happen. The album does not slow down at any point—it is a verbal accosting. From the get-go, A Tribe Called Quest’s style of songwriting and performance is a double-edged sword. We Got It From Here… Thank You 4 Your Service is aggressive, fiery, and moves at a breakneck pace. In this sense, the album is true to its message—it is clear that the trio’s chief desire is to make its music, regardless of its reception. On only one or two occasions does We Got It From Here take pause for a slow(ish) song. Much as this enthuses listeners and hardcore fans, it does make We Got It From Here progressively more and more difficult to listen to. At certain points, the work is even entrancingly impassioned, lulling listeners into a near-hypnotic state of attention. The fire of We Got It From Here melts together song and song. It’s a strange feeling.

And, with that being said, some of these songs stand out far more than others. We Got It From Here… Thank You 4 Your Service opens with “The Space Program,” making use of light background beats and pure vocal mastery. Intermittently mixed into the work are eerie laugh tracks and excerpts from Willy Wonka & the Chocolate Factory (1971). This move certainly gains points in the originality category, and it works surprisingly well leading into “We The People….”

The second song of We Got It From Here is a glaring attack on racism in modern society. “We The People….” serves as a parodic insight into the mind of those attempting to marginalize minority groups, an alarmingly relevant topic in 2016’s America. The verse of the song makes the attack clear: “All you Black folks, you must go / All you Mexicans, you must go / And all you poor folks, you must go / Muslims and gays, boy, we hate your ways / So all you bad folks, you must go.” A Tribe Called Quest makes its voice heard very, very clearly, and the message is a solid one—the people who marginalize groups weaker than themselves are the evil ones, not the marginalized.

The real beauty of We Got It From Here is just how much the album relies on repetition to get this message across. Lyrics and sounds are played over and over and over, seemingly to drill this one central message into the skulls of those who will listen. In no way does A Tribe Called Quest fear its controversial statements. The best song from the album, “Melatonin,” links mental illness and drug abuse with racism and gang violence. “Dis Generation” is a sharply-worded criticism of older generations in America. Nothing is off limits in We Got It From Here… Thank You 4 Your Service, and this is incredibly refreshing.

It would seem as though A Tribe Called Quest has returned with a bang. Q-Tip, Ali Shaheed Muhammad, and Jarobi White sound as strong as ever. Their lyricism continues to be unrivaled. We Got It From Here may sound like an album ripped from the ’90s, but there is no doubt that it is a work for a new iteration of hip-hop. Not everything is perfect—some songs are not as polished, and the album can be a beating to listen to from beginning to end—but We Got It From Here… Thank You 4 Your Service is still one of the best things to arise from the rap industry in the last five years. Fingers crossed that A Tribe Called Quest does not end its triumphant return here—if it presses forward, the best is (hopefully) yet to come.

a tribe called quest we got it from here... thank you 4 your service
John Legend’s ‘Love Me Now’ Upholds Passion In Spite of Tragedy
‘The Misanthrope’ Plays With Gender Parity in Fiery Performance