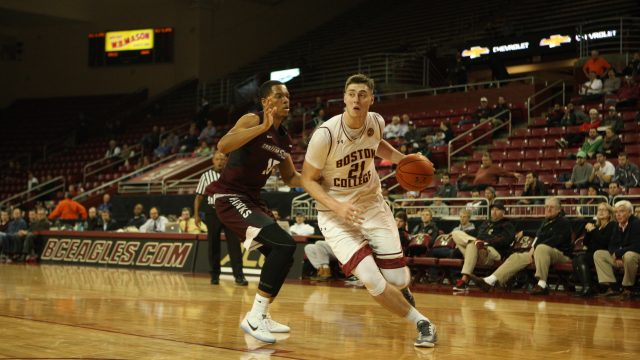 Turnovers and Fouls Plague Eagles in Brooklyn vs. Kansas State

BROOKLYN — Midway through the second half, Connar Tava dribbled just outside the 3-point line, shielding the ball with his back to the coaches’ sideline. As Jim Christian and his assistants yelped in dismay, Kansas State’s Xavier Sneed slipped along the blind side of an unwitting Tava. Sneed poked the ball free with ease, sending Tava stumbling to the floor. A barely concealed rage covered the graduate transfer’s face as Sneed finished the play with an emphatic dunk on the other end of the floor.

For Boston College, the emotions were all too familiar on a disappointing night in Brooklyn. Burdened by a staggering 21 turnovers, the Eagles fell to Kansas State, 72-54, on Friday night in their first game of the Barclays Center Classic, as the Wildcats raced out to their best start since 2013.

The Eagles (3-2) struggled to establish any offensive rhythm throughout the game, plagued by an inability to go more than a few possessions without surrendering the ball. Turnovers on the first five possessions following the first media timeout, including three by Ty Graves, set a sloppy and dispiriting tone for the evening.

“I just thought we were very weak with the ball,” head coach Jim Christian bluntly said after the game. “They had 13 steals, which is a ridiculous number and a lot of them were just taking the ball right off guys.”

Ky Bowman led the Eagles with 13 points, while Sneed led the Wildcats (5-0) with 16, as the freshman forward provided a boost of energy and athleticism off of the bench.

The game got off to a very slow and disjointed start, with Kansas State holding a narrow 9-7 lead 10 minutes into the first half. The teams combined to make just six of their 25 shots during this stretch. At least part of the slog can be attributed to both teams trying to play through a limited center in the post. BC frequently looked to put the ball in the hands of Mo Jeffers—who finished with just three points and seven rebounds—and the Wildcats featured D.J. Johnson—who picked up multiple fouls simply trying to post up.

Unlike Jeffers, Johnson asserted himself on the other end of the court—he finished with four blocks in 19 minutes, and he challenged guards at the rim by walling off the paint. Entering the game, Kansas State ranked fifth in the country in 2-point field goal percentage allowed, in large part due to the intimidating work of the senior big man.

In addition, Bruce Weber’s Kansas State team spent these close opening minutes establishing a work ethic that far surpassed that of the Eagles. The Wildcats disrupted the Eagles’ offense from the tip, denying the most basic post entries with fervor. In particular, they made it incredibly difficult for BC to execute the dribble handoffs that it likes to use to get Jerome Robinson, Bowman, and Graves the ball in pick-and-roll situations.

“Impose your will, keep coming at them and knock them out,” Weber says he told his team before the game.

As it turns out, the Wildcats’ head man has properly incentivized his team to give its all on the court. Sophomore point guard Kamau Stokes mentioned after the game that Weber uses a “Play Hard Chart.” With this, Weber tallies the hustle plays that you won’t see emphasized in the box score: deflections, box outs, blocks, and steals.

No one is better at topping that list than Stokes himself. He finished the first half with three steals, and had eight points, six assists, and four steals total, coupled with just one turnover.

Following the first 10 minutes, Kansas State began to pull away, with its superior effort and execution paying dividends. The Wildcats took a 31-22 lead into the locker room at the half, behind eight points from sophomore guard Barry Brown and despite missing all 10 of their 3-point attempts. BC, meanwhile, ended the half with more turnovers (14) and fouls committed (12) than made baskets (seven).

The second half didn’t go much better for Christian’s crew. Five minutes into the final stanza, the Eagles closed to within five points at 36-31 on a nifty scoop layup by Graves and a deft putback from Tava—a bucket that gave the Western Michigan transfer 1,000 career points. But the Wildcats 3-point shooting began to revert back to the mean—Weber’s team hit seven of its 13 3-point attempts in the second half. BC would never get closer than a nine-point deficit for the remainder of the game.

The Eagles did have one more spurt about 10 minutes into the half. Down 52-35, they trimmed the lead to 54-44 with seven minutes to go, with Tava scoring five points and delivering a gorgeous bounce pass to Johncarlos Reyes for a dunk after spinning baseline off of the right block. But the Wildcats tightened their defense and went on a 7-0 run over the next three minutes to effectively ice it.

Fielding a question after the game about Reyes’ stint, Christian lit into his team.

“I’m not sure if anybody gave us great minutes tonight. ” he said. “They were beating us to every loose ball and they were just more aggressive than we were.”

Clearly irked by the lack of effort, Christian took his critique one step further.

“We have some guys on our team that, in my opinion, need to play harder,” he said.

In that respect, the Eagles’ head coach wasn’t exactly off base. And certainly, even for those who played with maximum effort, like Bowman, smarter play will be required. The freshman point guard often played too fast, barreling into a crowd in the paint or throwing up a wild floater, a big reason why he shot just 4-for-13 from the field.

Robinson, the ACC’s second leading scorer heading into Friday’s game, shot just 3-for-12, met at every turn by traps and a wall of bodies in the paint. While he is the team’s best shot creator and will need to force some shots in every game, he may have been a little frustrated by the aggression the Wildcats threw at him from the tip and settled for poor shots.

Though Robinson likely learned this lesson during the course of the game, Christian drove home a key point in his press conference.

“We need to understand how tough this is,” he said.

Higher competition is in this team’s future and the players will need to meet the challenge with renewed effort and a focus on execution. But the good news for the Eagles is that they get a chance just one day later to prove that they understand the level of the opposition.

Their performance in Saturday’s game will go a long way towards answering the question of whether Friday’s game was just an isolated performance indicating the need for acclimation or a harbinger of future blowouts to come.