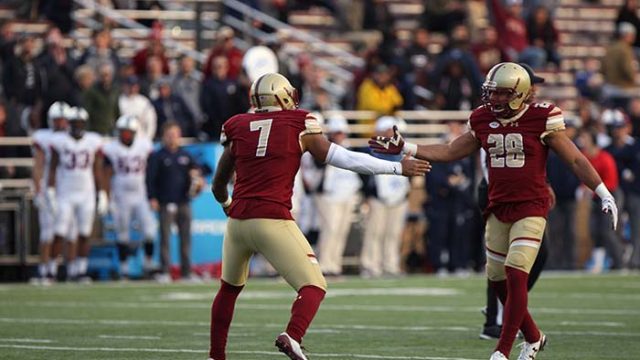 Believe it or not, Boston College football might actually make a bowl game.

The Eagles (5-6, 1-6 Atlantic Coast) closed out their home schedule with a dominating 30-0 victory against the lowly Connecticut Huskies. Despite a scoreless tie after the first quarter, BC controlled all facets of the game. The Eagles’ offense possessed the ball for 40:06, collecting 337 total yards within that time. Quarterback Patrick Towles played arguably his best game of the season. He efficiently completed 14-of-19 passes for 183 yards and a touchdown, in addition to 25 rushing yards on eight carries. The BC defense was relentless all afternoon, as well. BC limited Connecticut to 121 total yards and forced four turnovers, including three interceptions. Connecticut couldn’t even get in range to attempt a field goal and simply had no response for the Eagles’ defense.

Despite many frustrating and embarrassing losses this season, the Eagles actually have an opportunity to participate in postseason play. Even with a loss Saturday in the regular season finale at Wake Forest, BC can still somehow make it to a bowl game. This is possible because of the Academic Progress Rate, which the NCAA introduced to measure and track student-athletes’ chances of graduation. Schools with high APR’s, like BC, have been rewarded in a tiebreaker system to fill out all 80 spots available in the bowl games if there are not enough 6-6 teams. Last season, San Jose State, Nebraska, and Minnesota qualified for bowl games despite 5-7 records, and all three teams actually won their respective games. Nevertheless, Towles and the Eagles know they cannot bank on the APR getting them into a bowl game and need to take care of business against the Demon Deacons (6-5, 3-4).

“Everything we’ve got into this one,” quarterback Patrick Towles said after practice on Tuesday. “Our goal during season was to play in the postseason. That opportunity is still sitting out there. We’ve just got to go out and get it.”

In many ways, Wake Forest is similar to BC, especially offensively. BC holds a slight edge in total rushing, where it’s 94th nationally compared to Wake’s 101st ranked rushing attack. Meanwhile, Wake Forest is 114th in total passing offense, just above BC’s 120th passing game. Put it all together, and you’ve got two teams who have the top-five worst offenses in the country.

The defenses, however, is what set these teams apart and could impact the outcome of the game. The Eagles are 12th in the country in total defense and are coming off of a shutout performance on Senior Day. While Wake Forest is ranked 51st, the Demon Deacons have made impact plays throughout the year that make their defense a legitimate force. Wake Forest is top-10 in the nation in forcing turnovers, top-20 in sacks, and top-35 in tackles for loss. These big plays have allowed the Demon Deacons to seize momentum within a game, something the Eagles have to be cautious of on Saturday.

“They have played a lot of games this year where people have had four and five turnovers on them,” head coach Steve Addazio said in his Monday press conference. “I think they play really sound. They’re sound in the coverage.”

In order to neutralize Wake Forest’s pressure, BC’s offense must take care of the football and practice discipline to maintain control of the game like it did against UConn. While the Eagles would love to own time of possession again, they at the very least need to avoid self-inflicted mistakes like turnovers and penalties. Although these areas haven’t killed BC this season, they definitely aren’t strengths. The Eagles are 65th in turnovers with 17 in their first 11 games and 86th in penalty yards per game at 58.64. For a BC offense that is one of the country’s worst, it is in danger of surrendering huge defensive plays for the Demon Deacons, hindering the Eagles even more on that side of the ball. Discipline is key for the Eagles to give their offense a fighting chance against Wake’s defense.

“They’re a heck of a football team,” Towles said. “Very well coached. Very disciplined on defense. They’re top-10 in turnovers in the country. They do rely heavily on that. We’ve got to take care of the football. If we stay disciplined, we’ll be fine”

As they hope to subdue Wake Forest’s defensive pressure, the Eagles’ defense needs to come away with an impact play or two of their own to take control of the game. BC has forced 20 turnovers in 11 games so far this season, which is the 32nd most in the country. With Wake Forest having health issues at quarterback down the stretch in the season, the Eagles can pounce on Wake’s struggling offense. While BC hasn’t had to rely heavily on forcing turnovers this season, winning the turnover ratio against a team that depends on it like Wake Forest will go a long way to help the Eagles become bowl eligible.

Wake Forest head coach Dave Clawson said that his team would play like it’s the Super Bowl. With the season on the line, BC will have to play the same way to guarantee a birth in the postseason. Addazio and the Eagles know the mission and know what they have to do: “Get to a bowl. Get to a bowl.”