Home » Eagles Struggle in the Paint, Excel on the Perimeter in Loss to Crimson 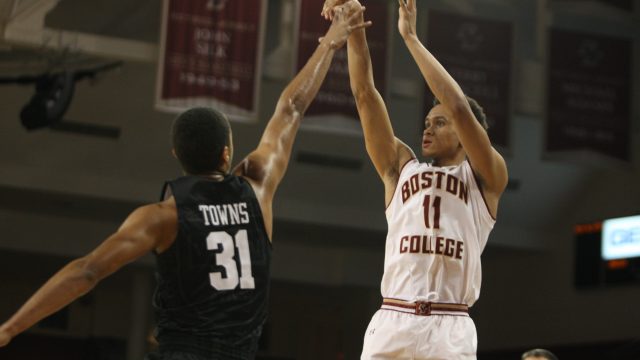 Eagles Struggle in the Paint, Excel on the Perimeter in Loss to Crimson

With just over a minute left in the game, Jerome Robinson sized up a wide open 3-point shot. The best player on Boston College men’s basketball had an opportunity to cut the deficit in half, but the ball clanged off the side of the rim. As the rebound fell into the hands of guard Corey Johnson, the crowd of over 3,000 sighed in frustration. The Eagles failed to show up defensively in the first half and couldn’t battle back in time, as Harvard left Chestnut Hill with a 74-66 victory.

Jerome Robinson: For the sixth time this season, Robinson led BC (4-4) in scoring. The sophomore recorded 25 points on 10-of-23 shooting to go along with a team-leading six assists. Robinson did not miss a minute on the court, as the struggles of the other guards forced head coach Jim Christian to leave him in the game throughout the contest.

“I didn’t come in and say ‘Hey, we’re going to play Jerome 40 minutes,’” Christian said after the game. “Out of necessity tonight, we had to.”

Despite the tough miss at the end of the game, Robinson was definitely a bright spot once again.

3-Point Shooting: The Eagles entered the night tied for third in the ACC in 3-point field-goal percentage after converting an impressive 40 percent of the team’s 3-point shots during the first seven games. BC improved that percentage during on Wednesday night, hitting 11-of-26 attempts from beyond the arc. Robinson and A.J. Turner led the way with three each. BC nearly doubled Harvard’s number of made 3-pointers, although the Crimson were slightly more efficient.

Second-Half Defense: Compared to the first-half defense, the second-half defense was lights out. The effort was much better in the second half and it showed on the stat sheet. After allowing 57.1 percent of Harvard’s first-half shots to go in, the defense only gave up 38.5 percent of the second-half attempts. Limiting the Crimson to two 3-point conversions in the second half allowed the Eagles to climb back into the game. That being said, the putrid first-half defense handed Harvard 46 points and a 16-point lead at halftime, so it is difficult to praise the overall effort.

Interior Defense: The Eagles struggled to defend the paint all night. Forward Chris Lewis came into the night averaging a measly 4.1 points per game, but the freshman ripped off 22 points on 9-of-12 shooting. Christian tried a few different forwards, but nobody seemed capable of defending the interior for more than a few possessions.

“We were moving anybody there,” Christian said. “I would have moved you [the reporter who asked the question] there if you were eligible.”

The BC defense struggled with hedging on ball screens, allowing Harvard’s speedy guards to enter the paint and find open forwards. This problem must be fixed before conference play or the many talented forwards in the ACC will feast on simple screen plays.

Free Throws: The Eagles struggled to get to the line all night. Harvard tripled BC’s free-throw attempts, converting 16-of-18 in the process. Struggling in the paint on defense and then failing to be physical on offense is a poor formula.

“I think we avoided a lot of contact,” Christian said. “When we were driving in, we were trying to shoot the ball over them instead of jumping into their body and that is something that has been a problem for us.”

Shooting 3-pointers well is an asset, but not if it means ignoring the paint. In fact, the Eagles could become even more efficient from deep if the team can find an interior presence and force the defense to collapse on the forwards.

Freshman Guards: The struggles of the freshman guards were part of the reason Robinson had to play the entire game. Ky Bowman and Ty Graves combined for nearly one-third of the team’s turnovers in a combined 39 minutes played. Bowman started the game, but quickly racked up three turnovers and found a seat on the bench. He had been averaging over 18 minutes per game, but only saw the court for nine minutes on Wednesday. The Eagles needed their freshmen to step up and match the intensity of Harvard’s speedy guards, but they did not show up. This ultimately forced Christian to avoid a full-court press that could have changed the pace of the game.

“We had Jerome in the game, Tava in the game,” Christian said. “Not our fastest team out there. You are going after two point guards who are rockets.”

Since the team’s quicker freshmen guards weren’t playing effectively, the full-court press was not an option. 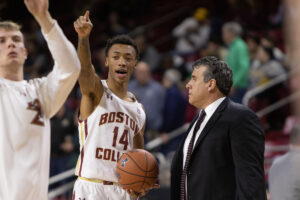