Home » Robinson Knocks Down 32 in Win Over Sacred Heart 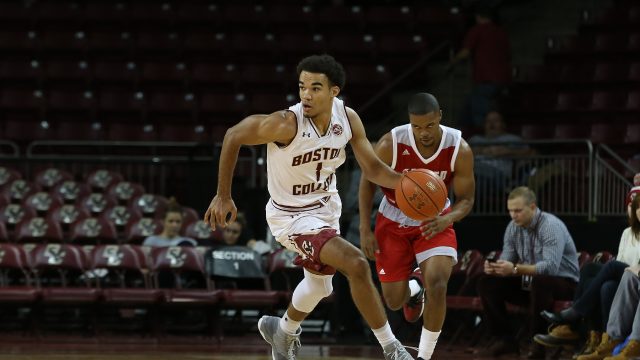 Robinson Knocks Down 32 in Win Over Sacred Heart

Another whistle blew from underneath the Sacred Heart basket. The smattering of Boston College men’s basketball fans poured out a sensational amount of boos. Jim Christian joined in—not with a boo, but with an emphatic turn away from the officials, flailing his arms out, resigned to the calls going against his Eagles. If the native New Yorker’s actions could speak, they’d likely be saying “fuhgeddaboudit.”

Yet Jerome Robinson remained unfazed by the 14-2 run by the Pioneers and the prospects of dropping another winnable game to a (theoretically) inferior non-conference opponent. The sophomore guard demanded the ball, pulling up from 3-point land. In the process, SHU’s Charles Tucker knocked him onto the floor for a foul.

While on the hardwood, Robinson chucked up double threes with his fingers. He knew that ball was going in before it switched through the net. The Eagles didn’t have to worry again after all.

With a career-high 32 points, Robinson willed the Eagles to a 82-75 victory over Sacred Heart. It was the seventh time Robinson had broken the 20-point mark this season. That total is also the fourth-highest among ACC players this season. For Christian, Robinson’s ability to remain calm was a huge benefit for his club.

“He let the game come to him, he didn’t get emotionally down, he didn’t take crazy and wild shots,” Christian said.

The Eagles (6-5) didn’t even get anything out of him for the first seven minutes against Sacred Heart (5-7). Robinson didn’t make an attempt, allowing his teammates to take the early charge. A.J. Turner got the scoring started with a 3-pointer. Mo Jeffers challenged the Pioneers’ equally undersized forwards inside with a few early points. And Ky Bowman kept attacking the basket with reckless abandon, with every play looking like that game-winner he set up for Nik Popovic against Auburn.

When Robinson finally got onto the scoreboard, he did it in stylish fashion. His first two attempts were a spinning layup around Sacred Heart’s Quincy McKnight and a two-handed dunk off a turnover he forced.

The Eagles also showed off good ball movement in the first half. On one play, Turner teased a floater in the lane, before no-look passing it over to Popovic for an easy floater. On another, BC let the clock tick down to the end of the shot clock before launching a Draymond Green-esque 3-pointer—doing it while kicking out his right leg. Defensively, the Eagles kept the pressure on the Pioneers—in total, they forced 21 turnovers.

Yet the second half became a struggle for BC. Led by McKnight and Joseph Lopez, Sacred Heart stormed back with the aforementioned long run. Even worse, BC allowed the Pioneers to get into the bonus by the 15 minute mark. It was the kind of effort that frustrated Christian and left him questioning why his team cannot pull away from lesser opponents. Christian guesses that it isn’t because he lacks players with the skill to win, but rather the sense of mind to put in the dagger.

“I’m talking more mental mistakes than physical mistakes,” Christian said. “It seems like every time we get a chance to put somebody away, we’ll make three or four mental mistakes in a row.”

Fortunately for Christian, he has a player like Robinson. Immediately following that big 3-pointer, Robinson chased down McKnight for a huge block. Robinson matched the Sacred Heart star shot-for-shot—and he’d need to, considering McKnight finished with 36 points.

With the Pioneers holding close, the Eagles turned to their veteran 3-point specialist, Jordan Chatman. The 23-year-old didn’t have a strong game against Auburn from deep, and was barely a factor for much of the game. Yet on back-to-back possessions, Chatman knocked down 3-pointers off turnovers to push BC’s lead to double digits. At that point, the Eagles had little reason to worry.

“It was good to see him shoot the ball with confidence,” Christian said. “I’m not surprised he knocked down those in a row.”

Once again, without Robinson, the Eagles would have been in serious trouble. The road gets harder from here, especially once ACC play starts on Jan. 1. Christian recognizes this, too, and how imperative it is for a second scorer to rise up. But for now, as long as the Eagles do have Robinson, there’s no doubt they’ll be in every game til the end.