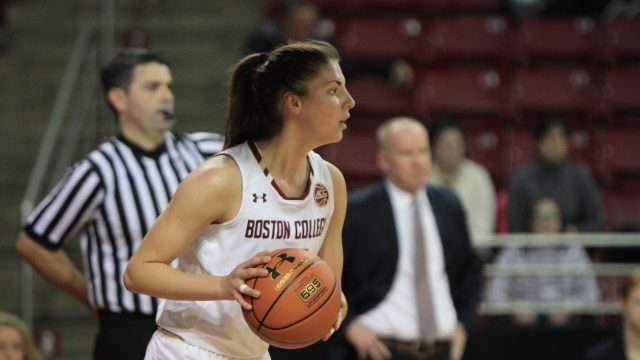 Boston College women’s basketball isn’t accustomed to height advantages. The Eagles are often undersized against ACC opponents, who push them to the perimeter where they largely live and die by the 3-pointer. But on Sunday, BC made the paint its personal playground, towering over Central Connecticut State in a dominant 66-46 victory.

Mariella Fasoula and Emma Guy, who stand 6-foot-4 and 6-foot-3, respectively, established an inside presence early for the Eagles (5-6). The frontcourt duo grabbed three rebounds each in the first quarter alone, helping BC to a 16-13 lead after the opening 10 minutes. Fasoula also added three buckets, part of her team-high 14 points.

With effective team defense, the Eagles began to stifle the attack of the Blue Devils (1-9). CCSU’s 13 points in the first quarter were more than it would get in the next two quarters combined. BC’s defense fueled its offense, sparking a 7-0 run to start the second quarter. The guards complemented the gritty play of BC’s forwards down low with a shooting display from beyond the arc. Senior sharpshooter Kelly Hughes drained a triple to extend the Eagles’ lead to double digits before a pair of free throws by Andi Lydon brought the Blue Devil deficit back down to eight. BC closed the half with five straight points, bringing a 14-point lead into the locker room.

The Eagles’ momentum didn’t dissipate in the third quarter thanks to Hughes, who drilled two more 3-pointers as part of a 13-4 run to open the quarter. Emilee Daley also had the hot hand from downtown, hitting 3-of-5 attempts from beyond the arc and finishing with 11 points, five rebounds, and two assists. They would continue the lopsided pace, outscoring CCSU 24-8 in the third quarter to take a 30-point lead into the final frame.

Head coach Erik Johnson opted to rest his starters in the fourth quarter, allowing the Blue Devils to chip into BC’s insurmountable lead. It took three minutes for the Eagles to secure their first basket, but the rookie-filled lineup received some valuable playing time in the waning minutes of the contest. Freshman Shannon Ryan tallied her first collegiate point, and freshman Jasmine Taylor put up four points and four rebounds. BC finished with 22 assists on its 28 field goals, a season-best.

BC’s performance on the boards was truly impressive. Five Eagles finished with at least five rebounds, and the team outrebounded CCSU 47-24. But with the arrival of big-time programs and the conference schedule comes big-time players who will not concede the paint so easily.