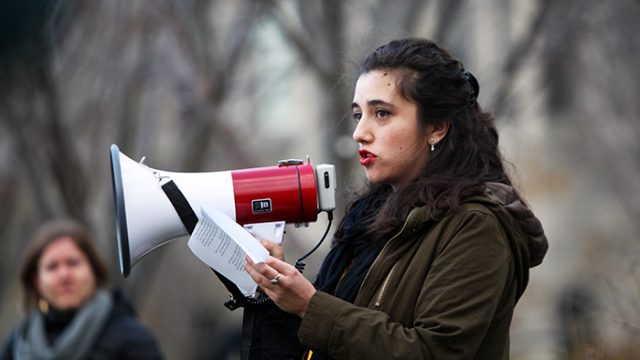 Several members of Eradicate Boston College Racism, an unregistered student group, received disciplinary summons for their involvement in two demonstrations this fall that were not registered with the Office of the Dean of Students. The students received the summons on Dec. 6 and 7.

The first rally was held on Nov. 14 in response to the election of Donald Trump, and the second was held on Dec. 1 as part of a nationwide walkout in support of protecting undocumented students. According to the University’s student conduct guide, “participation in a demonstration without prior authorization could result in conduct action.” This is not the first time members of Eradicate have received notices of disciplinary actions from the University.

Eradicate released an email on its Facebook page on Dec. 9 addressed to Dean of Students Thomas Mogan and assistant deans of students Corey Kelly and Kristen O’Driscoll.

“There is no evidence that the students whom you have arbitrarily identified as leaders in these solidarity demonstrations had any greater role in organizing these events than did other speakers or participants,” the email stated.

They also argued the sanctions violate students’ rights to freedom of speech and freedom of assembly, which they write are protected by the Massachusetts Civil Rights Act.

The group has received support from over 230 members of the BC community, including students, faculty, and staff who signed a letter of solidarity in support of the students who received disciplinary summons. Those who signed the letter agreed to receive the same punishment as those who were cited by the University if the University decides to take action against the students.

“As a matter of policy, the University does not discuss specific disciplinary cases,” University Spokesman Jack Dunn said in an email. “As with all colleges and universities, however, the dean of students is responsible for upholding the conduct guidelines that are stated in the Student Guide and pertain equally to all students.”

Sarah Wunsch, deputy legal director of the American Civil Liberties Union of Massachusetts, has been in communication with Eradicate in the last few weeks.

“If they are disciplined, there could be a lawsuit,” Wunsch said. “I’m hoping Boston College looks around the country and sees … [how other] universities are officially holding rallies.”

“The University is within its right to hold them to the same rules and standards that apply to all BC students regarding campus demonstrations.”

Wunsch was involved with Students for Sexual Health in 2013, after the group was sanctioned by the University. Wunsch disagrees with the University’s rule on registering protests.

“It’s crazy on a college campus, where people should be encouraged to get involved and speak out, to have a rule that requires advanced registration and approval,” she said.

The students who received disciplinary warnings will face administrative hearings and could be subject to disciplinary probation, University probation, suspension, or expulsion, according to the University’s student conduct guide. Dunn, however, told The Boston Globe that expulsion is “not within the realm of possibility for this type of incident.”

Dunn said that the students are facing discipline not for participating in the demonstration, but for failing to register it with the University. As a non-registered student group, however, Eradicate is unable to register demonstrations.

“The University is within its right to hold them to the same rules and standards that apply to all BC students regarding campus demonstrations,” Dunn said to The Boston Globe.