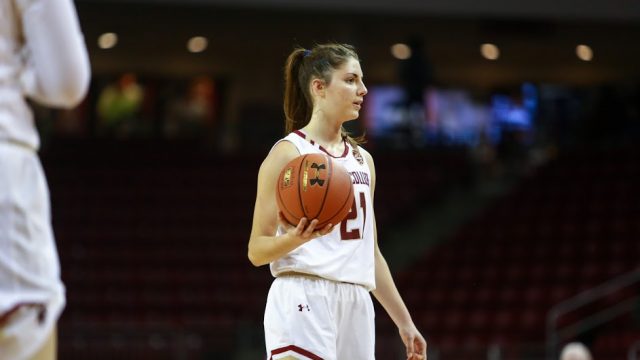 As most students left the Heights for Christmas break, Boston College women’s basketball welcomed guests to Conte Forum: Dartmouth College, who arrived to try to snap the Eagles’ three game win streak. The Big Green overcame an early deficit with a strong second quarter to keep the second half of the game relatively close, but the Eagles eventually pulled ahead for the 65-53 victory.

BC (6-6) and Dartmouth (4-7) came out of the gate slowly, going more than a minute without scoring. But Kailey Edwards would strike first, accepting Kelly Hughes’s pass and sinking a jumper to get the Eagles on the board. Over the next three and a half minutes, Hughes and freshmen Emma Guy and Georgia Pineau contributed eight points to give BC a double-digit lead.

Dartmouth’s Kate Letkewicz drained a three and an assist to Fanni Szabo to quickly cut BC’s lead in half. Down 10-5, the Big Green needed to make defensive stops and employ an aggressive offense to keep the game close. But for the remainder of the first quarter, the Eagles pulled away behind contributions from Hughes, Edwards, Emilee Daley, and Martina Mosetti. Heading into the second quarter, the Eagles had a comfortable 22-10 lead.

Edwards and Katie Quandt opened scoring for BC in the second half, adding to the lead. But Dartmouth hit a rhythm, defending the Eagles well and dominating on offense. Amber Mixon hit a trey to spark the offensive flurry for the Big Green. Letkewicz, Isalys Quinones, and Olivia Smith all contributed points to cut into BC’s lead. With less than four and a half minutes to go in the half, Letkewicz made a three to cut the lead to 28-26. A little more than 30 seconds later, Quinones grabbed an offensive rebound and kicked the ball out to Andi Norman beyond the arc. Norman sank a three to give Dartmouth its first lead of the game at 29-28. Szabo hit another three a few minutes later to push the Big Green’s lead to 32-28, but a Katie Quandt layup ensured that the Eagles would only be down two at halftime.

The game remained close for much of the third quarter, with Dartmouth maintaining a lead for the first five minutes. Halfway through the quarter, however, Edwards made a pair of free throws to tie the game at 35 apiece. With four and a half minutes to go in the quarter, Taylor Ortlepp regained the lead for BC. Edwards drove to the lane and missed a layup, but Ortlepp grabbed the offensive board and put it back up to give the Eagles a 37-35 lead. From there, BC never looked back, closing out the third quarter with a 49-41 lead.

The fourth quarter saw the Eagles maintain their lead. Pineau and Edwards converted free throws early in the quarter to build the lead. Guy and Edwards sank layups. With four minutes to go in the game, BC’s lead had grown to double digits again, with the Eagles leading 58-47. The next three minutes saw a dry spell for BC, but it prevented Dartmouth from scoring more than three points in that time period, preserving its comfortable lead. Mosetti broke the dry spell with a free throw with one minute to go. In the final minute, Hughes and Edwards contributed two free throws each to pull away even more from the Big Green. Edwards sank a layup in the closing seconds of the game to lock down the final score.

BC relied on Edwards in its victory. The graduate student contributed 16 points, six rebounds, and two assists over 35 minutes of play. She shot a perfect 6-for-6 from the charity stripe. Guy and Hughes also made all of their free throws, with both players attempting two in the game. Dalee went 1-for-1 from the line. Overall, the Eagles shot almost 70 percent from the line in their fourth straight victory.