Home » Bowman’s Career Night Is Not Enough to Outlast Fairfield 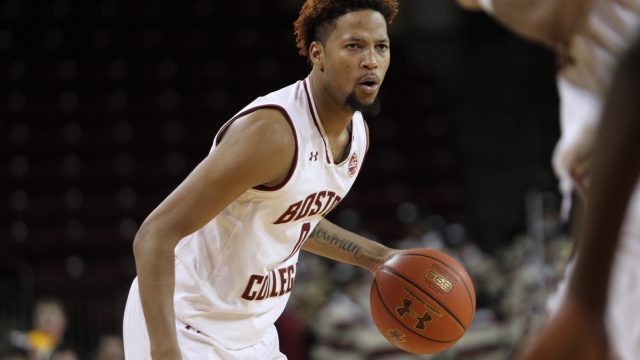 Bowman’s Career Night Is Not Enough to Outlast Fairfield

In Boston College men’s basketball’s victory over Sacred Heart on Sunday, the Eagles’ defense limited the Pioneers to just 2-of-19 shooting from beyond the arc. And, over the course of the season, head coach Jim Christian’s crew has held its opponents to under 30 percent from 3-point land. But on Wednesday night, a speedy and selfless Fairfield group cracked the code with swift ball movement and a constant green light from deep.

The Stags, who jacked up 42 shots from long range in their loss to NC State, continued to fire away in the Birthday of Basketball Classic at the Mohegan Sun Arena. They sunk eight alone in the first half, which propelled the team to a lead that it would never concede. While it was far from pretty, Fairfield hit close to 40 percent of its shots from 3-point territory and snapped its three-game losing streak with an 89-83 upset win over the Eagles (6-6).

It didn’t take long for the Stags (6-4, 1-1 Metro Atlantic Athletic) to get rolling. Following a Connar Tava turnover on BC’s first possession of the game, Curtis Cobb drained a 3-pointer from the wing. The shot was the first of four that the sophomore would make in the opening 10 minutes of the period.

Initially, Jerome Robinson responded on both sides of the ball. This past week’s ACC Co-Player of the Week knocked down a pair of mid-range jumpers and forced four steals in the first five minutes of play. But as time went on, Tyler Nelson made the necessary adjustments to limit the Eagles’ primary scorer.

The latter portion of the first half was defined by a number of offensive runs. After BC strung together an 8-0 run to take a three-point lead, Fairfield countered by scoring 14 of the next 15 points. Then, Ky Bowman led a 10-point BC attack to tie the game at 25 apiece. But the Stags would get the last laugh—now with Jerry Johnson in on the air raid, they finished out the period outscoring the Eagles 22-12. Although BC entered halftime trailing 47-37, it did close out the half with a Robinson fastbreak 3-pointer.

AJ Turner, the Eagles’ second-leading scorer, missed six of his seven shots in the first half. With Nelson all over Robinson, BC needed someone else to step up. Bowman, a freshman, did just that.

The guard took the court in the second half with 12 points and soon after, bested his career-high of 15. Even though the Eagles’ defense failed to slow a streaking Fairfield, Bowman continued to respond on the offensive end with an array of floaters and drives. Eventually, Robinson got back in rhythm, and BC chipped away at the Stags’ lead. That being said, the Eagles left a load of points on the floor. BC only made a bit more than half of its shots from the charity stripe, failing to convert several and-one opportunities.

Fairfield began to cool off from downtown and the Bowman-Robinson tandem was enough for the Eagles to come within two points of the Stags, as the score stood at 76-74, nearing the final minutes of the contest. Robinson drove to the basket and drew enough contact for the foul, earning a chance to tie the game from the line. But he missed both, moving him to 1-of-6 on the night. From that point forward, it became a one-man show for the Eagles.

It wasn’t Robinson, the ACC’s second-leading scorer, but Bowman who led the way.

The energetic North Carolina native matched a series of Fairfield scoring plays with two of his own—a euro-step finish followed by a steal, which created another drive and lay-in for none other than Bowman himself. Down 83-81, the deficit was back within two. After an Amadou Sidibe free-throw on the other end, BC had an opportunity to tie the game. Jeffers misfired on a turnaround shot, but Bowman boxed out, rebounded, and put the ball back up. Unfortunately for the Eagles, those were the last points they would score.

A Bowman foul on Sidibe created a 3-point play for the Stags. On the ensuing possession, Robinson missed a reverse layup, effectively ending the game.

The red-hot Bowman finished the game with a career-high 33 points—the most that any BC player has scored all season. Not to mention that the freshman also recorded eight rebounds and five assists, while only turning the ball over twice. The young guard has already made massive strides since the start of this year’s campaign.

Nevertheless, what BC needs is consistency. Robinson broke the 20-point barrier once again, but missed five from the line and could not come down with catchable passes in the lane.

Optimism remains, but the Eagles are still searching for that seventh win—one that would tie their win total for all of last season.