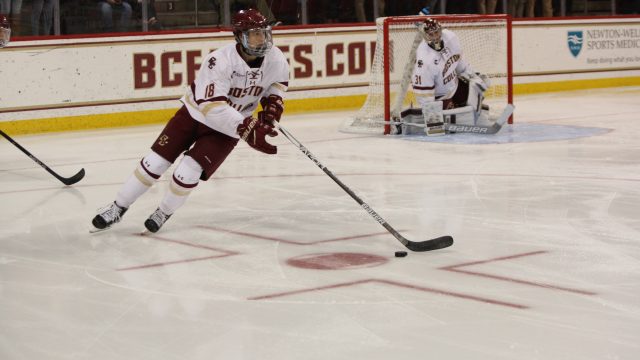 Looks can be deceiving. Although Boston College men’s ice hockey stands atop the Hockey East standings, it has already lost as many games as it did all of last season. To this point, the No. 8 Eagles’ (14-8-2, 9-2-1 Hockey East) dominant conference play has overshadowed its inconsistencies outside of the Hockey East. But now, even that is at jeopardy.

BC will take on Boston University on Monday night on Kelley Rink. The game will serve as a rematch between the neighboring schools, as the No. 5 Terriers (13-5-2, 6-2-2) closed out a 2-1 home victory over the Eagles on Friday.

The first game of the regular season series between the two remained scoreless for over 23 minutes. But as soon as the lamp was lit once, the scoring kept on coming. In fact, all of the game’s goals were tallied within a span of five minutes in the second period. BU reclaimed its one-goal lead following a Clayton Keller score. Despite whipping up 12 shots in the final period, the Eagles were denied by former Hockey East Goaltender of the Month Jake Oettinger.

The loss was somewhat of a familiar outcome for BC.

Since Nov. 18, it is 4-6-1 and has failed to string together even a pair of wins—a surprise for a team that went undefeated in the 10 games prior. Recently, the Eagles have faced a multitude of tough non-conference opponents, including last year’s national championship contenders: Quinnipiac and North Dakota. As a result, they have struggled to build any sort of momentum during the 11-game stretch.

BU is another story. Having won its past five games, the Terriers possess the third-longest current win streak in the nation. And the team is 7-1-1 in its last nine.

But while the Terriers have not left the Boston area since Dec. 10, BC hasn’t played on home ice since Dec. 6. The return for the Eagles couldn’t have come any sooner—BC hasn’t dropped a conference home game all season.

In order to get back on track and regain bragging rights, the Eagles will have to get everyone involved. In October, BC’s freshmen were clicking on all cylinders. Now, the box score is flooded with the usual suspects—Colin White, Matthew Gaudreau, Christopher Brown, and Co. It will be important for David Cotton, Ron Greco, and others to create scoring chances early. The less predictable the Eagles are, the better. Especially because BC will most likely have to score at even-strength.

Even though White scored on a power play in the last game, BU is second in the country in penalty kills. The Terriers have prevented their opponents from converting on 53 of the last 59 power plays.

Not only is BU’s special teams effective on the defensive end, but it also has no trouble creating offense. The Terriers are ranked third nationally in short-handed goals.

Lately, Jakob Forsbacka-Karlsson has had the hot-hand for BU. The sophomore is on a four-game point streak and has scored six times in the past three contests. Not to mention that Keller is on a seven-game point streak of his own.

Over the course of the season, BC has conceded its most goals in the third period. Unfortunately for the Eagles, a little less than half of the Terriers’ goals have been recorded in that very time frame. If the game is all knotted up after the second, BC goalie Joseph Woll and the backline will have stand strong.

After head coach Jerry York’s group lost to BU on Friday, the Terriers moved one game closer to dethroning their Green Line rivals. And with a BU victory at Conte Forum on Monday night, the team would capture its first home-and-home series sweep of BC since the 2001-02 season. The Terriers lead the all-time series 131-122-18, but when the Eagles play BU in Conte, they are 21-17-4.

Records aside, winning Monday’s Battle of Comm. Ave. is what really matters—not for the standings, but for pride.