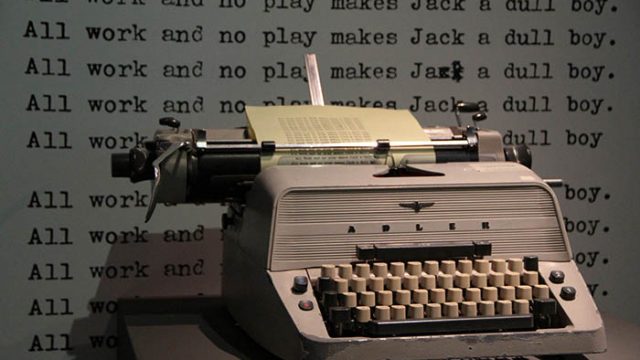 Over break, my brother and I discussed the idea—or rather, the fantasy—of writing a screenplay. Initially, my mind went to the narrative aspects and ran through a list of stories I had had in my head. In that moment, penning a screenplay was much like writing a book for publication. But I quickly pushed those ideas aside, knowing that a screenplay entails much more work and direction. Screenplays are the blueprint for a film. The nature of the writing is much different with cues to camera movement, lighting, and cuts all laced in a specific string of words, breaks, capitalizations, and more to coalesce into a film on a page.

Then I got to thinking about the nature of writing screenplays and what happens afterward. Though the conversation covered the fanciful idea of bringing a great work into the world—not the Great American Novel, but the Great American Screenplay. Understandably, when one finishes the work, it most certainly is time to reap the rewards of your labors. It is time to sell.

But I then realized film is much different from other arts in this way. Where a painting, whether hung in a truck stop bathroom stall or among others pieces in an upscale gallery, remains imbued with the beauty and intent of its creator. A book can be housed on any shelf, in any place, while its pages remain in the words of its author. A screenplay’s final iteration is, naturally, on the screen. The original intent of a finished film and a screenplay can be markedly different.

I began to think of people who make careers of it. Making visions incarnate, pouring passion into every letter, and seeing flashes of your narrative played out just as you imagined on screen only to sell the dream must be wretching to some. The work into which you may have poured your heart will be sold. Its pages may collect dust and discolor as they float from desk to desk or become lost altogether.

Another terror crossed my mind—a worse fate to befall. Your work falls into the hands of the incapable, creating a film that shares nothing with your dream other than name. A mishmash of elements will ramble along in horrid fashion, as this director’s vision neglected your own and substituted it with a cheap alternative. Your name will read on screen, but the images on screen are a far cry from what you intended. At best you may be forgotten, at worst you are remembered. Maybe this is how George Lucas feels.

Even if met with success, much of the film’s lavish praises will be heaped on actors and the director rather than a person behind the scenes like a writer.

With all these unfavorable possibilities, I wondered why write them at all, unless you were to do it yourself. At least, how could someone not in the business get exposure to attract attention of those who could bring their screenplay to life? Given the choice or chance, I am sure most screenwriters would direct their own films given the experience. But few are afforded that luxury so it seemed a fruitless endeavor.

My brother then said something that resonated with me. Many of the stories he had envisioned in his mind has faded away or atrophied. They became distant as new stories arose or they failed to retain his interest. In this way, if one does not write these stories down, they are like to be lost in the streams of our own consciousness. And that made sense to me.

To pluck these things out of the mind is not only for the individual, but for the collective. Films are a collective experience. The cinephile community begets great writers and it is in their inclinations to share their stories with others. So many people, from the production assistants on set, to those who seat themselves in the theater, are involved in the film experience. That includes screenwriters, too. Everyone serves to pass along the narrative, no matter where one stands on the track.

This demands of me to take hold of the stories I have before they escape me, as all things do in time.