Home » Previewing BC Basketball 2016-17: What to Expect Against Miami 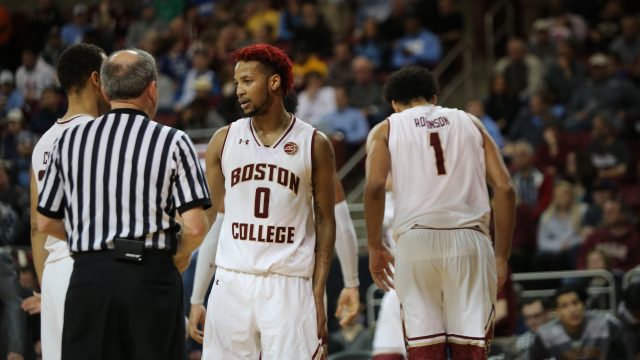 Previewing BC Basketball 2016-17: What to Expect Against Miami

By this point in the 2016-17 college basketball season, it is no secret to anyone in the country that Boston College men’s basketball can compete with anyone—that is, if its young backcourt of Ky Bowman and Jerome Robinson are on point. In the Eagles’ recent game against North Carolina on Saturday, the duo combined for 51 points, including seven 3-pointers from Bowman. BC kept the game close right down to the buzzer in a 90-82 loss against the No. 9 Tar Heels in front of a sold-out, exuberant crowd at Conte Forum. That same night, before a national audience, Jay Bilas declared that the Eagles “[are] no easy out anymore” as he called the Duke-Miami game on ESPN.

BC (9-11, 2-5 Atlantic Coast) will look to ride the momentum of its solid performance against one of the nation’s best teams on Wednesday as it heads south to face the University of Miami (12-6, 2-4). The Eagles have had extremely varied results in conference play this season, with arguably their two worst performances occurring in road contests. On Jan. 3, BC fell 79-66 at Wake Forest as it shot just 36 percent from the field and 16.7 percent from 3-point land. A couple of weeks later, the Eagles dropped a road game to Syracuse, 76-53, turning the ball over 20 times and shooting just 39 percent from the field. Wednesday will mark an opportunity for the Eagles to pick up their first ACC road win of the season.

Throughout conference play, BC has fallen victim to several slow starts which have proven to be too much to overcome. Keeping the game close at halftime is crucial, as the biggest halftime deficit the Eagles have overcome this season is a four-point margin against Providence College. On the road, it is especially important to get off to a hot start. While Miami’s home court, the Watsco Center, is the smallest arena in the ACC with a capacity of 7,972, it was, on average, 90 percent full last season. If BC can come out and hit its shots early on, it can take advantage of the 9 p.m. start time, which will make people more inclined to head home from the game early. Miami has had mixed results in conference play this season with its only two wins coming against NC State and Pittsburgh. The Eagles are catching Miami at a good time to put an end to their 11-game winless drought against the Hurricanes that dates back to 2010.

Last time they played: The Hurricanes visited the Heights last January as the No. 15 team in the country. Seniors Sheldon McClellan and Angel Rodriguez led the way for the Hurricanes as they handled the Eagles, 67-53. Entering this contest, BC was riding a four-game losing streak in conference play, with an average margin of defeat of 22.5 points. Despite this statistic, the Eagles kept it close in the first half as the Hurricanes led 29-28 at halftime. The second half saw the Eagles shoot a measly 25.8 percent from the field as the Hurricanes pulled away. Miami seven-footer Tonye Jekiri killed the Eagles inside, grabbing 17 rebounds and protecting the paint on defense. While BC fans had little to cheer for, they got a taste of Robinson’s ability to put up solid numbers against high-caliber teams. The freshman tallied 20 points on 9-of-14 shooting while being covered by McClellan, who currently plays for the Washington Wizards.

Miami Scouting Report: One year removed from their second Sweet 16 run in four seasons, head coach Jim Larranaga has them poised to make the tournament once again. After losing three of their five starters from last year in McClellan, Rodriguez, and Jekiri, Larranaga brought in the first top-10 recruiting class in school history. The cornerstone of that recruiting class is Bruce Brown, who hails from Wakefield, Mass., and has replaced McClellan at shooting guard. Junior guard Ja’Quan Newton has also been inserted into the starting lineup at point guard after playing the role of sixth man last year. Brown and Newton have meshed well in the backcourt with three-guard Davon Reed, who is the Hurricanes’ top returning scorer from last year.

Much like BC, Miami relies heavily on its talented guard play to set the tone. Brown, Newton, and Reed have scored 57 percent of Miami’s points this season, each player scoring consistently in double figures. Newton is the primary facilitator on offense for the Hurricanes as he leads the team with four assists per game. Newton is a driving point guard who will look to penetrate and score on layups or dish the ball back out to the perimeter. He has attempted just 27 3-pointers this season. Brown has a similar playing style as he scores mostly inside the 3-point line and collects 6.9 rebounds per game. Brown and Newton will look to kick it out to Reed at the 3-point line who shoots 40.4 percent from downtown. Reed has been the top scorer for the Hurricanes this season, averaging 15.4 points per game.

Miami lacks the presence inside that they had last year in Jekiri, a two-time All-ACC Defensive Team honoree. Forwards Kamari Murphy and Anthony Lawrence will most likely get the majority of the minutes for the Hurricanes on Wednesday at the four and five position. Murphy and Lawrence are 6-foot-7 and 6-foot-8, respectively. They do not provide the same shot-blocking ability that Jekiri did last season, and are not particularly talented scoring the ball inside. Dewan Huell, a 6-foot-11 freshman and former five-star recruit, will provide size and scoring ability off the bench if Miami will look to challenge the Eagles’ small frontcourt.