Home » Two Early Goals Are All Woll Needs in Masterful Performance vs. Connecticut 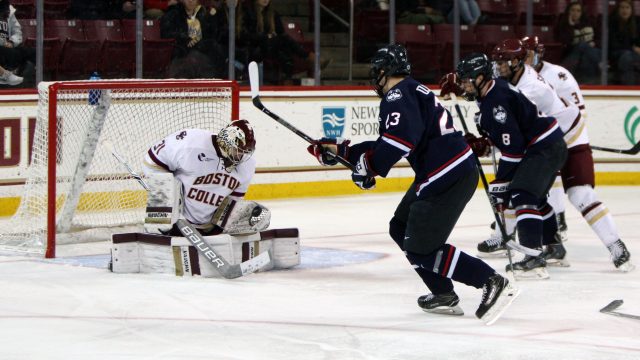 Two Early Goals Are All Woll Needs in Masterful Performance vs. Connecticut

Leg up and screaming toward the near-right corner, Spencer Naas raised his hands and right leg in celebration. The first-line forward from the University of Connecticut had just gotten the equalizer past Joseph Woll early through the third period. It had taken a scrum and several missed rebounds to get through the goaltender for Boston College men’s hockey, but Naas had done it.

Woll, however, wasn’t convinced. He called on the referees to review the goal. Sure enough, they agreed. The zebras determined that Kasper Ojantakanen had interfered with Woll, knocking him onto the ice and out of the way. That hit gave Naas, his celebration now for naught, the window through which he could score.

But, truth be told, pushing Woll out of the way was the only way the Huskies had any chance at all.

The freshman from St. Louis, Mo. put together his most masterful performance of the season on Tuesday night against the Huskies. Anchored by two goals in the first 88 seconds of the game, Woll survived three third-period UConn power plays. And, with 42 saves, the Eagles escaped with a 2-1 mid-week home victory.

“He probably cost us a couple of points tonight,” UConn head coach Mike Cavanaugh said of Woll’s performance. “He’s a World Junior caliber goaltender. He was big, he was strong, and we just had trouble putting pucks by him.”

Jerry York agreed with his former assistant’s sentiment, likening Woll’s performance to a “pitcher throwing a shutout in a pennant race.”

Throughout the game, UConn (9-10-6, 5-6-2 Hockey East) forced Woll to his backside with heavy pressure. In the first, Maxim Letunov tried to swallow up a rebound, but Woll recovered handily. He handily snatched pucks out of the air with the collection of a senior. Many of his rebounds could be pushed to the side without much fret.

He continued his magic on a BC (16-9-2, 11-3-1) power play late in the frame. Connor Moore attempted a big shot from the blue line, but it was stolen by Corey Ronan. The third liner dashed down the ice, 2-on-1 with Brian Morgan, with Woll left out to dry.

Yet the goaltender stood on his head for one of his many amazing stops. When Ronan dished it late to Morgan, Woll was there to push it out to the far boards. The save forced Woll far out of the crease, allowing Ronan a wraparound chance on an empty net. But, aided by David Cotton, Woll recovered in time to keep the puck out of the net.

Unlike Friday’s game against Massachusetts, the Eagles’ defensemen routinely got burned in the second period. Michael Campoli—in place for an injured Jesper Mattila—and Luke McInnis often allowed UConn’s first line to dance around them in the frame. The miscues left Woll on an island, especially following a silly too many men on the ice penalty by BC. On that one, Woll got burned by Tage Thompson, one of the conference’s best goal scorers, who was left all alone for a power-play goal.

Yet following the Thompson goal, Woll’s defense began to stand up for him, too.

In the third period, the Eagles’ three best forwards—Austin Cangelosi, Colin White, and Ryan Fitzgerald—each took penalties, calls that York referred to as “marginal.” But instead of needing to make big saves, BC’s penalty kill did a superb job preventing “Grade A” chances. In particular, Graham McPhee and Julius Mattila stunningly kept the puck away in the neutral zone and away from the Huskies’ attack—they were particularly solid on a 6-on-4 attempt with the empty net and under two minutes to go. And, though UConn outshot BC, 43-26, only three of its attempts came on the power play.

Woll’s performance isn’t to say York was pleased with his team’s effort. BC began with that hot start, as only 54 seconds in, Michael Kim received a feed from Moore at the right circle. The defenseman went high to the left on UConn’s Rob Nichols for the game’s opening score. A mere 34 seconds later, J.D. Dudek took advantage of a lazy change by the Huskies, getting what ultimately became the game-winning goal.

Yet from that point on, the Huskies took over possession. Even on a 5-on-3, the Eagles couldn’t gain anything more than one solid chance from Casey Fitzgerald. York believes that those goals may have been just too quick.

“We got a great start, but sometimes that backfires.” “It kind of affected our play a little bit.”

Still, UConn’s “58-minute hockey game,” as Cavanaugh put it, was enough for the impeccable Woll. And if the freshman from the Midwest can continue to put up performances like Tuesday night’s, the Eagles will run away with points even on their worst days.