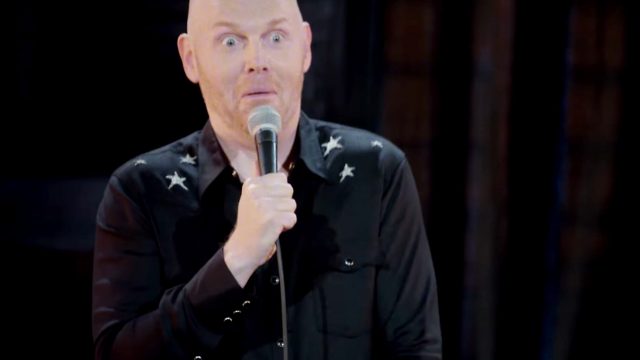 Bill Burr Challenges the Oversensitive Mainstream in ‘Walk Your Way Out’

In his new Netflix stand-up special, Walk Your Way Out, Bill Burr stays true to his comedic style of shocking the audience with his unabashed viewpoints and expertise. Burr tackles a new set of politically incorrect topics including fat-shaming, drunk driving, and the recent United States presidential election, while still returning to some of his favorite topics, like overpopulation and the practicality of genocide. As always, Burr chooses to say the things that no one should say, and always wins the audience back with his wit and authenticity. As in his previous specials, he delights in making the audience feel uncomfortable and eliciting laughter from the most off-limit topics.

When they first come out of his mouth, Burr’s statements may come across as rude or unsettling. Audiences will find that simply sitting back and enjoying the comedic process instead of taking offense will yield a more enjoyable experience. More often than not, Burr will win viewers over to his side with his straightforward no-nonsense reasoning—softening them with self-deprecation and honesty.

On the issue of fat-shaming, Burr picks the unpopular opinion, with no fear or regard for the repercussions. Many may be quick to deem Burr ignorant and insensitive upon first hearing him call plus-sized models and actresses “fatties.” After he points out the absurdity of a world where no one feels shame and the use of the word “brave” to describe a model who takes their clothes off, it’s hard not to laugh at the truth in what he is saying. Burr may initially come off as a judgmental jerk, but he manages to quickly win the audience over with his acknowledgement of his own physical insecurities and of the struggles we all deal with to stay in shape.

At another point, he discusses the banal topic of Kanye West’s inflated ego. In classic Burr fashion, he takes a fresh perspective on the dangers of such a personality type, but not before making a wild claim to shock the audience. He says after hearing a West interview his thought was “Thank God it’s just a black guy.” At first glance, this seems like a racist statement. Jumping to conclusions will have viewers missing out on the humor and a thought-provoking statement about racism. He makes the point that if such a big ego ended up in a white guy, we would probably have another Hitler on our hands. So in a way, as Burr points out, it is good this trait ended up in a black guy because the systemic racism in our society will keep him from ever accomplishing anything more impactful than offending some people and interrupting award shows. Burr manages to make people laugh by drawing a humorous parallel between West and Hitler while also acknowledging the issue of systemic racism.

When it comes to politics, Burr once again takes the unpopular stance and stays clear of choosing a side. He instead chooses to point out the flaws in both candidates, calling the election a choice between a “racist dope” and “the devil.” Burr doesn’t know what’s worse, Donald Trump’s blatant stupidity and incompetence or Hillary Clinton’s phoniness and elitism. No matter who you support, with Burr, you laugh at the flaws in your own candidate just as much as the flaws in your opponent.

Burr has made a career out of always pushing the limits of what is acceptable to discuss, and his new special continues to deliver in this department. If you can’t handle some non-mainstream opinions, find the humor in drunk-driving, question why Hitler is the poster child for evil when Stalin had more kills, and enjoy fantasies of genocide, then stay away from this special. But if you are the type of person who does not take anything too seriously and thinks humor can be found everywhere, even in the most unlikely of places, then you should enjoy this provocative work of comedy. If you choose to be offended by Burr, you fall right into his trap and should, as the title suggests, just walk your way out.