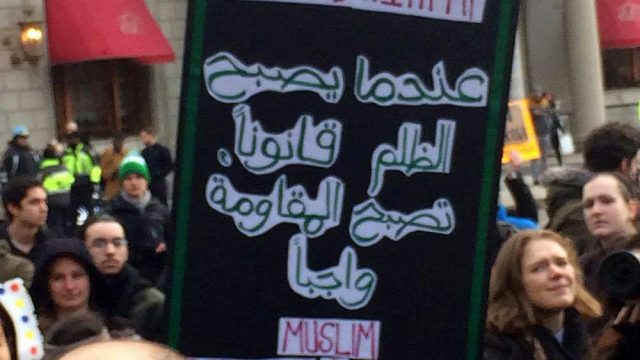 Last Friday, President Donald Trump signed an executive order barring the entry of Syrian refugees indefinitely, suspending all refugee entry for 120 days, and restricting immigration from seven Muslim countries: Iraq, Iran, Syria, Somalia, Sudan, Libya, and Yemen. While the order has sparked praise from some, many have protested the order around the nation. The vague language of the order and various interpretations of its repercussions have resulted in confusion and fear for many. That includes Boston College, where a demonstration has been planned for Friday by members of the Muslim Students Association (MSA).

“Detainment and interrogation and discrimination of Muslims has existed for a while now,” said Isra Hussain, director of external relations within the MSA and MCAS ’17. “But having a policy in place like this makes it very hard for our families, cousins, relatives, friends, to stay in the U.S., and live peacefully in the U.S.”

The MSA’s demonstration, which will start Friday at noon with a moment of silence and then proceed to include student and faculty speakers, will be about standing in solidarity with those affected by the executive order.

“It’s really hard living your everyday life being a normal student when you have this uncertainty hanging over your shoulder,” Hussain said. “We’re hoping for this event to be a place where people reflect and really breathe together and digest everything that’s happened in unity, and move forward from there.”

“We’re just hoping for a place to come together, find that solidarity, and really move forward together to try and get passed this in a very productive way,” Hussain said.

While the speakers have not been finalized yet, Hussain has been in the talks with the Undergraduate Government of BC, the theology department, the LGBTQ community on campus, and the Graduate Students of Color Association to find speakers who will contribute to the message of solidarity and unity. Hussain also emphasized that any student, staff, or faculty member who would like to speak is encouraged to step up during the demonstration.

“We’re hoping to get a theology professor … especially being a Catholic university, to understand where Catholic social teaching, where different faiths come into what’s been going on recently, and how faith might help us move forward,” Hussain said.

Following the demonstration, MSA is inviting everyone to join them for their Friday prayer in the Multi-Faith Center. Hussain hopes that students and faculty will take the opportunity to get to know some more people in the community.

“A lot of it was for ourselves, and I know that’s why I want to do it,” Hussain said. “I wanted a way to project all of this energy I’ve had following the immigration ban into something more productive, and I think a lot of people were feeling that BC should come together in some way.”

Sara Elzeini, an active member in MSA and MCAS ’18, originally came up with the idea of holding a solidarity demonstration. As a first generation American and daughter of Egyptian immigrants, Elzeini felt hurt by the executive order and empathized with those who could no longer visit their loved ones.

“My mom was kind of stuck in Egypt for a whole year last year, and I know that feeling of having a family member removed, in a different country,” said Elzeini. “There are families literally being stripped apart because of this, and just creating more of a divide and prejudice against Muslims.”

Upon being granted the permit to demonstrate by dean of students Thomas Mogan, Elzeini began sending emails to various student groups, receiving only responses of support and excitement.

“It’s honestly been the most supportive time I’ve had at BC so far,” Elzeini said.

Trump’s executive order also applies to permanent residents of the U.S., green-card holders, who were traveling overseas for family or for work. Reince Priebus, the White House chief of staff, however, suggested on NBC’s Meet the Press that the order wouldn’t affect permanent residents going forward, but later appeared to contradict himself in the same interview.

Hussain, as the child of Pakistani immigrants, is fearful that the immigration ban will extend to Pakistan. She fears that her cousins, in the U.S. on student visas, will not be able to return to America if they visit their families.

“It really gives me hope that my peers have some kind of ‘common sense’ in a way, and know that the only way we can move forward from this grief is if we’re together,” Elzeini said. “My main message is unity and strength and being there for each other.”