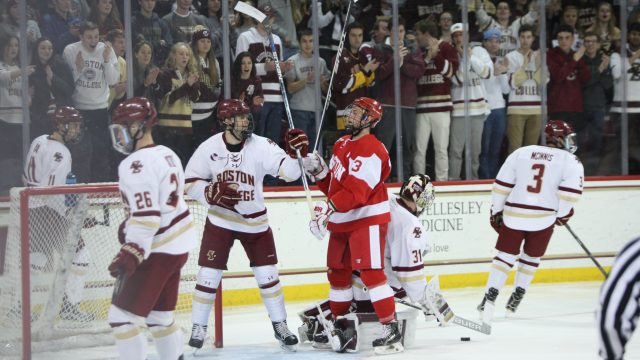 If you walk into TD Garden and look for the Beanpot banner, you will surely notice the attached pennant that reads: Boston College 2016 Tournament Champions. While the Beanpot carries on over the next two weeks, that same banner will hang over the heads of every team that participates in college hockey’s most legendary tournament. For BC men’s hockey, this will bring back the memories of lifting the Beanpot trophy high in the air, and the glory of besting its rivals to become the kings of Boston. But for Boston University, playing under this banner will remind the team of the heartbreaking 1-0 loss in overtime to BC. For one, a chance to defend its crown—for another, an opportunity for redemption.

The No. 8 Eagles (18-9-2, 13-3-1 Hockey East) are set to take on the No. 3 Terriers (18-7-2, 11-4-2) this Monday evening at TD Garden. Since last playing the Terriers, BC has put together an impressive four-game win streak over Hockey East opponents Massachusetts, Connecticut, Notre Dame, and New Hampshire. Over the course of the season, the Eagles have outscored their opponents, 99-69. Their offense comes into the Beanpot hot—BC has scored six goals in each of its previous two games.

BU has been less consistent as of late, victorious in its last two games but losers of back-to-back games against Merrimack the weekend before. The Terriers are led by goaltender Jake Oettinger and freshman Clayton Keller, the No. 7 overall pick in the NHL Draft, who is averaging a little over a point and a half a game in Hockey East play. BU can put the puck in the net, but are built as a defense-first team, as it is top-five in the nation in goals against average. The Terriers do not want to play this game from behind, so it is in the best interest of BC to attack early and often to try to gain an edge and take the lead early in this game.

Last Time They Played: The last time these rivals encountered one another was during two low scoring home-and-home games on Martin Luther King Weekend. The Terriers took the first match, 2-1, at Agganis Arena, and then came to Chestnut Hill and beat BC 3-0. The more recent match at Conte Forum was much closer than the score implies, as BU scored once on the power play in the second period and put an exclamation point on its win by scoring twice more on the power play with under a minute left in the game. The Eagles outshot the Terriers 34-32, but none of their attempts could light the lamp. After these back-to-back losses to their archrival, the Eagles should be out for revenge.

Keys to the Game

Dominate Special Teams: BU scored three power-play goals in its last game against BC, so it will try to capitalize on the man advantage if BC loses a player to a penalty.  The penalty kill has been an Achilles’ heel for the Eagles all year as they rank second-to-last in penalty-kill percentage in Hockey East and average the most penalty minutes a game. Head coach Jerry York’s squad will have to show discipline by staying out of the box, and take advantage of any power play that the Terriers gift it. On the man advantage, puck movement needs to be stressed to open up shooting lanes, and the Eagles should try to take as many shots as possible on the power play. This is a tall task, as BU has the best penalty-kill percentage in the Hockey East, but if anyone can find a way to pot a goal, it’s the powerful BC offense.

Win the Battle Between the Pipes: The Eagles outshot the Terriers a total of 67-65 over the course of both matchups, but BU outscored them 5-1, with the only BC goal coming on a power play of its own. The main reason for this was BU’s phenom freshman netminder, Oettinger. The expected early-round draft pick has been an impenetrable barrier that has kept BC from gaining much momentum in the previous contests. York’s team needs to keep peppering Oettinger with shots and try to pounce on opportunities early. BC leads Hockey East in most goals scored, but BU sits atop the rankings in goals against average, so the BC offense vs. Oettinger will be fun to watch. Joseph Woll has been fantastic for the Eagles, and will need to keep up his strong play again against BU. If BC does not find a way to put the puck in the net early, he may need to stand on his head to ensure that the Eagles can stay in the game.

Own the Moment: Experience could be the deciding factor in this game, and if it is, that bodes well for BC. Although Woll, like Oettinger is a freshman who has never experienced playing in the Beanpot, many of Woll’s surrounding cast has played under these bright lights before, including captain Chris Calnan, Colin White, and the Fitzgerald brothers to name a few. Not only have these players played in the Beanpot before, they have won it—some players even twice—so they’ll know what it will take to raise the Maroon and Gold to the rafters again. Also, the Eagles have the winningest coach in NCAA history standing behind their bench to cap off their seasoned corps. BC cannot be dazzled by the shining lights, coming out flat-footed could give BU the advantage. If the Eagles can continue to compete at the level they have since the Notre Dame win recently, they will be well on their way to yet another Beanpot victory over BU under York.

BU has been playing some good hockey this year, but so have the Eagles. A win here for BC would be huge, not only in competing for the Beanpot, but also to extend its winning streak and boost its ranking. The Terriers are far from unbeatable, and if BC can jump on them early and continue playing at a high level for 60 minutes, it will be in a great position to head on to the Beanpot final. 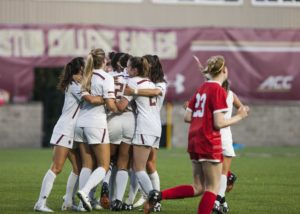