Home » Previewing Women’s Beanpot Championship: What to Expect Against Northeastern 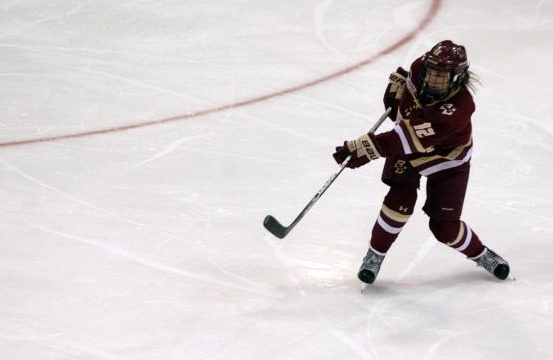 Previewing Women’s Beanpot Championship: What to Expect Against Northeastern

Coming off a frustrating 4-4 tie against the University of Connecticut, Boston College women’s hockey is looking to secure a second consecutive Beanpot victory on Monday. The Eagles fell behind 3-0 in the first period in Friday night’s contest against the Huskies, eventually clawing their way back with a goal in the second period and three in the third. UConn also found the twine a fourth time, and neither team was able to convert in overtime.

This marks the second game in a row that the Eagles (20-3-5, 15-2-3 Hockey East) have channelled their inner Tom Brady, avoiding losses by scoring late in the third period. Against Boston University in the first Beanpot contest last Tuesday, BC netted two to come back from a 2-1 deficit to win the game and move on to Tuesday’s championship game.

The Eagles, although not winning against the Huskies, maintained their unbeaten streak that now sits at 16 games. The defense has been fairly consistent, with UConn being the only team of late to net more than two goals since the beginning of January. Sophomore forward McKenna Newkirk has been on a tear, scoring seven goals in the last five games. Junior defenseman Megan Keller has also been playing well, sitting second on the team in assists and averaging exactly one point per game.

Northeastern has also been playing well, scoring 25 goals in the last six games. Emerging victorious in the late game against Harvard last tuesday, the Huskies (18-9-3, 13-7-2 Hockey East) whipped the Crimson 4-1. Sophomore goaltender Brittany Bugalski has also been playing well, maintaining a .927 save percentage amid games in which opponents have been averaging well north of 30 shots per game.

Last Time They Played: In the last contest between these two heavyweights, the Eagles emerged victorious in a 4-2 win. Scoring 3 goals in the third period, BC received scoring contributions from four different Eagles. The penalty kill was also stellar, seeing seven opportunities and denying the Huskies on all of them. The game winning goal also came while the Eagles were on the penalty kill, while the fourth was tacked on late in the period as a form of insurance. The Eagles also took five penalties, meaning that there was a total of 12 power plays for both teams. BC also did not notch a power play goal.

Good/Plentiful Shots on Goal: Bugalski is a force to be reckoned with in net for the Huskies. The 5-foot-9 sophomore has one of the best save percentages in the conference, has the second most saves, and the second most wins. Her GAA is not necessarily reflective of her play, but rather of her defense’s. This means that it is imperative that the Eagles throw a multitude of good quality shots at the net. Especially on the powerplay, an area in which the Eagles have been steadily improving after a midseason slump, the Huskies have become complacent simply letting Bugalski do the work for them. If BC can create opportunities for open shots in the slot or on cross-ice one-timers, it can score a lot of goals on this team. It has the goal scoring talent in Newkirk, Delaney Belinskas, and senior captain Andie Anastos, it just needs to use it. This team has been scoring a lot of goals, but with a netminder that has made 675 saves (for reference, Katie Burt has made 539 and leads the conference in GAA) the Eagles need to pour in shots to find the twine.

Better Defense and Good Goaltending: Through a significant portion of the season, the Eagles have only been running two defensive pairings. Although they typically dress six in case of injury or late-game fatigue, Keller and Co. have been running the show. Through their stints as 30-plus minute defensemen, the Eagles have allowed a conference-low number of goals. Friday’s game against UConn was a notable exception to this defensive prowess, which saw the Eagles down by three goals until Caitrin Lonergan scored the game tie-er with 1:42 remaining in the third. Bert only faced 26 shots in the contest, saving only 22 in one of her worst performances of the season. Bert and the Eagles defense needs to find their groove again if they are going to limit scoring opportunities against the Huskies, for whom McKenna Brand and Denisa Krizova are conference-leading goal scorers.

Eliminate the Need for Third Period Heroics: Although Boston sports fans are currently reveling in biggest comeback victory in Super Bowl history, the Eagles should not strive to imitate their professional football counterparts. BC has become known for its ability to cut a lead in the third period, but it would be easier to score four goals in the first two and then park the bus in the third. The Eagles have not given up a goal in the third period in their last seven games, meaning that if they can carry a lead they can play an even stauncher defense to limit Northeastern’s ability to score. In seven of the last 10 games, the Eagles have failed to score in the first period. In most leagues, the team that scores the first goal often wins the game. It’s a statistic that shouldn’t matter but does, meaning that getting on the board early is crucially important for the Eagles if they want to hoist the Beanpot trophy.