Home » BC Dining and Student Groups Partner to Compost in Mac 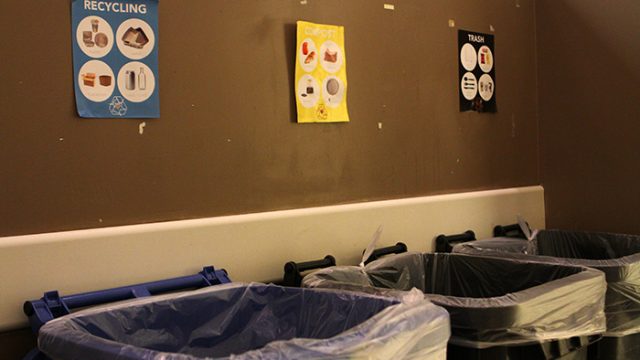 BC Dining and Student Groups Partner to Compost in Mac

Boston College Dining Services will partner with the Undergraduate Government of Boston College’s environmental caucus, EcoPledge of BC, and the Office of Sustainability to begin a composting effort in McElroy Commons after Spring Break.

“The initiative will educate students to self-sort,” said Leora L’Heureux, a dining manager at McElroy.

Students in green shirts will be standing by the trash bins for the first week of the implementation, educating students on which bins to place their trash in. The goal is for students to learn how to sort food waste from recyclables and trash. L’Heureux hopes that by having these students directing the trash disposal, students will become used to the idea of composting.

The Office of Sustainability will supply customized tops with different-shaped holes to go on top of the bins in the trash area. The recycling bin’s hole will be a circle while the composting bin’s will be a square.

“We’re hoping that the puzzle piece [tops] will help with the composting effort because it’s visual,” L’Heureux said.

Carolyn Townsend, the director of environment and sustainability programming in Student Initiatives, a branch of UGBC, believes the tops will encourage students to sort their waste.

“Students will have to think about where they are going to put their waste rather than just throwing their trash in the nearest bin,” she said.

This is not the first time BC Dining has worked with students to try to implement composting in Carney. There have been several efforts over the last few years, but L’Heureux hopes that student representatives monitoring the stations and the new bin tops will help the effort become more successful.

“[The student groups] weren’t prepared,” L’Heureux said. “They didn’t know how much work it entailed. They felt like they weren’t doing enough to get the word out there.”

Townsend attributed the failing of the composting effort to poor signage and the bins not having lids.

“Since the last trial we have regrouped and strategized how to successfully implement our next campaign after spring break,” Townsend said.

Michael Forcier, general manager of McElroy, believes that having the students in green shirts directing students during peak dinner hours will improve the composting effort.

“In order for it to be successful, the students have to show up and be behind that wall,” Forcier said.

If the composting effort goes well, L’Heureux and Forcier will encourage Stuart Dining Hall to implement composting as well.

UGBC BC dining ecopledge compost office of sustainability
Big Sean’s ‘I Decided’ Is a Contemplative Reflection
Unoriginal and Tired, ‘A United Kingdom’ Is Just Another Biopic