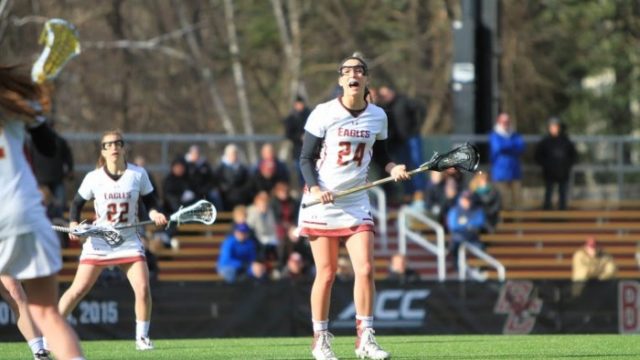 Boston College lacrosse continued its non-conference success on Wednesday afternoon, dominating University of Connecticut in the second half to complete a 14-11 comeback victory.

Sophomore midfielder Sam Apuzzo was once again the catalyst for the Eagles (4-2, 0-2 Atlantic Coast), scoring a game-high five goals on just six shots. She also added two assists, bringing her season total to 14, which leads the country. As if that wasn’t enough, her 33 points this year leads the nation, as well.

Although BC came away with its fourth-straight nonconference win to start the season, UConn (1-2) often looked like the better team in the first half. In their home debut, the Huskies tallied the first two goals of the contest less than a minute after the opening whistle. UConn’s Brooke Jensen fired a strike past Zoe Ochoa for the first score before Maggie Tripodi launched a free-position shot into the net for an early 2-0 advantage.

Then the Eagles’ most popular connection was awakened. Apuzzo found senior attacker Kate Weeks open for her 19th goal of the season, good for second in the country. A couple minutes later, Apuzzo took it herself for the equalizer, knotting the game at 2-2.

When Grace Nolan gave the Huskies a 3-2 lead with a goal in the 10th minute, Apuzzo answered again. She sliced and diced the UConn defense for a pair of goals, assisted by Dempsey Arsenault and Kayla O’Connor, helping BC regain a 4-3 lead. Unfortunately, that’s exactly when the Eagles got too comfortable with their slim lead on the road.

With 10 minutes remaining in the half, the Huskies went on goal-scoring rampage that left BC at risk of entering the break facing a hefty deficit. UConn’s Jacqueline Jordan scored three goals in three minutes and Olivia Miles added a fourth soon after, as the Huskies jumped out to a commanding 7-4 lead.

Apuzzo wouldn’t allow her team to go into halftime trailing by that much, though. With a few minutes remaining, the Apuzzo-Weeks connection resurfaced, with the senior forward recording the assist this time. And in what might be seen as the turning point of the contest, Apuzzo notched her fifth goal of the half with 20 seconds left to cut UConn’s lead to just 7-6.

The one-goal deficit was barely an uphill battle for the Eagles in the final half hour of play. Although Ally Tilley and Tripodi put the Huskies up 9-6 at the beginning of the second half, BC responded with a run that gave the team the lead for good. Over a five-minute stretch, the Eagles poured on five consecutive goals, two each from Weeks and O’Connor, to give them a 11-9 lead. A few minutes later, Mary Kate O’Neill tacked on her sixth goal of the 2017 campaign, allowing BC some breathing room in the final minutes of the game.

The Eagles would need it, too, as UConn tacked on two more goals before the final whistle sounded. But BC emerged with a much-needed 14-11 victory on the road after dropping its first two ACC games to Syracuse and Virginia Tech. For the next four games, the Eagles will have tackle more nonconference opponents such as Harvard and Maryland—but then, the heart of the conference slate awaits. BC will need its supporting cast—like the injured Tess Chandler—to complement Apuzzo and Weeks during ACC play if the team wants to replicate its non-conference success against some of the most talented rosters in the country.

lacrosse uconn Zoe Ochoa Sam Apuzzo kate weeks
A New Era of BC Athletics Calls for a New Era of Eagles Uniforms
To Replace Bates, BC Must Find Perfect Fit in New AD