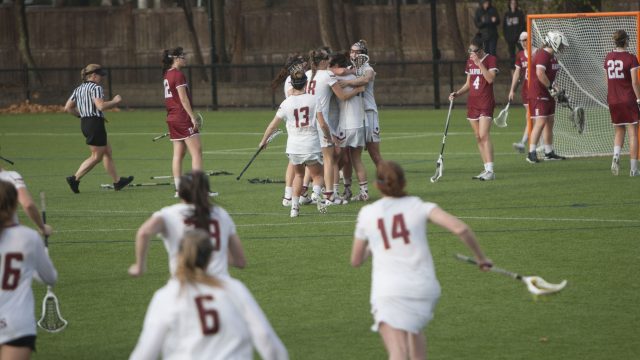 Boston College lacrosse trailed Harvard by three goals with just five minutes left in the game. As the pouring rain intensified, the game seemed to be slipping out of reach. Then the Eagles showed their resilience.

After coming back with so little time left in the second half, the momentum was now completely with the Eagles. Going into overtime, the fans and players alike sensed that the afternoon would belong to BC. Finally, Kaileen Hart sniped an unassisted goal in overtime, bringing the crowd to its feet and sealing a dramatic 13-12 overtime win in a rollercoaster game for the Eagles (5-2).

It was a tough back-and-forth test for BC in this early-season matchup against its nearby rival. The game looked as if it would be a blowout early on, as the Crimson (1-1) took a commanding 4-0 lead early in the first half. In the 13th minute, Weeks got the Eagles going with her first goal of the afternoon, while Sam Apuzzo got the assist. Two subsequent goals by Harvard’s Marina Burke deflated any chance the Eagles had at building momentum, as the Crimson extended their lead to 6-1. Fighting until the final whistle, BC mustered two late first-half goals from Hart and Kayla O’Connor, shifting the game’s momentum, and cutting Harvard’s lead to just 6-3 by halftime.

The Eagles kept momentum on their side at the start of the second half, with another spectacular goal by O’Connor off a lob pass from Mary Kate O’Neil. Harvard finally responded with two goals of their own, though, seemingly squashing the momentum the Eagles built. Now an 8-4 game, the outlook seemed decidedly grim for BC. Showing their persistence yet again, the Eagles fought on. Apuzzo assisted O’Connor to cut the lead to 8-5, and a barrage of BC goals insued. Kate Taylor’s goal, assisted by Laura Frankenfield, cut Harvard’s lead to two, making the score 8-6. Weeks’ 20th-minute goal cut the lead to just one.

But, as the team managed to do throughout the game, Harvard again responded, scoring three goals of its own. Seemingly every time the Eagles made the game close, the Crimson was able to extend their lead, and shut down the comeback. After the two teams exchanged goals from Apuzzo, Taylor, and Harvard’s Keeley MacAfee, making the score 12-9, the stage was set for the Eagles’ late-game heroics.