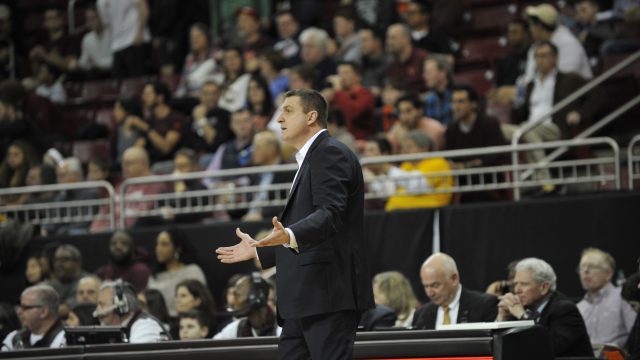 The sports industry has become increasingly numbers-oriented. And for Boston College men’s basketball, this infatuation with quantifying all aspects of a team’s performance reveals what appears to be the smoldering remains of what was once a competitive Division I program.

There’s no way around the inherent ugliness of the results from the recently completely 2016-17 season. Nine total wins. A season-ending, 15-game losing streak. A third-straight season in the cellar of the ACC.

But it’s hard to blame coach Jim Christian for gravitating toward intangibles as an explanation for the program’s upward trajectory.

“There are no miracles out here,” Christian told reporters after the Eagles’ 92-78 loss to Wake Forest on Tuesday at the ACC Tournament. “You have to stay with your process, believe in what you’re doing. I do.”

A tangible argument could technically be made by comparing this season’s results with those generated by Eli Carter’s 2015-16 team. That team only won seven games, ending the season on a 19-game losing streak, and secured a place in infamy by failing to win a single conference game. That team was outscored by an average of 17.0 points in conference play, compared to the 10.7-point margin of defeat posted by this season’s squad. This year’s team shot a slightly below average 44.8 percent from the floor in ACC play, compared to the unfathomably poor 39 percent mark posted by last year’s unit.

But this argument reeks heavily of the sentiment that this year should be considered progress simply because it didn’t fail as spectacularly as last year. It sounds like a kid telling his parents that although he failed his midterm and got a 50, it was a success in comparison to that time he got a 35.

Discarding raw statistics, one sound from Tuesday afternoon’s loss serves as the most convincing argument for this season’s progress. Or to be more specific, the absence of a sound.

Late in the first half of Tuesday’s game, as Ky Bowman crumpled to the floor after tomahawk spiking the shot of Wake’s Bryant Crawford, writhing in pain and clutching at his right knee, a deathly silence shrouded the Barclay’s Center. And as Bowman was helped back to the locker room, unable to put any weight on his injured leg, the entire crowd in attendance watched with baited breath, hoping that BC’s ascendant superstar wasn’t seriously injured.

More than anything, this response marks the progress Christian has been struggling to find words to express. That silence marked a real fear that BC’s future growth would be curtailed. That fans and casual onlookers alike had the ability to project their thoughts about this team into the future is a huge step over last year’s team. And Bowman is the reason.

While Jerome Robinson showcased himself as a high-level ACC player last season, he was just one player tasked with shouldering the burden of an entire program. As Bowman joined him over the course of the season—morphing from a player who averaged 7.8 points per game over his first 11 contests to one who averaged 17.4 points per game and shot 47.2 percent on 3-pointers in games against teams from the nation’s deepest conference—the entire tenor of Christian’s program changed.

With a dynamic tandem, as talented of a backcourt as any in the conference, that would have two more years to grow together, Christian suddenly had a selling point for recruits and administrators who doubted his ability to build at BC.

Bowman’s dynamic athleticism, pick-and-roll prowess, and ability to drain triples off the dribble perfectly complement Robinson’s midrange isolation attacks. He gives BC the ability to run the offense through one playmaker, bending the defense away from the other one playing off the ball and allowing him quick scoring opportunities against a scrambling defense. He gives Christian a second player capable of creating his own shot, shifting burden from Robinson, and serves as a jolt of energy to the team, with his explosive finishes above the rim in transition.

With Bowman in the fold, the Eagles averaged 71.8 points per game in conference play, dropping 82 on both North Carolina and Duke and eviscerating Jim Boeheim’s vaunted 2-3 zone to the tune of 96 points in a victory on New Year’s Day. Whereas last year’s team had an offensive efficiency of 85.5 in conference play, per kenpom.com, this year’s unit had an offensive efficiency of 100.3 in conference play. While still a bit below the national average, this massive improvement indicates that BC’s offense is no longer an eyesore and is capable of scoring points against the very best teams in the nation.

But to make any improvements in their continued poor record and tendency to get blown out, Christian and his team must prioritize growth on the defensive end of the floor. Last season, BC allowed 80 or more points seven times. This season, that number ballooned up to 13. While the increased pace of the team—the Eagles played at the nation’s 42nd ranked pace this season, after ranking 253rd last season—certainly gave opponents extra possessions on which to score, this number is still inexcusable.

The most obvious issue is a glaring lack of size and rim protection. Starting the 6-foot-6 Connar Tava and the 6-foot-9 Mo Jeffers left the Eagles with an interior size advantage most nights. Jeffers led the team with just 0.5 blocks per game and the 6-foot-11 Nik Popovic, the Eagles’ center of the future, blocked a paltry nine shots the entire season, three fewer than Robinson. Per hoop-math.com, BC allowed opponents to shoot 61.6 percent on field goals at the rim, 234th nationally. By comparison, with physical 7-footer Dennis Clifford patrolling the paint last season, the team ranked 167th in the nation in the same category.

Popovic will need to improve his physicality and stamina to effectively defend in the post next season. In addition, he must learn to exercise verticality, leaping straight up to protect the rim, instead of lunging forward at shooters. The Bosnian freshman committed a whopping 7.1 fouls per 40 minutes this season, a mark that only human-foul machine Idy Diallo has topped in Christian’s three years in Chestnut Hill. Since he will enter next season as the team’s projected starting center—unless the team picks up a veteran on the graduate transfer market—improving his ability to stay on the court will be crucial to BC’s team defense.

Aside from rim protection, execution seems to be the biggest issue plaguing the Eagles. In Tuesday’s game, Wake attempted 43 free throws, the most the Eagles have allowed in a game since a contest in Nov. 2014 against UMass—a game where the Minutemen actually attempted more free throws than field goals. Many of the freebies came courtesy of fouls incurred after missed rotations following double teams of the Demon Deacons’ star center, John Collins, in the post. While the Eagles rarely double team the post, in contrast to teams like Virginia or Louisville, this inability to execute the game plan highlights a larger trend over the course of the season.

“When the ownership has to go to the team in the second half on the defensive end of the floor, we’re not doing it,” he admitted. “We don’t have any defensive leadership out there, we don’t have enough communication.”

Christian’s remarks are undoubtedly alarming. But at the same time, they do present an easy avenue for growth. Though his players won’t suddenly turn into the Monstars on the defensive end of the floor simply by executing a system and working off of one another, they can likely prevent a few baskets per game. With the offense’s sustainable improvement, eliminating miscommunications in ball screen coverage and minimizing blown switches could be worth a five win improvement.

While that assumption seems to not be grounded in fact and mostly speculative, the Eagles lost six games this season by six points or fewer—a difference that could be created by two or three possessions. It’s not implausible that a more concerted execution of the team’s defensive scheme could’ve erased some of those deficits. Going forward, in addition to working on Popovic’s ability to protect the rim, the coaching staff must harp on strict adherence to the defensive game plan and stress active communication.

On the whole, though Christian doesn’t have many statistics to point to for his team’s progress, there is definitely a visible upward trend emerging, one that no longer requires the viewer to squint in order to see it. The team might even leave the ACC cellar next season. In addition to the expected development of Bowman, the decline of Pittsburgh should help make this goal a reality for BC in the 2017-18 campaign. The Panthers, whose bench scored zero points in their ACC Tournament loss to UVA last Wednesday night, will lose four of their five starters to graduation, including Michael Young and Jamel Artis, two of the top six scorers in the conference.

After last season’s low point, the rebuild is finally beginning for Christian and his young nucleus. Spurred by the blossoming game of Bowman, the clouds of failure are receding. And with any luck, Christian will have a bevy of tangible arguments to cite his team’s success at this point next year.