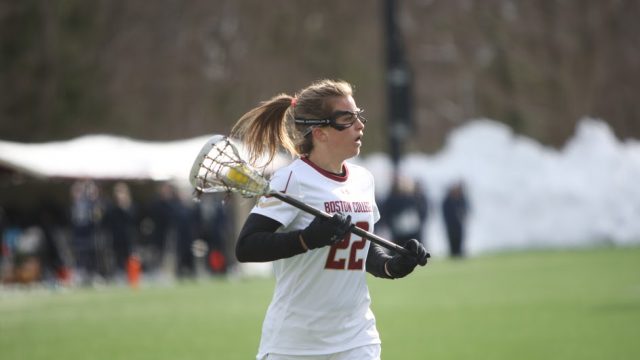 After losing its first two conference games of the season, Boston College lacrosse entered its matchup against the University of Louisville searching for a commanding ACC victory. Thanks to an offensive flurry in the first half, the Eagles found just that, earning a 14-11 win over the No. 15 Cardinals.

Since the beginning of the month, BC (8-3, 1-2 Atlantic Coast) has scored 47 goals over three games. That offensive strength showed itself once again today, as the Eagles dominated over Louisville (8-3, 1-2) for the first 20 minutes of the game and built up an early lead. First to find the back of the net was Kate Weeks, who scored the first goal of the game a little more than one minute into play. Less than 50 seconds later, Sam Apuzzo found Kaileen Hart open. Hart beat Louisville goalie Brittany Read for the second goal of the game, bringing the tally to 2-0 in BC’s favor.

Over the next 14 minutes, the Eagles scored seven more goals, piling onto their lead and dominating play. Apuzzo, Weeks, Elizabeth Miller, and Kayla O’Connor each netted goals during this period—Miller’s goal was her first of the season. After O’Connor’s first goal, Louisville substituted Lexie Ball in for Read. O’Connor then welcomed Ball by scoring two straight on her. Read would check back into the game for the final five minutes of the half.

For much of the first half, BC goalie Zoe Ochoa had relatively little to do. Early in the half, a foul on Christina Walsh gave Louisville a free position shot. Hannah Koloski took the attempt, but Ochoa denied her, recording her first save of the day. From then until the final 10 minutes of play, the Cardinals failed to test Ochoa. But in the last minutes of the half, Louisville fired shot after shot on Ochoa and halved BC’s lead.

With a little over nine minutes to play, Mary Kate O’Neill committed a foul, giving the Cardinals another free position shot. This time, Louisville didn’t waste its opportunity. Meghan Siverson hurled the ball past Ochoa to end the shutout and bring the score to 9-1. Next up, Allison Ferrara found the back of the net, followed by Koloski, cutting BC’s lead to 9-3.

Hart temporarily stopped Louisville’s momentum when she beat Read, newly subbed back in, for her second goal of the game. But Louisville refused to give up. Koloski and Siverson scored another goal apiece in the final minutes of the half, cutting BC’s lead to 10-5 at halftime.

Lauren Daly checked into goal for BC entering the second half, while Read got the nod again for Louisville. Each netminder faced plenty of action throughout the half.

It didn’t take long for the Cardinals to test Daly. Stephanie McNamara fired a shot on Daly, but missed wide left. BC failed to clear the ball out, however, and the Cardinals retained possession. Madison Hoover found Koloski open around the net, and Koloski snuck the ball past Daly for a goal.

BC responded by scoring two-straight goals. Hart won a draw control and took advantage of her possession, connecting with Weeks for the Eagles’ first goal of the second half. Freshman Kate Taylor tested Read next, but couldn’t find the back of the net. But O’Connor succeeded, bringing the tally to 12-6, BC.

From there, it turned into a back-and-forth battle for momentum. Louisville scored three-straight goals to cut BC’s lead to just three, but then the Eagles pulled away again with a couple of goals. With seven minutes to go, BC held onto its 14-9 lead.

But Louisville wouldn’t go down without a fight, making things interesting in the final minutes of play. Jillian Bolog and Koloski each scored, bringing the score to 14-11. The Cardinals managed a couple more shots in the final minutes, but couldn’t convert on any opportunities, giving BC the 14-11 victory. 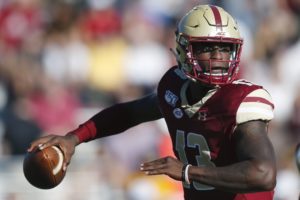