After a Spring Break spent loitering around post-industrial wastelands, considering the importance of concise sentence structure, and unintentionally frightening small children with my vaguely boogeyman-esque face, I made my Boston College return to great fanfare and jubilation among the peoples.

“Are you the one they call Archer?” a young man said to me as I sat wedged behind a table in the secluded back corner of Corcoran Commons, surrounded by other misanthropic recluses, eating my first dinner back on campus.

“I don’t know,” I said, a small piece of orange chicken falling out of my mouth and onto the table. We both ignored this piece of chicken that had clearly fallen from my tongue, onto my lip, and then onto the table in full view of the world, because it would have been weird to openly address it.

“I’ve just received news from ResLife,” this young man said. “You have received a Modular apartment for your senior year. Rejoice and be merry, you glorious columnizer, you.”

And like that, the young man disappeared just as mysteriously as he had arrived, undescribed and unnecessary.

I sat at the small table considering my housing victory. Then I accidentally made eye contact with some girl from one of my classes last semester and didn’t know if I should grimace in recognition or say something or just sit in a stew of my own social failures, so I looked down at my plate of orange chicken and pretended that I hadn’t seen her even though we both had clearly seen each other.

It was a truly classic and relatable scenario.

That was when I realized that I was about to write a column I had never hoped to write, something horrible, worse than the worst writing you’ve ever seen: a relatable column about BC.

Oh God no. I was about to write about BC housing, just like every other schmuck. First I would talk about pick times and blocking groups. I would relay my memories of freshman year housing anxiety, the fear and disappointment of dorm rooms past, and then I would talk about getting a Mod and being a senior and how I go to BC and matter so much and people care what I have to say. I almost puked up my orange chicken just thinking about it. What next? A column about being a Superfan? About how the bus runs slow? About Late Night?

What kind of godawful, relatable, chicken-turd columnist was I becoming?

“Archer, you remind me of a small Mexican chihuahua,” a middle-aged man with slicked-back hair and large hearing aids screamed at me.

“Don’t drink that coffee,” another middle-aged man with a remarkably pleasant mustache said. “There was a fish … in the percolator!”

“Clumsy Twin Peaks references won’t cut it,” I said. “For this one, I have to take serious action if I’m ever going to escape cliché and relatability.”

I leapt up from my table and sprinted out into the cold. Rolling up a small slice of ham, I walked over to the Mods and began to look around. Sticking the rolled-up ham in between my lips and pretending to smoke it, I stopped in front of the Mod that I had just picked. My final home at BC.

Three years of weird crap gone like that, I thought, exhaling ham aroma. My next year would be spent in this uncomfortable red cabin and it would go by even quicker than the ones before it. Then I’d be gone, this Mod would go to someone else, and BC would forget about me and the years I spent penning absurd and uncalled-for columns. And then I’d go out into the world, figure out a way to make money (probably working at a Family Video), grow old, physically fall apart, spend my sunset years hobbling around my house muttering “I used to be a columnist,” and then die. Everything would be over before I had time to do half of the things I hoped to.

But hey, at least I got a freaking Mod to cheer me up.

“Are you pretending to smoke a rolled-up slice of ham?”

I turned and saw Johnny ‘The Bologna King’ Zoozerino, my good friend and confidant, walking toward me.

“Well let me tell you, Johnny ‘The Bologna King’ Zoozerino, that is exactly what I’m doing,” I said. “I got a 4:15 pick time and managed to snatch up this prime piece of real estate right here, but instead of being happy about it, I’m just stupidly depressed about how fast my life is going by.”

Zoozerino nodded. He touched his index finger to his lips, indicating a pensive moment.

So I stood there in the cold, slice of ham between my fingers, and waited for Zoozerino’s wisdom to lift me from my Mod-induced despair.

He pulled out a pack of Samoas and tossed it to me. I quickly removed the wrapping and ate one of the fine cookies.

“Good,” I said, speaking with a mouth full of cookie.

“Yeah, they make good cookies, the Girl Scouts,” he said.

“Still stuck in a pit of despair about the whole ‘I-got-a-Mod-but-then-I-realized-that-life-is-slipping-in-between-my-fingers-and-everything-beautiful-decays-and-now-I’m-not-happy-about-the-Mod thing?’”

“Have another Girl Scout cookie,” he said. “If life’s going by so fast, how about you stop wasting your damn time thinking about it and waste your damn time doing worthwhile crap. Be happy you have a Mod and shut up.”

“That seems to be oversimplifying a b—”

With that, he slowly walked backward until he was out of sight and I was left standing outside my future Mod with a pack of Girl Scout cookies and a saliva-soaked slice of ham. After a second, I walked up to the front door, knocked, and stepped back as it swung open.

“I’m going to be living here next year,” I said to the confused woman standing in front of me. 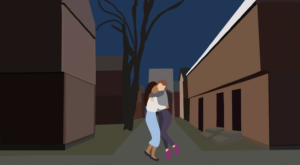