Sex is like pizza, and it’s our responsibility to negotiate the toppings, according to New York Times bestselling author Peggy Orenstein. The “pizza metaphor” describes a mutually beneficial sexual encounter that Orenstein wants couples to have.

Orenstein spoke to students on Monday night about the need for conversation around sexual culture. She opened her presentation by discussing the inspiration for her new book, Girls and Sex.

“Obviously, for young people to understand the ground rules for consent is absolutely crucial,” she said. “But at the same time, I felt like that was where the conversation about sex was ending. We weren’t talking about what was happening after ‘yes.’”

This theme of “after the yes” was what drove the rest of Orenstein’s talk as she hit the highlights of her new book.

She started her analysis of the sexual culture among young girls with some hot topic issues—namely Kim Kardashian and the controversiality of her feminism (or lack thereof). Orenstein presented a two-sided explanation for some of Kardashian’s most provocative photos.

“Kim has made a patriarchal bargain,” Orenstein said. “This is the decision to accept the gender rules that typically disadvantage women, in exchange for whatever power you can extract from the system. So it benefits an individual, but it leaves the system intact.”

Orenstein also discussed the extensive research she has done with young women. A conversation arose with one girl who felt “liberated” by dressing in what many would view as a provocative way. Orenstein called on the audience to ask important questions about their perceptions on this topic.

“You have to ask, ‘Who gets to be proud of which body?” she said. “‘And under what circumstances? And who decides? And how liberating is that really when the fear of humiliation lurks right around the corner?’”

Questions like this led Orenstein to one of her main points, which was that conversations need to take place with young women about sex, sexual culture, and the lies media and power structures sell them about self-objectification.

“It’s not that I think the hookup culture should go away, but what I challenge you to think about is how it can be conducted with benevolence.”

Sara McClelland from the University of Michigan coined “intimate justice,” a term Orenstein said is one of the most important terms in framing these issues. It communicates the political ramifications of sex as well as the personal ones.

Her take on the hookup culture was centered on the “perception-reality gap” or “pluralistic ignorance” so many young people face. She said that 75 percent of young men and women believed their classmates were only interested in a hookup, but 75 percent said they would actually prefer to go on a date.

“It’s not that I think the hookup culture should go away, but what I challenge you to think about is how it can be conducted with benevolence,” she said.

Orenstein also spoke about consent, and she discussed the “baseball metaphor” that accompanies sex she feels needs to be replaced.

“Girls are not even the losing team when using the baseball metaphor, they are actually the field on which the game is played,” she said.

To eliminate the idea that there would be a “losing” side in sex, Orenstein instead suggested the pizza metaphor that is better for both sides in a consensual encounter. She said sex is like pizza.

“If you decide you want to go out for pizza, you negotiate the toppings,” she said. “Maybe I want mushrooms and you want pepperoni, so we go halfsies … Or maybe if you keep insisting on pepperoni, and I am kosher, I am not going to go out to pizza with you anymore. It’s all about the shared experience,” she explained.

She ended her talk calling on girls to take action into their own hands and demand change.

“Girls tend to go along to get along … If you don’t express which toppings you want, you’re going to end up with green pepper—and nobody wants green pepper,” she said.

In a personal case with her own daughter, she said she realized talking about contraception, disease protection, or consent was simply not enough.

“We have raised a generation of girls to have a voice and to expect egalitarian treatment in the home, in the classroom, and in the workplace,” she said. “Now, it’s time to demand intimate justice in your personal lives as well.” 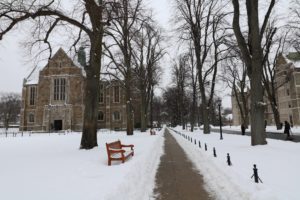