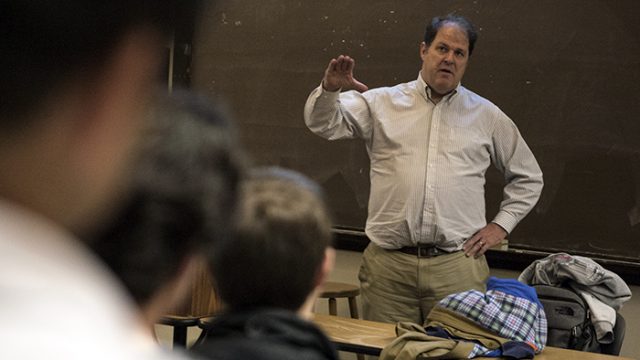 In a way, Gus Bickford, chair of the Massachusetts Democratic Party, is happy about the 2016 election. He spoke in Gasson Hall on Wednesday night in an event hosted by the College Democrats of Boston College as part of their “Politics Outside of the BC Bubble” series.

Bickford, a Brown University graduate who has worked on the presidential campaigns of John Kerry, Barack Obama, and Hillary Clinton, became chair of the Massachusetts Democratic Party this fall, though his career in politics has been both extensive and unexpected.

After bussing tables for a few months, Bickford’s father put him in touch with a candidate for city council in a Massachusetts town. Although his focus in college was mostly on computer science, Bickford agreed to manage the campaign and fell in love with politics.

“I sat in that chair and had absolutely no idea what I wanted to do with my life, and it worked out,” he said.

Bickford has worked on a variety of campaigns from local to national levels. Eventually he was able to merge his computer knowledge with his political career during the recount in the 2000 Bush-Gore election.

Bickford rebuilt the entire voter file in Florida in order to accurately re-tally votes and later advocated for the construction of a national voter file. His efforts resulted in Votebuilder, a program that he helped design, which has been used by both the Clinton and Obama campaigns.

In addition to building the database for the national voter file, Bickford worked specifically on Senator Elizabeth Warren’s 2012 campaign as a vote targeter. In his opinion, the best candidate is the one who can most connect with the voters.

A majority of Bickford’s talk focused not on his political career, but rather on the 2016 presidential election and the resulting improvements needed within the Democratic Party.

“I really wouldn’t want to be in any other place,” Bickford said. “[The presidential election] has given me a reason to watch the news, a reason to resist, a reason to fight back, a reason to keep doing what I love to do, which is spread the fairness doctrine.”

Bickford is a harsh critic of President Donald Trump and believes that Trump will not remain in office long enough to run in the 2020 election. Likening the Trump administration’s connections to Russia to the Watergate scandal, Bickford expressed his hope that there will be a strong investigation conducted by the Senate.

Having previously worked with several members of the Clinton team, Bickford recognized its overreliance on a minority turnout at the poles that ultimately did not deliver in favor of the Democrats.

The narrow margin of the campaign confused Democratic efforts late in the game, but the overall strategy used proved much more effective for Obama than Clinton.

“Women do not fall in line behind a female candidate,” he said. “You can’t rely on women’s vote so you have to find some other way to put it together … it is always amazing to me how tough women can be on each other.”

Bickford cited two further concerns he had about the overall results of the election: losing Michigan and underplaying the animosity against Clinton.

He explained that, based on the issues and especially recent efforts to clean the water in Flint, the Democrats should have easily won Michigan. Bickford also said that, although the Democrats knew there was some resistance to Clinton’s record, the scale of that anger was not fully realized until after the election.

Bickford rebuffed the claim that the Republican Party used big data more effectively than the Democrats.

“In the end, I think their strengths were more the snippets of media that they had,” Bickford said. “There was no substance to their message but it was a message people ate up.”

In spite of the faults made clear by the past election cycle, Bickford still has immense hope for the Democratic Party going forward.

He said the strengths of the Democratic Party lie in its economic policies. Balanced budgets, low unemployment, and not adding to the national debt were all mentioned as hallmarks of Democratic policy.

Bickford also used his years of experience to predict the major issues for both the 2018 and 2020 elections—health care reform, environmental policy, and, at the state level, improvements in public transportation.

Overall, in light of technological breakthroughs and changing social attitudes, the political veteran has hope for positive change in the coming years. Bickford said he believes that transparency will change everything and resistance is making a difference.

“[The women’s march] was the most impressive thing I’ve seen in my lifetime,” he said.

What is most important to Bickford, however, is the next generation of voters and elected officials.
“We have a history in Massachusetts of college kids running for city or state council and winning,” he said. “So, who’s it going to be next?”