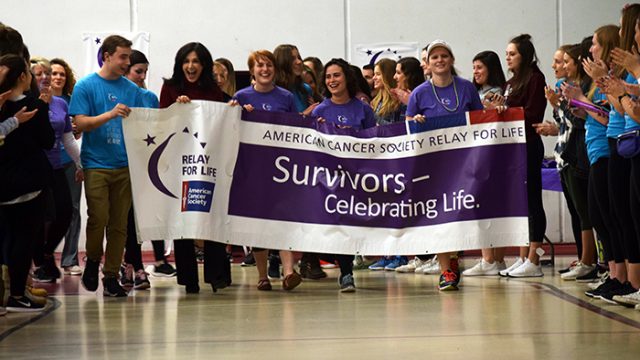 Students stood by their blankets and pillows, cheering and clapping for the cancer survivors making their way around the makeshift track in the Flynn Recreation Complex. Some students were brought to tears as caregivers joined for the next lap. Then, hundreds of students joined in taking a few laps to begin their 12-hour long journey at the ninth-annual Boston College Relay for Life.

“As people get here, they’re energized, they’re pumped, but throughout the night they start getting tired, like a cancer patient would with chemotherapy,” said Melissa Oliver, a Relay for Life committee member and SSW ’17.

Oliver said that as the night goes on, each team tries to stay up with someone walking the track, as a caregiver would with a cancer patient. Then, the much-awaited morning symbolizes the sun rising up for a new day.

Throughout the year, teams and individuals raise money for the American Cancer Society and end with this event. Donations, however, are accepted until the end of August, when the planning period for the next year’s Relay starts. This year, the top team fundraiser was Sigma Phi Epsilon, which raised $9,823, and the top individual fundraiser was Rachel Serko, MCAS ’17, who raised $6,825.

According to Audrey Fleming, one of the four co-presidents of BC Relay for Life and CSOM ’17, BC’s Relay planning committee is made up of eight different subcommittees with a total of about  95 people. At the event alone, about $6,500 was raised.

At this year’s opening ceremony for Relay, Joyce Kulhawik, an arts and entertainment anchor for a Boston-based CBS affiliate, spoke as a three-time cancer survivor.

“I shouldn’t really even be here. I am here because I am a three-time cancer survivor,” Kulhawik said.

Kulhawik first discovered that she had cancer one week before her wedding, when she decided to get a mole on her leg checked out.

“[I told the doctor] I wanted a biopsy. I knew that word,” she began.

The biopsy results showed that it was malignant melanoma, the most dangerous form of skin cancer. Upon consulting a specialist for a second opinion, she had an immediate surgery to remove the tumor, and was told she would be fine to walk down the aisle for her wedding. Before her honeymoon in Barcelona, her husband was given a staple remover. Kulhawik’s honeymoon included the newlyweds removing 17 stitches from her leg.

“Nobody is a statistic,” she said. “I fell out of the statistical norm every single time, and I am still here.”

Her journey of survival set the tone for the rest of the night.

The next 11 hours were filled with food, games, performances, contests, and more. The BC Band, Common Tones, Full Swing, and BC Irish Dance were among groups that came to encourage and entertain the participants throughout the night.

“The Luminaria Ceremony is a time for us to reflect on how the disease has touched each of us personally, and it’s a time for us to look inside ourselves with quiet reflection and find hope,” Fleming said in an email. “Luminaria bags are decorated with the name of someone who has lost their life to cancer or in honor of a survivor.”

relay for life bc relay for life
BC Pulls Away From Virginia for Second ACC Win
In Doubleheader, Eagles Walk Off Against Syracuse Twice 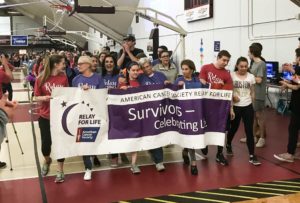