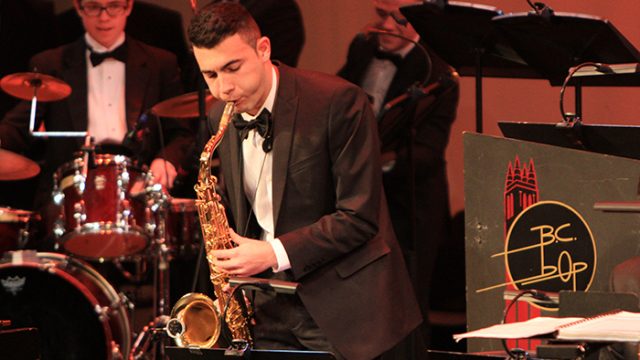 It didn’t take long for the bright and entertaining jazz ensemble, BC bOp!, to engage the audience in its latest show, bOp! Noir, dedicated to its former vocal director, JoJo David. Presented by Boston College Bands at Robsham Theater on Saturday, the group showcased a hearty mix of traditional jazz pieces and inspired song covers that created a fabulous show for the audience to enjoy. The perpetually tapping feet and undying enthusiasm of the crowd demonstrated the power of jazz music to captivate and brighten the lives of those who listen.

The show opened with “Chu Cho,” a whimsical, easygoing piece that set the tone for the rest of the night’s sassy jazz tunes. “Don’t Sit Under the Apple Tree” featured lighthearted drums and the breezy vocals of Nicole Trone, CSOM ’20, and others to convey a playful warning to the song’s addressee not to do anything of note with anyone except their love. In another register, “I Could Write a Book” utilized simple, romantic lyrics about moving a friendship out of the friend zone, and included the vocal talents of Ryan Silva, MCAS ’17, and Monte Samuelian, MCAS ’20, that played off the full-bodied band accompaniment. The end result was a performance that enveloped the audience in a dreamy, charming sentiment.

The band presented one of the most touching aspects of the night with its tribute to David, who tragically passed away last October. His influence on BC bOp! and the greater campus community was felt by the audience as current and alumni vocalists sang of the precious and fleeting nature of life. As the gradually built, sustained notes from the band filtered into the song amidst a melancholy piano melody, the music gripped the audience with the strength of the collaborative performance. Through the powerful, deliberate notes that were situated within the open spaces in the song, the tribute developed an intensity that stirred the audience. When the song finished, the whole theater was silent for a moment as the audience absorbed the beautiful display in memory of David, and the tribute’s request for everyone to live in the moment.

Taking a slower tempo and conveying an energetic, melancholy sentiment, “I Left My Heart in San Francisco” featured fluttery embellishments and a prominent, fun bass section by John Kiefer, MCAS ’19. The song also showcased a twinkling, bright piano by Andrew Tort, CSOM ’18, which together with the rest of the instrumentation, demonstrated yet another facet of bOp!’s talents. In an even slower tempo song, “Jada” gave the audience a mellow performance that highlighted the energy of Christian Wilson, MCAS ’18, on vibes. Through the wondrous, ringing sound of the instrument, Wilson was able to feature a persistent and meandering section that mesmerized the audience with notes that pushed forward and climbed in intensity. Paired with the piano talents of Taylor Nardone, MCAS ’20, the song was a pleasant contrast to the more roaring pieces of the night.

A major crowd pleaser, bOp!’s cover of “You’ve Got a Friend in Me” drew upon the cheerful nostalgia of the song and presented it in a playful incarnation through the musical conversation between Brad Bitzer, MCAS ’17, and Matt Passanante, MCAS ’17, on alto and tenor sax, respectively.

The concert also contained a number of nuanced and flashy performances that delivered an energy in which the audience got lost. “Count Bubba” featured a swimming brass sound that captured listeners as they attended to the scope of musical variation. The mysterious and energetic quality of the song was enhanced by the section that isolated first the saxophones, then the trombones, then the trumpets. This was a unique instance where listeners could hear the individual contributions of each of these instruments, and the culmination of this progression into a bright, blaring melody gave the piece a memorable quality. Another fun piece, “The Rotten Kid,” featured short, crisp notes among snazzy ones to create an amusing number. Showcasing Jimmy Croft, MCAS ’18, on tenor sax, Arthur Diep-Nguyen, MCAS ’18, on trombone, and Marie Peduto, MCAS ’18, on alto sax, the song was a delightful presentation of artfully sprawling melody.

The show also presented some glorious solo performances from its talented vocalists. Greta Ritzenthaler, MCAS ’17, stunned the audience with her rendition of “Turtle Blues,” which featured her fierce, confident vocals over lyrics about hiding underneath a turtle shell. Ritzenthaler carried off her attitude-filled persona with ease, and the range of sultry and soaring vocals throughout the performance captured the spirit of the song effortlessly. Another powerful vocalist, Adriana Castaños, MCAS ’17, dazzled the audience with her performance of  Alessia Cara’s “Here,” which utilized her sultry, incredulous attitude. Castaños’ vocals took the song’s ominous lyrics and elevated them to create a sense that the singer was fed up with the shenanigans the song described. Castaños finished the song with some serious high notes, which served as the cherry on top of a fabulous performance.

Amber Glavine, MCAS ’17, covered “Such Great Heights,” which was transformed by Glavine’s bright vocals and the song’s upbeat reimagining. The subtle power of Tim Skerry, MCAS ’19, on bari sax and Glavine’s sassy presentation led the whole audience to clap along to the song, and showcased the interactive influence of jazz music. Near the close of the show, Michael Mastellone, CSOM ’18, floored the audience with his cover of Frank Sinatra’s “New York, New York.” The performance featured Mastellone’s crisp vocals that projected his enthusiasm through the whole theater, and instilled a sense of heart amid the warm brass music. After a dramatic pause in the song, he finished with an endless, soaring note that won over the audience and transported them to the splendor of the city that never sleeps.

The abundance of energy of all of bOp!’s musicians was infectious, and the audience reveled in the artistically varied and polished spectacle of jazz music. Through performances that featured vivacious and vibrant talent, the audience could see that jazz isn’t merely a style of music. It’s a spirited medium through which to communicate a worldview centered around finding the joy among the ups and downs of life as a whole.