Home » In Wake of HB2.0, NCAA Should Keep Boycott of North Carolina 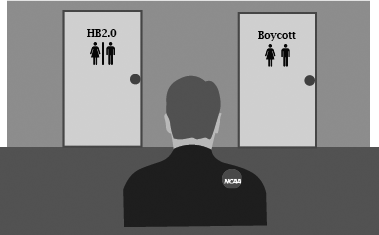 In Wake of HB2.0, NCAA Should Keep Boycott of North Carolina

Last week, on the first anniversary of North Carolina’s HB2 law, the controversial “bathroom bill” that eliminated legal protections for the state’s LGBTQ+ community, the NCAA issued an ultimatum: Repeal the legislation or lose championship events until 2022.

North Carolina had weathered a storm of criticism and protests up to that point. Musicians like Bruce Springsteen, Ringo Starr, and Nick Jonas cancelled performances in the state. PayPal put the brakes on business expansion in Charlotte that would have brought 400 jobs to the area. The NBA moved the 2017 All-Star Game to New Orleans from Charlotte, the NCAA pulled its postseason tournaments from the state, and the ACC followed suit soon after. In total, North Carolina lost about $250 million, but it wasn’t enough to force a repeal of HB2.

Until the NCAA’s most recent threat, that is. Lawmakers came together on Thursday to repeal the bathroom bill and replace it with HB142, a so-called compromise that leaves the NCAA in a tricky situation. On one hand, the new bill exempts schools from state bathroom regulations, like the one in HB2 that prevented from transgender people from using public restrooms corresponding with their gender identity. On the other hand, it prohibits local government entities from passing nondiscrimination laws until 2020.

NCAA President Mark Emmert told reporters at the Final Four that he, along with the board of presidents, will decide this week whether the new bill warrants a return of championship events to North Carolina. ACC president John Swofford also said he would review the league policy in response to the new legislation.

Yes, the NCAA deserves praise for using institutional pressure to achieve political change. But HB142, dubbed by critics as HB2.0, does not constitute political progress. Now, it’s flat-out illegal for cities to protect any LGBTQ+ rights with nondiscrimination ordinances. What’s worse, state and local government agencies can’t create transgender-friendly bathrooms and locker rooms policies because they won’t be permitted to regulate them. The NAACP called the law “an insult to civil rights.” The ACLU called it “more insidious in its targeting of LGBTQ people.”

If the NCAA is serious about equal rights for the LGBTQ+ community, it won’t back down from its boycott against North Carolina. The idea of the NCAA as a moral authority does seem puzzling (don’t get me started on amateurism…). But, boy, does the organization have power.

Not only did the NCAA’s boycott affect North Carolina’s economy, but it also damaged the chances of its beloved teams in March Madness. No. 2 Duke was scheduled to play its  second-round game against No. 7 South Carolina in Greensboro, N.C., but HB2 threw a wrench in those plans. Instead, the matchup was moved to South Carolina, less than 100 miles away from the Gamecocks’ campus. With the arena packed full of South Carolina and UNC fans, who had watched their team play earlier that day and were rooting against their in-state rivals, the Blue Devils suffered a season-ending upset in a hostile environment.

With the repeal of HB2, North Carolina wants to pave the way for a future free of these types of interventions. The state submitted 133 bids for NCAA events between 2018 and 2022, worth a combined $250 million to the state economy. And a study by the Associated Press revealed North Carolina would lose at least $3.76 billion over a dozen years if HB2 remained in effect.

If North Carolina can escape these sanctions with HB2.0, Boston College should take action on its own by refraining from playing road games in the state next year. The University’s Jesuit values of inclusion fall right in line with a boycott against discriminatory practices.

At first glance, HB142 may seem like a step in the right direction. But that, precisely, is what makes it so dangerous. The movement against LGBTQ+ discrimination in North Carolina is now at risk of losing steam after building national momentum in the wake of HB2’s passage. If the perception of this new “compromise” is that the state is making progress, then the protests will stop. Business boycotts will fade and entertainers will return to stages while discrimination will persist in North Carolina.

Now, Emmert and the NCAA have more power than ever. Protesting in the sphere of higher education is the only way to truly reach the entire state. They can shatter this flawed perception of HB142 and force lawmakers to address the bathroom issue without throwing LGBTQ+ rights under the bus. If they take a stand, others might follow. A campaign against hate, over a year in the making, might succeed.

Discrimination has consequences. HB2.0 doesn’t just leave room for more discrimination against LGBTQ+ individuals, it explicitly outlaws efforts to fight against it. The decision for the NCAA should be simple: Maintain the boycott until the state addresses the problem with a meaningful, inclusive bill—not some fool’s gold piece of legislation that further embeds a marginalized population in a legal web of prejudice.