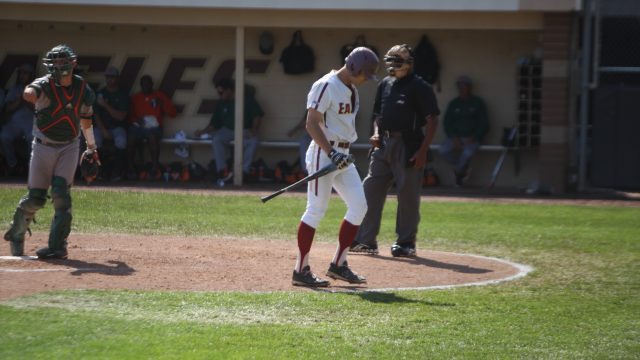 For the first time all season, the Birdcage was rocking—really rocking.

Although officially reported at 652, the Boston College baseball faithful numbered around 1,500, many of whom were students hanging off the roof of Shea Field on the most beautiful day of the young summer season. This series was the one every Eagles fan was waiting for: BC’s reunion with the University of Miami. The Hurricanes took down BC in the Super Regionals last season in a best-of-three series. That series was most notable for its final game, when Miami infielder Edgar Michelangeli hit a grand slam off BC’s Jesse Adams. Michelangeli’s exuberant bat flip and showboating did not sit well with former Eagles catcher Nick Sciortino, and the benches cleared in an ugly brawl.

Friday was the day that everyone circled. Finally, the Eagles—and their fans—could get their revenge. But Miami head coach Jim Morris didn’t put the struggling Michelangeli in the lineup. Instead, the Eagles have a new man to despise: left-handed pitcher Jeb Bargfeldt.

Bargfeldt stifled the Eagles for eight innings and gave up only two hits in a 3-0 Miami victory at home. The JuCo transfer mixed and matched his fastball with a strong spin rate and great life that moved in all directions in the strike zone. Many of the hitters for BC (16-23, 6-16 Atlantic Coast) popped up balls on the lip of the infield grass or in short left-center field. According to head coach Mike Gambino, the strategy was to attack the Miami (21-21, 11-10) lefty down on balls instead of up on them. Unfortunately for his Eagles, that was easier said than done.

“He throws a belt-high fastball, and you’re like ‘How did he get that ball popped up?’” Gambino said after the game. “That’s what Bargfeldt did. … “When you get carved, it feels like you’re flat. But it’s not, it’s just a great outing.”

The Eagles rarely threatened Bargfeldt throughout his shutout performance. In the second, catcher Gian Martellini and left fielder Jake Alu both reached base, via a single and walk, respectively. Both were caught stealing at second base, helping Bargfeldt go two above the minimum in his outing. It was only until Frankie Bartow came in for his 10th save of the year that the Eagles put the pressure on Miami. Freshman Brian Dempsey led off the inning with a single and advanced on an error by third baseman Michael Perez. Yet the Eagles couldn’t cash in. The top of the BC lineup—Donovan Casey, Jake Palomaki, and Michael Strem—went down in order. Those three combined to go 0-for-11, with only a walk by Strem.

BC’s own Friday night starter, Jacob Stevens, pitched well in his own right, though labored and often got behind batters. In only 6 1/3 innings, Stevens threw 110 pitches, often getting behind batters. He enjoyed control of his fastball, and his sinker was working well—Friday’s home plate umpire, Greg Street, gave Stevens full domain over the lower outside corner. Against Hunter Tackett, however, Stevens changed up his strategy—and it didn’t pay off.

Stevens lofted a first-pitch curveball over the heart of the inner half of the plate. Tackett let it fly deep down the left-field line for the game’s opening run. It was the first extra-base hit of the season for the Miami DH, and it was a pitch Stevens wanted back.

“I was throwing a lot of fastballs at the time, I just wanted to throw him something different and he was sitting on it,” Stevens said.

Defensively, the Eagles were sharp as ever, particularly Martellini. The Hurricanes were sloppy on the basepaths—twice, Martellini caught runners stealing, and two Miami runners were picked off. Martellini also made several strong plays at the plate, including one tag to save a run on a throw by Mitch Bigras.

“They were aggressive on the basepaths, and I was just trying to see that opportunity and make a play,” Martellini said.

Gambino had more praise for his catcher, who he believes has been “one of the stories of the year.”

“If you saw Gian play in Oklahoma, you would’ve left saying ‘That kid’s not an ACC catcher,’” Gambino said. “Now, he’s turning into the prospect we all certainly believed he was.”

Yet the pressure is still on for the Eagles. And now, with two games remaining in the series, they’ve got another reason to hate Miami.