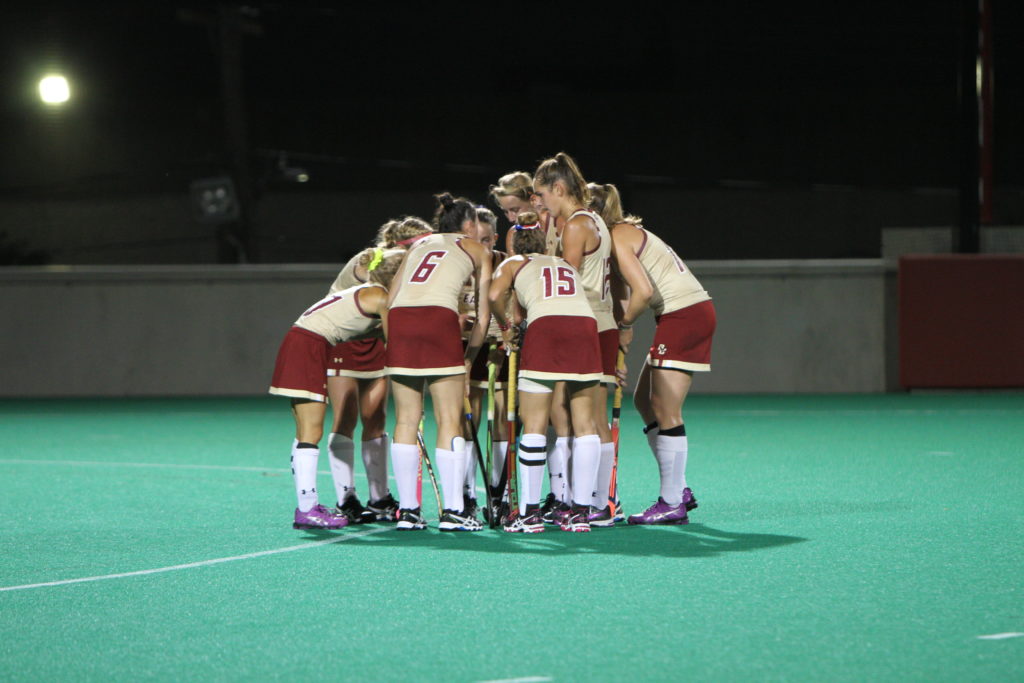 BC Upsets No. 6 Maryland to Complete ACC/Big Ten Cup Sweep

Before this year, Boston College field hockey had only won one ACC/Big Ten Cup game over the tournament’s three-year existence. The Eagles matched that mark with a double-overtime victory over No. 14 Northwestern on Friday. But on Sunday, they reached uncharted territory. BC upset No. 6 Maryland 2-1, completing its first ACC/Big Ten Cup sweep in program history.

It only took eight and a half minutes for the Eagles to get on the board. After intercepting a Terps’ pass inside their territory, BC instantly pushed the ball up the field. Two passes later, freshman Caroline McGovern wound up with the ball in scoring position. She cut inside the circle and veered right. Sliding, McGovern fired a left-handed shot to the back of the cage. It was the Eagles’ first shot and goal of the game.

Neither team scored for the remainder of the half. But just eight minutes into the second period, fellow freshman Fusine Govaert added to the BC lead. Brigid Wood danced around the outside of the circle for a few seconds. Then, when enough space opened up, she flung the ball toward the goal. Govaert redirected it through the legs of a Maryland defender and past Terps goaltender Sarah Holliday to give the Eagles’ a two-goal advantage, as well as a bit of breathing room.

But Maryland didn’t give in. And from that point forward, the Terps took over. Maryland outshot BC 11-3 in the second half, applying constant pressure on the offensive end of the field. The Terps finally scored in the 52nd minute off of a penalty corner. Bodil Keus went top-right on Eagles goalie Sarah Dwyer. Melissa Wilken and Madison Maguire were credited with assists on the play.

Still, BC was up one.

With only four and a half minutes left to play, Maryland called a timeout. Head coach Missy Meharg pulled Holliday and inserted another field player to increase her team’s chances of forcing overtime. Despite being outnumbered, Dwyer and Co. held out for the win—just the second victory over Maryland in program history.

Heading into conference play, BC is 3-0 against top-25 opponents and, for the first time under head coach Kelly Doton, 4-0 overall.