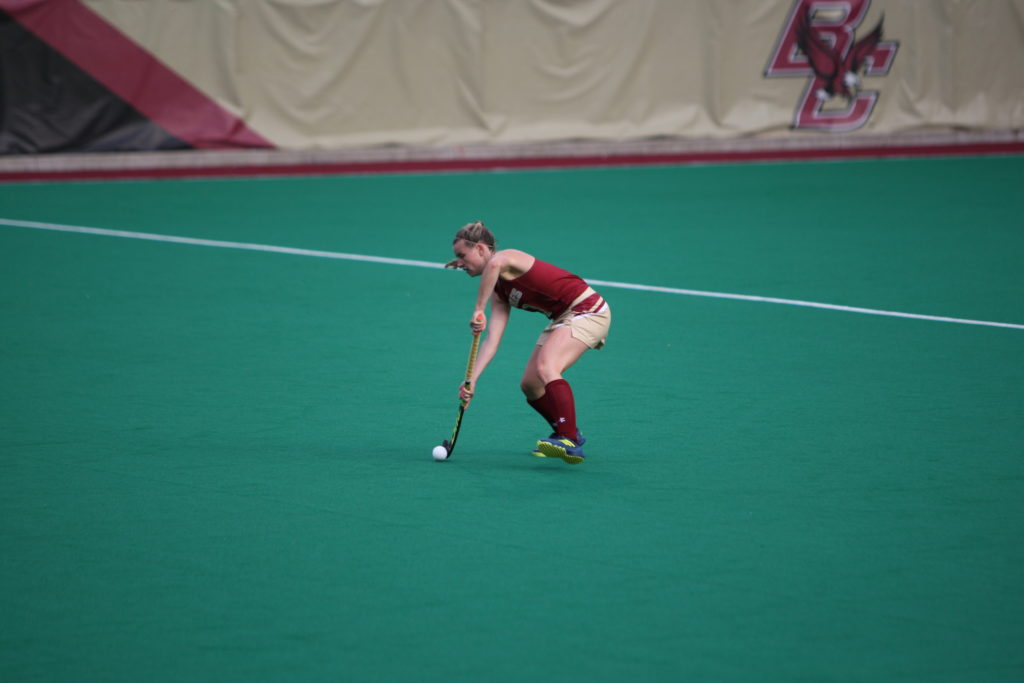 Coming off a difficult overtime loss to No. 7 North Carolina on Saturday, Boston College field hockey looked to bounce back against William and Mary. Both teams came into the game with records of 5-2, with the Eagles, still winless in ACC play, attempting to gain momentum before their upcoming matchup with Virginia.

The game was dominated by BC. The Eagles controlled the ball for most of the game and, shot after shot, bombarded the Tribe in a 3-0 victory in Williamsburg.

No. 10 BC (6-2, 0-2 Atlantic Coast) outshot No. 18 William and Mary (5-3) by a 24-8 margin, maintaining an aggressive offensive style throughout the game and pushing forward for all 70 minutes. A fantastic performance by Tribe goalkeeper Morgan Connor kept her team in the game until the very end. Connor finished with 14 saves—a career high—but the performance was not enough to overcome the Eagles offense.

Early on, it was fairly close in terms of shots. Both teams were trading punches, but not one could break through. About halfway through the first period, though, the Eagles figured things out and took over offensively. At one point, BC fired nine-consecutive shots on goal, but simply couldn’t find the back of the net until, with about 11 minutes left to play in the period, freshman Fusine Govaert finally rolled one past Morgan. Govaert’s second goal of the season ended up being enough to vanquish the Tribe, but the offense did not stop there.

The beginning of the second half mirrored that of the first, with William and Mary and BC playing a tight game, where it wasn’t able to be seen who was going to come out on top. The Eagles were up one, but that wasn’t enough for head coach Kelly Doton and Co.

BC finally started clicking again with about 10 minutes left to play in the game, when it fired off five shots in a four-minute span, the last one finding the back of the net courtesy of senior forward Brooke Matherson—her second goal of the season. The original shot by Matherson was saved by Connor, but unluckily for the Tribe, it bounced back out to the experienced attacker, who managed to double the Eagles’ lead.

From that point forward, BC amped up its attack even more and really put the pedal to the metal.

Shortly after Matherson’s goal, a beautiful pass by junior midfielder Lucy Lytle put Jaime Natale in a one-on-one with the goalkeeper. Natale converted perfectly, effectively closing out the game. This brought Natale’s goal total for the season to four, which leads the team.

In the final minute, William and Mary forward Cammie Lloyd rocketed a ball off of the post, but couldn’t convert. Eagles goalie Sarah Dwyer finished the game with four saves and secured her second shutout of the year. Overall, it was a clean game, with neither team committing a foul or being caught offsides once.

BC, now 6-2, looks ahead to a much anticipated matchup with conference rival Virginia in Charlottesville on Sept. 22. This win will certainly serve as a good momentum builder for the Eagles, who are still searching for their first ACC victory of 2017.