The plot of mother! follows a young woman whose tranquil life with her husband at their country home is disrupted by the arrival of a mysterious couple.

That’s the official description of a movie that has been screaming secrecy and mystery from the moment it was announced. This movie is best enjoyed without knowing anything about it. Do not read spoilers, do not watch interviews, do not even look up the characters names. Ignore the mixed reviews and the disappointing box office and go watch this movie for the truly unique experience it will give you.

Directed by Darren Aronofsky (Requiem for a Dream, Black Swan), this movie is unlike anything he (or anyone) has done before. The advertising campaign has been marketing it as a horror film, but that was only to get people prepared for the horror of mother! The film is a psychological thriller that will leave the audience, positively or negatively, thinking and talking for days. It is a truly unnerving experience, especially the last 30 or so minutes. Aronofsky throws his main character and the audience through a whirlwind of events and emotions that will leave everyone shaking in their seats.

Love it or hate it, this film is incredibly ambitious and artistic. It fits complex and grandiose ideas in the scope of one house. It deals with humanity, religion and the world all through the dynamic of a couple. Without giving much away, this film is an allegory of something that’s very topical and oftentimes ignored. Aronofsky creates the universe inside this beautiful hexagonal house and makes his muse, Jennifer Lawrence, carry the weight of the world on her shoulders. Each character means something and each event fits both the story and the allegory as a whole.

In a swarm of incredible performances (even by Kristen Wiig), Lawrence shines as the tormented wife of a famous poet. The camera focuses on her face throughout the entire movie and the audience is welcome to join the torment that follows her. She is warm, inviting, vulnerable, comforting, forgiving and stern all at the same time. This performance is unlike anything she’s done before. She truly gives her best performance to date. The rest of the cast is magnificent as well, especially Michelle Pfeiffer, though her role is not as prominent as the trailers made it seem. The extras are also truly remarkable. Most of them are there to make the audience hate them and they do so perfectly.

The movie, however, is not perfect. It struggles to target a wide audience. This fact makes mother! divisive among critics and audiences and will continue to be divided on it merits. It’s marketed as a horror film to draw in horror fans but it never really materializes as one. The challenging, aggressive, and abrasive end will make it difficult to sit through for some. Certainly, from the like of Aronofsky, its complexity will come off as pretentious to some. Aronofsky has definitely created a masterpiece, but he has sacrificed commercial appeal for the sake of getting this crazy idea on screen.

mother! is a thought-provoking story about the world we live in and the way we treat it and a story about love and compassion that will be talked about for ages to come. There will be conversations about each character, each thing, each moment, and they are all going to mean different things to different people. That’s exactly what Aronofsky wants: conversations. He wants people to have different interpretations of what happened and he wants people to talk about it. Aronofsky says he wants this film to stick with people and what he has created will certainly not be forgotten any time soon.

Jennifer Lawrence mother! darren aronosky javier bardem
With Mylestone, Your Memories Will Live on Forever
Phoniness Abounds In ‘Rebel In the Rye’ 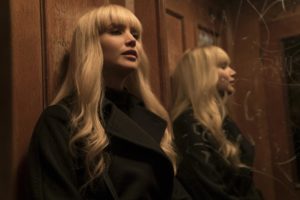