Home » What Happens When Eye Contact Means a Distant Connection 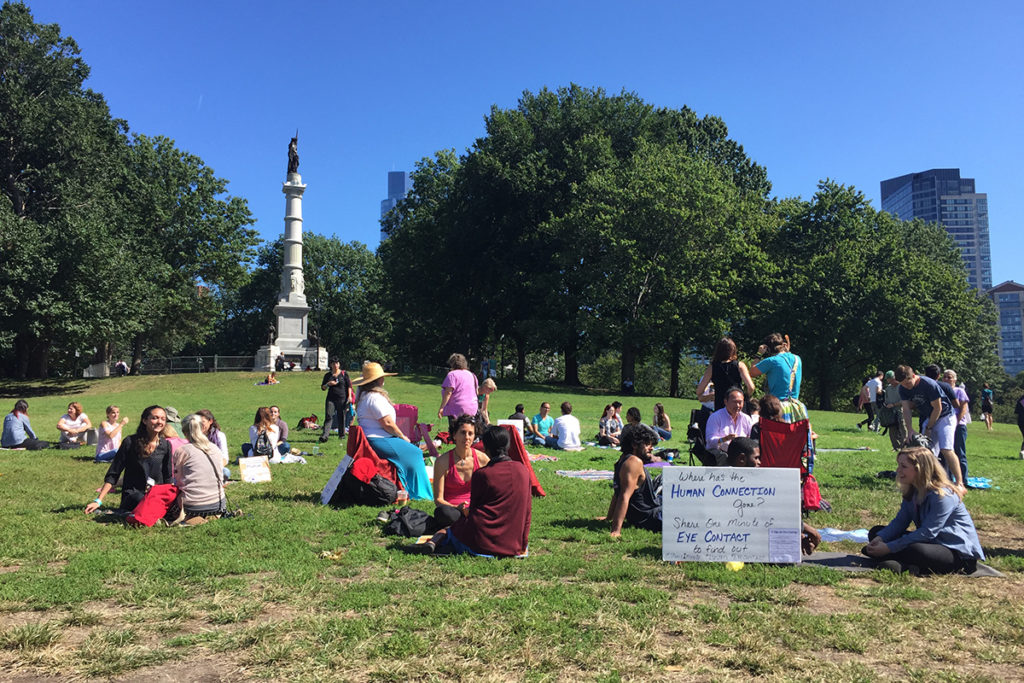 What Happens When Eye Contact Means a Distant Connection

You and I are sitting cross-legged on the floor like we used to when we were little.

We face each other, close enough for our knees to touch, close enough for you to see details of my face that even I don’t see very often. I can see the remnants of sleep lodged into the corner of your eye, and a scattering of faded freckles across your cheek bones. You have a tiny smudge of blue pen along your jawline, and the purplish bags under your eyes seem bigger than I remembered them being—have you been getting enough sleep? Probably not.

I grimace slightly, realizing that you can see the unsightly pores in my skin, and have no choice but to stare at the gigantic red spot that has popped up on my cheek. I know, it’s horrible and distracting, it may as well be the only thing on my face.

But I shake myself away from the thought—this is not the point of the experiment. So I look away from you face and pull out a time, setting it for a single minute.

“Ready?” I ask, pointing my finger above the start button. “Ready,” you reply, and we make eye contact as I hit start and the timer begins its slow countdown.

The seconds tick by and we hold eye contact, but it feels slightly uncomfortable given that we’re not even remotely interested in each other romantically. I am, however, determined not to mess this up, so we keep it going, like a bizarre kind of staring contest. I feel like I’m making really weird faces, trying to smile and seem friendly, but also trying not to smile and seem creepy at the same time. I try and relax my face, reaching for a kind of blankness that will let you focus on my eyes instead of the unintentional weirdness going on around them. Because that’s what we’re supposed to be doing after all, the great eye contact experiment that seems to have been everywhere since it popped up in the Modern Love column all those years ago.

It even popped up in the Boston Common last weekend as something organized by a Boston-based intuitive confidence coach named Deborah Knight. Knight’s event, called the World’s Biggest Eye Contact Experiment 2017, aimed to increase human connection by pairing strangers together and allowing them to stare into each other’s eyes for a full minute. And Bostonians actually posted up, staring into the eyes of a stranger and marveling at the feeling that resulted. You and I, we couldn’t make it on Saturday—or maybe we didn’t really want to make it—but we figured why not just try now?

So I stare into your eyes, noticing how they might not really be blue and considering it might just be the light overhead reflected in your eyes. The longer I stare into yours, the more I can’t help but wonder what you’re seeing in mine—nothing very interesting I’m sorry to say, because they’re pretty much as brown as brown can be. Maybe a generous person would argue that they have a touch of hazel, but then we would both know that you’re not fooling anyone. They’re brown, and the most flattering thing that can be said about them is that they share the same color family as chocolate. But this isn’t about you seeing me, it’s about me seeing you, so I stop thinking about my eyes, and look at yours, following the twisting threads of color within your irises, and trying to read the emotions behind them. I realize that it’s quite strange to be this close to someone without any real idea of what they’re thinking, and it gives me a shiver down the back of my spine.

I keep looking, and we relax into the exercise, letting our posture slump and our eyelids droop a little bit to stop the stinging. The more we relax, the more I enjoy the moment, relishing the odd feeling of being so physically close to someone without expecting or fearing anything from them, and hopefully without them expecting or fearing anything from me.

Then, right as I am wondering if we are on the brink of reaching a nirvana-level of interpersonal understanding, the timer blare, beeping insistently. I sit straight again and try to subtly put some distance between the two of us—I don’t want you to think that I’m running away from you, but I don’t want you to feel any aura of oddball weakness emanating from me either. I’m normal, and so are you, so now that our minute is over we will laugh off what a weird idea this was and get up off the ground.

But instead of feeling complete and one with humanity, I feel weirdly hollow. The whole thing feels a little superficial, a little bit too much the oversharing kind of closeness that we value more and more in today’s world. We’re a close-knit generation after all, many of us sharing the details of our lives with anyone who will listen over social media. Or even worse we pretend to be open but truly hide the contents of our mind, burying them deep down in a space that becomes increasingly difficult to unearth.

We are close to the strangers surrounding us, trumpeting our triumphs, our struggles, our quirks, but at what point does this preformed closeness actually make us more distant?

After you and I moved back to our separate corners of the room, I started considering the people that I would consider myself close to. When was the last time that I stared deeply into my brothers’ eyes, my parents’ eyes, the eyes of my best friend? Maybe never. Does this say something about my relationships, my ability to relate to those around me?

I guess the answer is who knows. But I have to believe that connection goes far beyond sight and far beyond what you can show the world around you. For me, connection arises from detecting something invisible in the people around you, something you wouldn’t get from perusing their social media feeds, or from staring into their eyes for 60 seconds. 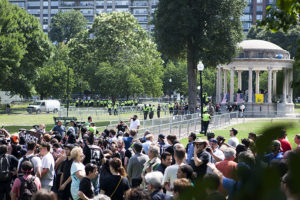