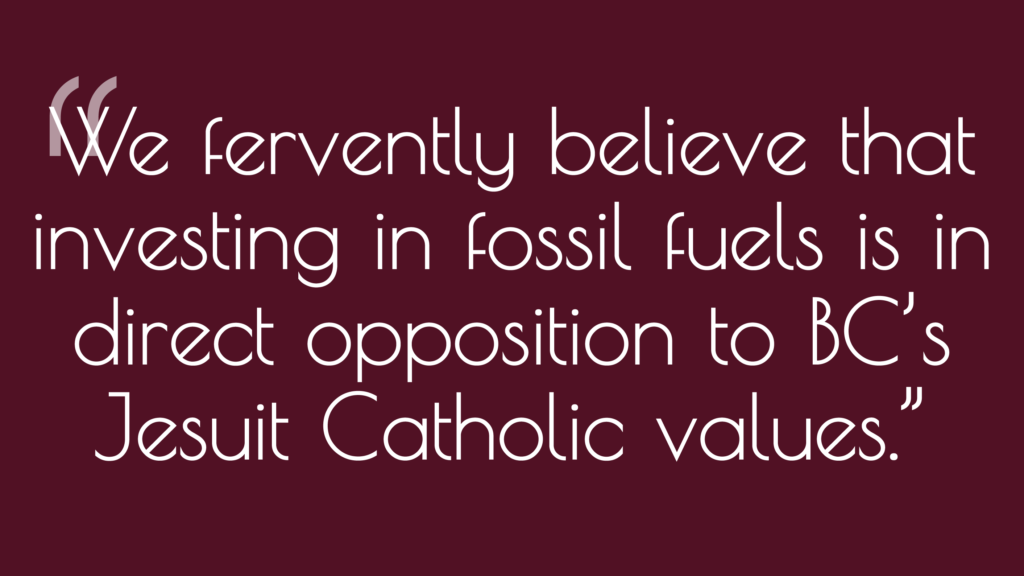 Boston College’s endowment now stands at over $2.4 billion, growing nearly $300 million in the past year alone. But where does our money come from? While BC doesn’t disclose specific details, we know that 49 percent of its endowment is in equities. The fossil fuel industry makes up about 13 percent of the stock market, so conceivably BC has 6.5 percent  of its endowment invested in fossil fuels, or a staggering $156 million. If this is accurate, we profited over $20 million last year alone off of our investments in fossil fuels.

While we in Climate Justice at BC (CJBC) support BC’s right to increase our university’s endowment, we fervently believe that investing in fossil fuels is in direct opposition to BC’s Jesuit Catholic values. BC needs to join the movement of nearly 800 institutions worldwide that have divested $5.5 trillion.

Fossil fuel consumption is one of the primary contributors to climate change. According to the U.S. Department of Defense, it is the most dangerous issue facing our country. This makes divesting essential. Unfortunately the financial and political power of the fossil fuel industry stands in the way of this crucial transformation. In order to topple the industry’s hegemony we need to divest from fossil fuels and reinvest in renewable energies. Divestment is not only the right thing to do, it makes financial sense. A plurality of studies have shown that divestment protects portfolios from the financial risks of climate change.

Most important, however, BC’s Jesuit values compel us to divest. The preeminent Jesuit in the world, Pope Francis, wrote his first solo encyclical Laudato si’ on the Catholic moral imperative to take part in the fight against climate change. Just this month over 40 Catholic institutions divested, joining a growing number of Catholic institutions including Georgetown and the University of Dayton. There is even historical precedent at BC. In 1985 under the guidance of University President Rev. J. Donald Monan, S.J., BC divested from South African companies during Apartheid. The Financial VP at the time, John Smith, based divestment on moral grounds, stating, “[I]f our investment advisor bought stock in a company in clear violation of our ethical standards, we would dump it without questioning it. Some stocks are just not worth it.”

CJBC is committed to BC divesting. We’ve shown our commitment through five years of devoted activism that continues this semester that began with our silent rally outside of Pops on the Heights. While we have always attempted to work amicably with the administration and will continue to do so, we will do everything in our power to have BC join its peers in living up to Catholic values and stop profiting off of deadly fossil fuels. In BC’s own words, a university “discloses its values by the way it behaves as much as by what it says about itself.” Five years ago we met with University President Rev. William P. Leahy, S.J., but nothing has changed. We are reaching out again in good faith to talk about divestment and BC’s obligation to head Pope Francis’s call. If this is unsuccessful, we will escalate the pressure, building power from the ground up because we know the BC community wants BC to live up to its stated values.