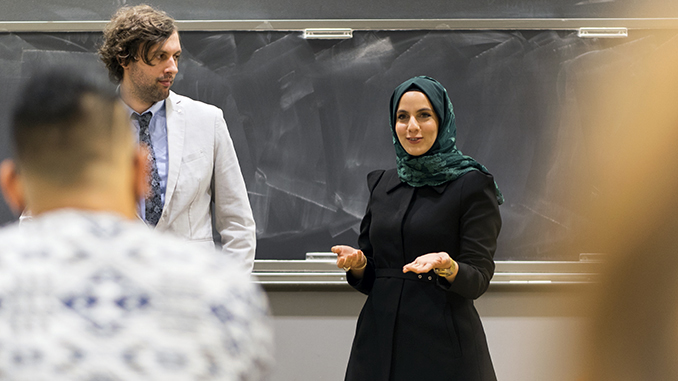 Film allows us to witness many things without having lived through them. This facet of film makes it a powerful tool when used to show people more of the world than we would have otherwise seen. Boston College students and professors gathered in a sleek and spacious classroom in Fulton to watch scenes of a war occurring halfway across the globe. The exhibition was of two short films concerning the war in Syria, presented on Oct. 3 by the directors, husband and wife Muhammad & Samah Safi Bayazid. Samah Safi, who grew up in Jordan and attended the New York Film Academy, said the purpose of these films is “to humanize people who are just being labeled refugee.” Indeed, the works exhibited displayed an inclination toward the emotional, human aspect of the conflicts which Western audiences only glimpse through statistics and news-footage. The husband-wife duo reinterpret the struggles of individuals affected by the Syrian Civil War and migrant crisis through a non-politicized lens, focusing on the plight of children who, like the viewer, are without a tangible sense of their circumstance.

The first of these films, Oshina, follows the day-to-day activities of a woodworker tormented by a past he cannot escape. The film opens on a shot of a man gagged and blindfolded, sweat and tears streaming down his face. His conditions suggest that of a political prisoner. But he soon enough wakes, is greeted by his daughter who is the only other character to appear in the film. Both attend to their separate activities, the man cutting wood to build some object while his daughter crafts a crown of flowers. The woodworker fluctuates between moments of hope and extreme sadness, always offset by a return to that nightmare realm in which his anguish is made palatable. The film’s ending reveals he has been building a coffin for his daughter who died while emigrating from Syria. In the final shot, the camera leaves the tightly enclosed spaces that have thus far defined the narrative and glides over the ocean into which the woodworker sends his most precious creation.

The second film, Fire Palace, exchanges the father’s perspective for that of the child. A young boy spies his father lining presents under a tree for Christmas. Without context, one would assume the scene is set in America, or any other country in which the tradition is common. But a sudden roaring overhead disturbs the rite’s tranquility—in seconds the house is blown to bits. To protect himself, the boy hides in the fireplace, where he wakes some time later covered in ash and rubble. The film focuses on the boy’s inert and desperate condition, highlighting the tedious monotony of survival within this small and darkly-lit cubicle. He spots a bird perched along the chimney’s edge, tweeting at nothing, like a reminder of nature’s indifference to the atrocities of war. When a second plane roars overhead, the child attempts to escape from his sanctuary turned prison. After this second onslaught, the child wakes with ash covering his body. The ash and dust, paralleling snow on Christmas, descend from the chimney. He looks up, and spots Santa Claus peeking over the narrow chimney ceiling. The figure is in fact a member of the White Helmets, an organization that assists victims of war in Syria.

The directors share a deep emotional connection to the backstories of these films.

“Oshina is a peace of mind,” Samah Safi said after the screening, “a peace [which migrants] usually find nowhere in this world.” The single example of the woodworker’s daughter is meant to illuminate the 600 Syrian children who die each year crossing the Mediterranean.

“We believe in informing people, in the power of the people,” Muhammad said, detailing the positive reception their films have thus far garnered. Their films have been shown in Washington, D.C. to audiences of politicians.

“But is positive feedback going to convert them to action, or nodding and smiles?” Muhammad asked. Fire-Palace was based on the true story of Omran Daqneesh, a five-year old boy whose survival of an air-strike garnered intense media-attention. Muhammad revealed that the child-actor playing Omran had personally experienced the exact same situation.

“The boy said he knew how to do this, he had been through this before,” Muhammad said.

Such events at which we can only gape in awe and befuddlement are the reality of many children living in Syrian war zones. The Bayazaids blend the frequency of these events with the sheer difficulty of comprehending them, creating a dream-like world devoid of speech and language, in which the victim’s perspective becomes everything.

When asked how they maintain hope, Samah Safi responded: “We don’t have any other choice—hope is all we have. Sit and cry, or just try to recharge.”

Indeed, these films exhibited are the spiritual triumph over atrocity, a documentation of the human lives whose stories are lost in the spectacle of modern news-entertainment.