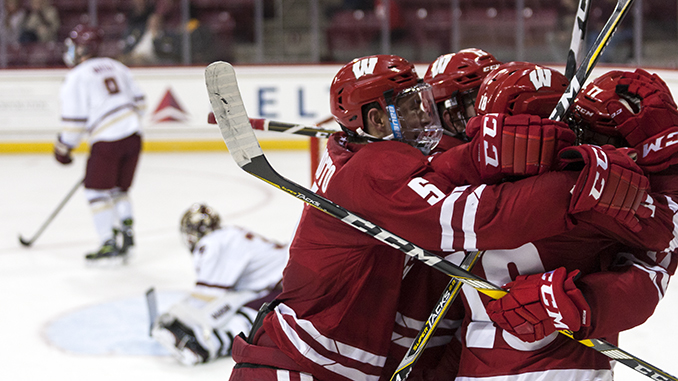 Joseph Woll yelled at the referee in disbelief.

In the rarest of rare calls, Woll had been booked for roughing on Wisconsin’s Seamus Malone. The junior center had placed himself squarely in the crease, eyeing a deflection. But the Boston College men’s hockey goaltender did what goalies do—he tried to force him out of the way. Only this time, the move was a little aggressive. And, with the Eagles already on the penalty kill, it didn’t exactly come at an ideal time.

Yes, we all know the reputations of John Gravallese, Kevin Keenan, and the majority of the Hockey East officiating crews. But also, Woll had knocked Malone to the ice by pushing him down by the face.

It had been the final frustration in a hellacious second period for the Eagles. While nothing came of that minute-long 5-on-3, missed chances in the second swung the momentum away from No. 13 BC in a 5-2 loss to No. 10 Wisconsin.

The Eagles (0-1-1) put up plenty of chances against their Big Ten foes. The freshman third line of Logan Hutsko, Christopher Grando, and Aapeli Räsänen combined for 14 shots, a significantly improved performance from the season opener. Hutsko in particular showed off his speed with seven of those shots.

“We weren’t sure how it was going to work out putting three freshmen together,” head coach Jerry York said. “But they were fantastic.”

Still, most of those shots ended in uneaten rebounds. Yet his breakaway chance early in the first, tossed away by Wisconsin (3-1-0) goaltender Kyle Hayton set that almost-but-not-quite tone. Both Graham McPhee and Christopher Brown followed those up with turnover chances right in front of the grad transfer goalie, but he stuffed each one.

“That’s a fast team that causes turnovers because of their speed and quickness,” said Wisconsin head coach Tony Granato. “Our goalie made some big saves to help us win on the road.”

A turnover by David Cotton helped Wisconsin get on the board early. Linus Weissbach found Trent Frederic, a first-round draft pick of the Boston Bruins, streaking toward Woll in net. The sophomore uncorked a blast past the head of Woll, who got his goaltending start thanks to Frederic’s first communion, for a 1-0 lead.

The turnover caused some frustration from the Eagles side. Cotton goaded Frederic into a hitting after the whistle penalty just 40 seconds after the goal. The power play gave McPhee enough of an advantage to snipe the equalizer from the dot at the right circle on one leg.

BC held the shot advantage early in the second, but defenseman Tim Davison took advantage of a screen to put Wisconsin up 2-1 off an offensive zone faceoff. Ten minutes later, Malone caught a pass from Will Johnson on a 2-on-1 breakaway—Johnson made a stellar pass to Malone from the far left corner on which Woll had no chance despite his best stretched-out efforts.

Throughout that second frame, the Eagles struggled to gain momentum because they constantly played a man down. Casey Fitzgerald took a cross check on another post-whistle scrum, and Luke McInnis almost had back-to-back penalties late in the frame. That’s all not to mention the roughing penalty by Woll when he pushed Malone in the face. And while BC remained stout on the penalty kill—Wisconsin was 0-for-6 on the day—it prevented any offensive momentum. On the other end, the Badgers played with a lot of discipline—they only allowed one power-play chance for BC.

Five minutes into the third, Matthew Freytag put the dagger in for Wisconsin.

By the time Grando notched his goal—a perfect tag-team with Hutsko, slotted low past an outstretched Hayton—the Eagles were dug in too deep a hole.

York accentuated the growth of his primarily freshman unit after the game, given their strong performance. After all, the Eagles have no seniors and only four juniors, though he conceded he expects better from his junior forwards, Brown and J.D. Dudek. But he noted the balancing act he has to play in helping his young team see the positives, citing it as “the coach’s job” to make sure that not every loss is created equal.

“Before the season, we wondered ‘Where’s our offense going to come from?’” York said. “But boy, we moved pucks tonight, created some outstanding chances to score goals. … It didn’t go up on the board, you’ve got to finish, but I liked our offense.”

Throughout the season, those BC freshmen will continue to grow. But without finishing and putting those chances on the board, York will continue to have to help them see the positives in losses.