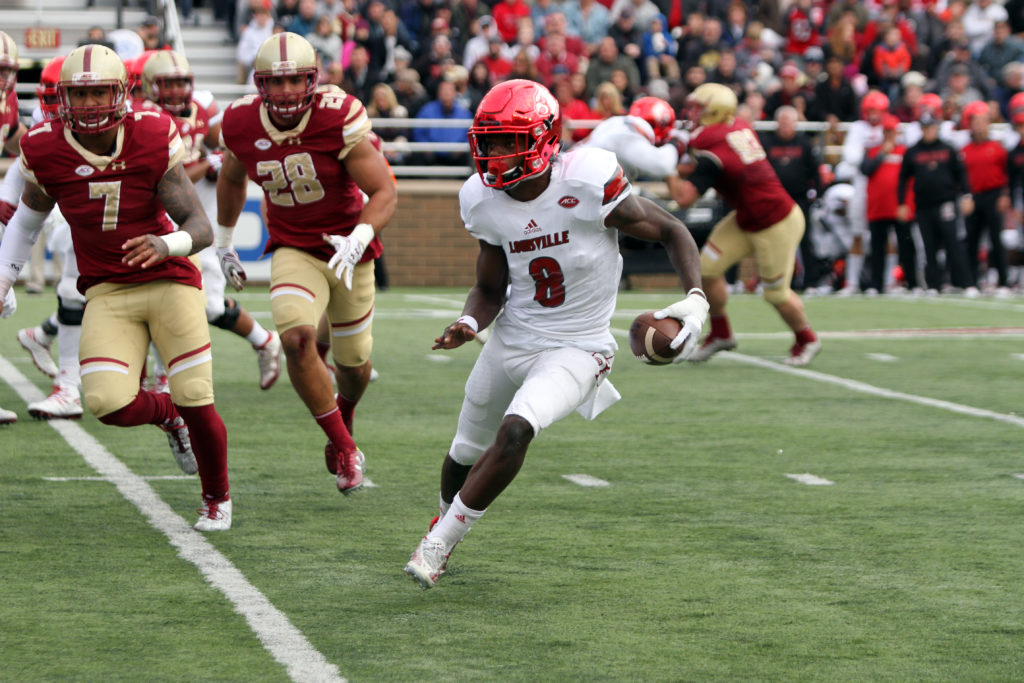 Sometimes you just can’t help getting angry when people that don’t know you, or the investment you make in your work, constantly sling pointed critiques your way. When you’re constantly roasted in front of the entire world, the rage can come to a frothing boil, sending a message to your critics: “I’ll show you.”

After largely tamping down his emotional outbursts to negative feedback from the Twitterverse this season, Boston College’s head football coach Steve Addazio had a noteworthy slip up Saturday night, following a disappointing 23-10 home defeat for BC (2-4, 0-3 Atlantic Coast) at the hands of No. 16 Virginia Tech (5-1, 1-1). When asked about whether his offense could move past its mistakes and get to a level where they could consistently execute, Addazio’s tone quickly changed.

Whether it came from a place of immense frustration or as a message of belief directed to his players, Addazio’s defiant assertion that the offense will soon be firing on all cylinders rang a bit hollow given the broad struggles of the unit. While Anthony Brown’s confidence in the deep ball may be increasing and while the play action pass game nearly produced some chunk plays against the Hokies, on the whole, this is an offense that has gone from averaging 87 plays per game over the first three games to 69 plays per game over the last three games due to a deterioration in third down efficiency.

As a team that has scored more than 10 points just once in its last six conference games, dating back to last season, the Eagles certainly appear a long way off from fulfilling the promise of Addazio, at a time when the coach could really benefit from some tangible signs of progress. Addazio himself believes that a wicked combination of scheduling and injuries has greatly intensified the difficulty of such progress.

“There are not a ton of teams in the country that are playing at that level week in and week out right now,” Addazio noted, before elaborating on the team’s injury woes. “We’re down six or seven [players] right now and we can’t go down nine. Nobody in America can really recover from that.”

While the jury is still out on the validity of those arguments, BC will travel to face an opponent that meets Addazio’s criteria on Saturday. Bobby Petrino’s Louisville (4-2, 1-2) squad has both played a difficult early schedule and suffered a devastating rash of injuries. With a humiliating 47-21 September loss to then-No. 3 Clemson (6-0, 4-0) in Death Valley and a painful 39-25 loss at then-No. 24 North Carolina State (5-1, 3-0) last week, the Cardinals have faced significantly more adversity than they had at this point last season.

Fortunately for Petrino, he can count upon the reigning Heisman Trophy winner to carry the team through these rough waters. Lamar Jackson continues to build upon his monster 2016 campaign, where he threw for 3,543 yards, ran for 1,571 yards and totaled a whopping 51 touchdowns. This season, despite a massive reduction in both the receiving and rushing talent around him, he might actually be doing a better job, handling an even more massive offensive burden and helping Louisville average 557.8 yards of total offense per game, fifth nationally.

Jackson has completed 62.2 percent of his passes—up from 56.2 in 2016—and generally looks much more comfortable making reads and moving around in the pocket, looking to throw the ball instead of tucking it down and running when his first read is covered. He’s fourth in the nation with 1,990 passing yards, on pace to top his passing totals from last season by over 500 yards. On the ground, between read-option plays, designed runs and scrambles, often precipitated by Louisville’s weak offensive line, Jackson has totaled 91 rushing attempts, racking up 510 yards and seven touchdowns. No other Cardinals player has run the ball more than 39 times.

Decimated by injury and roster turnover, Louisville’s committee of running backs has been borderline useless this season. After losing their top back from last season—Brandon Radcliff, who had over 900 rushing yards in 2016—and seeing his returning backup, Jeremy Smith, succumb to a season-ending foot injury in Week One, the Cardinals’ rushing attack has been headed by senior Malik Williams and former quarterback Reggie Bonnafon.

Though neither received more than nine carries in any of the last four games, Williams was at least highly efficient, averaging seven yards per clip. But the injury bug struck again last week, as he suffered a significant wrist injury in the loss to NC State. Now, whatever small amount of carries isn’t devoted to Jackson will fall to Bonnafon, who is averaging just 4.2 yards per carry and hasn’t run for more than 33 yards in a game this season.

Jackson’s receiving corps is also decimated relative to last year’s unit. Petrino lost his top three receivers from last season to graduation, including top target James Quick. Junior Jaylen Smith—Louisville’s top returning receiver—has missed the last three weeks with a wrist injury after totaling 379 receiving yards over the first three games, though he may be able to return to action this weekend. Freshman Dez Fitzpatrick has been the main beneficiary of Smith’s absence, leading the team with 414 receiving yards and catching 10 passes for 134 yards last week.

On Saturday afternoon, expect Jackson to look for quick routes in the passing game. Petrino will want to get the ball out of the hands of his prized signal caller before his shaky offensive line allows BC’s potent pass rush into the backfield. Additionally, after watching BC struggle mightily to defend slants and post routes behind the linebackers off of play action against VT, Jackson will most likely opt to attack the heart of the Eagles’ zone. The threat of the run game will likely be more useful to Louisville than the actual running game. Jackson should also scatter between 15 and 20 rushing attempts throughout the game, looking to prey upon BC’s noted struggles in defending mobile quarterbacks this season. Saturday could be a banner day for Jackson on the ground.

With the explosive Louisville offense stressing the BC defense, the onus will be on the Eagles’ much maligned offense to make this game competitive. Fortunately for Addazio, Petrino’s defense has been hit with almost as many significant injuries as BC’s. Star cornerback and punt returner Jaire Alexander suffered a knee injury against Purdue in Week One and only returned last week, at less than full strength. As a result, the Cardinals pass defense has greatly suffered, ranking 87th nationally in yards allowed per game, despite the best efforts of safety Zykiesis Cannon, the team’s leading tackler.

On the interior, despite senior defensive tackle Drew Bailey being sidelined since Week One with a high ankle sprain, the Cardinals have been surprisingly stout, ranking 23rd in rush yards allowed per game. Defensive ends Jonathan Greenard, James Hearns, and Travon Young have combined for 8.5 sacks and 20 tackles for loss on the season, getting into the opposing backfield at will and aggressively stifling the run game.

Louisville’s defensive strength will make it difficult for the Eagles to improve upon a running attack that saw A.J. Dillon and Jonathan Hilliman combine for just 60 yards on 22 carries last week. Instead, the team will need to consistently manufacture completions in the passing game, something that has proven to be quite difficult all season. After nearly connecting on several deep passes to Kobay White and Tommy Sweeney last week, BC needs Brown to make this the week he finally ignites the downfield passing game. Trying to subsist on quick throws and power runs against Louisville will certainly not produce the offense needed to keep pace with Jackson.

And therein lies the crucial answer to BC’s offensive issues. Addazio sees the injuries and the schedule difficulty as limiting factors because—as presently constituted—the team lacks a player or group of players that can function like Jackson, someone who can put the team on their back, even when the odds are against them.

If things are to come together and be beautiful, as Addazio believes they will, that must change. Otherwise, we might not ever be able to determine the clock for this transformation.