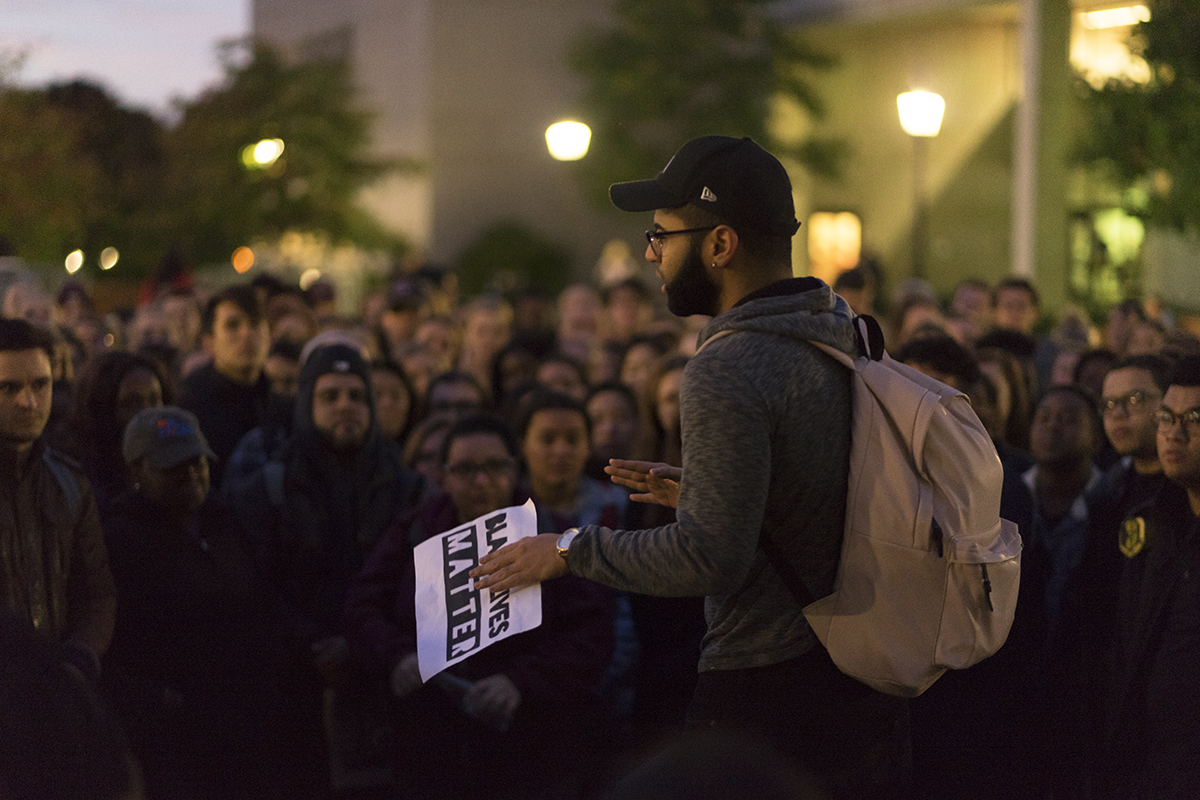 About 200 students gathered on O’Neill Plaza on Monday evening to speak out against recent racist incidents on campus and share their demands, which they will present to the University on Friday following a “Silence Is Still Violence” rally.

On Friday, two signs reading “Black Lives Matter” in Roncalli Hall were defaced with the word “don’t” and “do not” written in between “lives” and “matter.” In addition, a screenshot of a Snapchat purportedly from a BC student showing a blackened steak and cheese with the caption “I like my steak and cheese like I like my slaves” has been circulating widely on Facebook since Sunday night.

More than 20 students spoke to the crowd at the event Monday. Dean of Students Thomas Mogan was present. Brian Paula, LSOE ’19, thanked Mogan for coming to the event, but criticized other members of the administration for not attending. It is unconfirmed at this time whether or not Mogan was BC’s only faculty or administrative representative.

“I’m sorry Dean Mogan, you’re great, but you’re the only one that’s ever here … and at this point there’s only so much you can do,” Paula said.

Nicole Diaz, co-director of the AHANA+ Caucus and MCAS ’19, emceed the event. She said the events this weekend were racially motivated, and there was no other excuse for them.

“This incident was f—ing racially motivated,” Diaz said. “We’re going to say it, they’re going to say it, and we’re not going to give them the out of not f—ing saying that this was about race. Because it f—ing was. There is nothing that is not racist in 2017 about making a f—ing joke about slavery. That’s not funny.”

Several students shared their stories of facing racist acts on campus. One student told a story of how while she was walking back to her room with her friends during her freshman year, a couple of students threw fried chicken at her and her friends, allegedly saying “It’s the black kids, they deserve it. They want the f—ing chicken.”

She said she went to BC administrators three years ago to report this incident but nothing was done about it. She said she was told she would receive an email in regard to the University’s response to the incident, but she never got a reply. The Heights was unable at press time to confirm her account of those events.

Akosua Achampong, Undergraduate Government of BC president and MCAS ’18, said students that feel unsafe at BC should tell their parents, connections, professors, and everyone around them. She encouraged students to know when their professors’ office hours are and share their concerns. At an academic institution, she said, the primary way to combat ignorance is to speak up during class.

“We’re not all going to be free until the most marginalized person is free: black, queer, woman, not able-bodied,” Achampong said.

Over the course of the gathering, a few students who spoke said that BC was not built for them, but only for white people.

Students then began to share some suggestions for demands they would present to the University during Friday’s “Silence is Still Violence” march.

Sara Elzeini, a member of the Muslim Students Association and MCAS ’18, made several demands, including harsher punishment for racist acts, support for victims of these acts, mandatory programs for ignorance, similar to BC’s bystander intervention program, and an increase in the number of faculty of color on campus. She also called for the University’s top administrators, including University President Rev. William P. Leahy, S.J., to hold open office hours for students to voice their concerns.

The Silence Is Still Violence march will start on Friday at noon, beginning in McElroy Commons and ending at Corcoran Commons. At Corcoran, the students will present formal demands they plan to make of the University. A Silence is Violence march was also held last year, in late September, in response to a homophobic slur being written on a parking sign in the Mod Lot. This rally and last Friday’s incident coincide with AHANA Acronym Week.

Paula said he had made a mistake in coming to BC, and profanely criticized University Spokesman Jack Dunn for a statement he gave in an interview with The Heights in 2015 regarding the actions and position of Eradicate BC Racism. Paula said he was particularly upset with Dunn’s statement that “the supposition that BC is an institutionally racist place is a difficult argument to make.”

In that statement to The Heights, Dunn also said that Eradicate “is formed based on that supposition and if they said we’re opposed to racism all of us would work with them—we all are. All of us abhor racism in every form.”

Paula said that people should not be scared of acting out. He told freshmen in attendance to not be complacent because that is a mistake that he and his fellow upperclassmen made.