Directors Craft the Sinister Uncanny in ‘Venus in Fur’

Venus in Fur, a metatheatrical comedy drama, refuses to be tied down. Its characters include a misogynistic director, and an actress auditioning for a role in a play, adapted from an 1870s novel entitled Venus in Furs. The actress, Vanda, is auditioning for the role of Vanda in this play, which suggests she has an uncanny aptitude for the part, even though she initially seems out of her depth. Furthermore, the similarities between the names Vanda, and the Roman goddess for which the play is named, Venus, presents an association that generates an unsettling doubt and intrigue for viewers. As the Boston College Dramatics Society brings it to the stage, it begins to take on a life of its own, subverting audience expectations and sustaining a mysterious tension through its one-act, 90 minute spectacle.

After forming a team bond during production of last spring’s This is Our Youth, director Michael Quinn (MCAS ʼ19) and co-director Lena Hymel (LSOE ʼ20) began to hash out the details of staging their adaptation of Venus in Fur. Quinn had a specific criteria on narrowing down the possibilities for selecting a play.

“Not New England, no graduate or college students, no rich people, no stories about writers,” Quinn said. “But ironically, Venus in Fur is basically about several of those topics, except it attacks the overeducated, white guy, writer types.”

The play focuses on the professional expression of misogyny in the character of Thomas Novack, the director of the play of the stage. But Venus in Fur is not a simplistic, obvious portrayal of sexism and its flaws. Quinn and Hymel noted that the misogyny explored in the play was more about that which resides in people’s hearts, embedded in the fabric of society. The show aims to interrogate what it means to be a misogynist in one’s own work, and uses the well-developed humanity of its characters to present the issue as more complicated than meets the eye.

Venus in Fur has just two characters, an actress, Vanda (Deborah Aboaba, MCAS ʼ21),  and a director, Thomas (Dustin Uher, LSOE ʼ19). Given the play is one extended scene, set in one audition room, the directing duo faced the challenge of keeping the audience’s attention through varying the image on the stage. The minimal use of technology in the show allows the team to highlight the characters and the dynamic that exists between them, but requires creativity to explore that relationship in the open space. Quinn and Hymel use blocking techniques to illustrate the shifts in power dynamics that exist in the play, and ensure that the scene never goes stagnant. Quinn explained that Thomas would start out hovering around his desk, near the safety of all his notes, and Vanda would take up residence on the divan. But the nature of their relationship will physically manifest itself with how the actors move closer together or further apart from each other onstage, at times becoming a free for all, where the actors move all over the stage. The constant element throughout these movements is that the focus never strays from the performances of the actors.

“A good script and performances will always triumph over other misfortunes,” Quinn said. “When blocking with the actors, I’m always making sure the audience can see them and their faces clearly.”

As directors themselves, there was a surprising amount of overlap between the experience of Thomas as a director, and Quinn and Hymel’s own experience with the job.

“It was horrifyingly similar,” Quinn said. “Between auditions, I told Lena that I wanted someone to read Vanda in a particular fashion, and not five minutes later, after getting asked to audition on the day of the reading, Debbie fits the role perfectly. She was eerily similar to our creative vision, which was surreal.”

Aboaba’s performance zeroes in on the ambiguities contained within Vanda’s character, exploring who she is as a human, but also how Venus’ atmosphere might affect her motivations.

“There’s a viciousness to targeting Thomas, to the idea of Venus coming down to attack this one guy,” Quinn said.

Vanda is intensely clever, and almost always has control of her situation, knowing more about the role for which she’s auditioning than she lets on. She’s the perfect opponent for the sinister, unchecked misogyny that many don’t even notice in the real world, even when it’s right in front of them.

“Her cleverness is insidious—villainy that doesn’t present itself as such,” Quinn said. “She starts off acting ditsy and timid, and completely transforms over the course of the play. It’s such a gift to have a clear journey for a character.”

The purpose of Venus in the play has reverberating consequences for its performance. Quinn explained that the association between Vanda and the goddess brings an element of the supernatural into the show, and expands the questions surrounding Vanda to include how she’s disguising herself, and how she presents herself to Thomas. The directors make pointed use of lighting through lightning strikes that crack through the stage after Vanda makes consequential statements, which opens the door to her potentially having supernatural power. However, the directing team wanted to avoid any obvious labeling of Vanda as such, so as to maintain the tension that the mystery of her identity creates.

“We wanted to air on the side of realism,” Quinn said. “We don’t want to watch witchcraft unfold. We want to build doubt until the last moment about Vanda, and whether she is a goddess or not.”

Quinn wants to steer clear of staging the play to enact any heavy-handed moralizing of the audience. He considers a performance to be more impactful when the audience can see people living out issues and trying to triumph over them, instead of wrapping everything up in a neat little bow. At one point, Vanda states that Thomas wants to be “ambivalent,” while Thomas replies he wants to be “ambiguous.” The distinction between stating one’s mixed opinions and refusing to even give a semblance of certainty to them underscores the power of subtlety and uncertainty driving the supernatural aspect of the play.

“Embedding the play in our reality makes it more interesting,” Quinn said. “Maybe it’s just life, or a coincidence. Or, maybe, it’s the supernatural.”

Quinn cited maverick film director David Lynch as inspiration for this refusal to provide definite answers or closure. The director is known for his philosophy that denying audiences closure prevents them from compartmentalizing any challenging material they saw, or from simply forgetting what they watched. The directors of Venus in Fur channel that mindset through their fierce preservation of ambiguity in the play, which also allows viewers to relate more to Vanda, as if she might just be a human after all. It also invites them to entertain the themes of the play, and evaluate how and whether to implement them.

“Leaving it open as to whether she’s a goddess or a human makes it seem more like, ‘Wow, could I make that kind of stand? Am I strong enough?’” Hymel said.

Ultimately, the ability of both the characters and the audience to get lost in the performances and into a devious, ruthless reality stems from Quinn and Hymel’s vision to capture ambiguity to set it free. 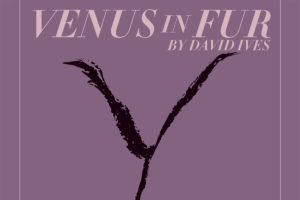