A steak cut in half and labeled, “diversity at BC.” Captioned: “Waiter: ‘Your steak sir. Very rare’ Me: ‘Thanks. Wow that is rare.’”

A father talking to his daughter with the dialogue, “‘Daddy, why is my brother named Paris?’ ‘Because he was conceived in Paris.’ ‘What about me?’ ‘Enough questions Gasson 305.”

Eighth-grade boys flipping off the camera, captioned, “When the Agoros Bouncer says ‘you’re like 12’ but you’re actually 14 and a half.”

All of these memes can be found in Boston College Memes for Jesuit Tweens, BC’s most popular Facebook meme group, which now has over 4,000 members. In February 2017, the page was first called BC Turkeyspotting. As its name suggests, it was a forum for people to post pictures of turkeys they spotted on campus. Founders and moderators Erin Olejnik and Edward Byrne, both MCAS ’18, and Grace Rice, CSOM ’18, soon learned that there weren’t that many turkeys to spot, and the page died down. Then, one lazy morning in April, Byrne texted his two friends to ask if they wanted to day drink.

Byrne showed up to their dorm to find Rice and Olejnik behind their computers, photoshopping away. Collegiate meme groups were receiving attention in the news, and Rice felt a calling after reading an article, which shined a light on the collegiate meme culture and pages at schools like Harvard, Yale, and the University of California, Berkeley. The three agreed that if BC were to compete with its fellow top-30 colleges, it needed more than brilliant faculty, marvelous stone buildings, and robust endowment—BC needed dank memes.

On May 2, Olejnik gave the turkey spotting page a makeover. Drawing inspiration from Berkeley’s “UC Berkeley Memes for Edgy Teens,” the three agreed to name their brainchild, “Boston College Memes for Jesuit Tweens.”

“The first memes were not the funniest, nor the dankest,” Byrne admits. “It was a lot of s—tposting, just sort of the three of us just laughing at our own jokes.”

“S—tposting” refers to the act of posting material that is purposefully and ironically low quality. The appeal of the memes was not the humor at first—it was the fact that after watching niche memes about other schools gain attention, BC now had its own page, albeit small, with quasi-corny jokes about campus life.

One of the original memes, posted on May 3, 2016, is a plain white background with black text. It reads, “You: ‘gah-sun’ Me, an intellectual: Gassõn.” Another is an image of Meryl Streep in The Devil Wears Prada, captioned, “A retro Denver Nuggets Jersey? For a darty? Groundbreaking.”

No one envisioned the page growing to the extent it has.

“It started out as a small group,” Rice said. “We thought it would just be for our friends.”

The BC page was not the trio’s first encounter with memes. Byrne, Rice, and Olejnik all say they are active in Leftbook, a corner of Facebook that is particularly progressive. Rice is member of the group “Intersectional Witchcraft,” and Byrne enjoys the content posted in “New Urbanist Memes for Transit-Oriented Teens.” The common thread that binds Leftbook groups is a set of two standards. First, there is no tolerance for any isms or ias—racism, sexism, ableism, homophobia, xenophobia, or transphobia. And second, there is an expectation that jokes will be rooted in a progressive political commentary or opinion.

With a shared ideology came the given that they too would not tolerate any discriminatory humor on the new page. Theirs is not the edgy, politically-incorrect humor found in the bowels of 4chan.

A recurring criticism made in the page is the University’s lack of an LGBTQ+ resource center. One popular meme is the template of the mocking Spongebob with the caption, “Student body: can we please have an LGBTQ resource center? Administration: cAn wEE PLs hAvE a LMNOP rEsOuRcE CeNteR?”

Another meme displays two rows of four pills, and each pill has a corresponding change to BC. The caption asks, “which would you pick?” The pills’ powers range from, “Increase GPA by .01,” to, “[Mozzarella] sticks always have good texture” and the final pill at the end of the second row, “Adequate mental health resources.”

Over the summer, Olejnik told orientation leaders to plug the page to their incoming freshmen. On July 31, Rice posted in the group, “If you are a member of the class of 2021 add literally everyone you meet at orientation. YOU ARE THE FUTURE.” The number of members skyrocketed thanks to the incoming freshmen.

“Seeing the new members active made us realize we started a legacy,” Olejnik said.

New members will notice a distinct tone of humor in the group. Byrne acknowledges that a lot of the same jokes get made over and over, and that the criticisms of BC tend to be from a more liberal standpoint. But Byrne, Rice, and Olejnik think that the notion of a liberal echo chamber should not carry a negative connotation, especially on a campus like BC’s where, they feel, much of the discourse is conservative.

One meme is a picture of four clean-cut white kids in preppy clothing with the caption, “Diversity doesn’t just mean skin color! It also means diversity of opinion!!!!!!” Another meme is a picture of a woman talking to a toddler, captioned, “CSOM Student: ‘what are you learning in school?’ kindergartner: ‘shaped and colors’ CSOM Student: ‘lmao good luck getting a job with that.’”

This CSOM kid is not an abstract image to Byrne—he sees parts of himself in the stereotype, as he too, “[wears] Patagonia and has privilege.” The page mocks the perceived stereotype of BC students in an attempt to create an environment of inclusion. He doesn’t want kids to stop wearing Vineyard Vines, but he’d like the salmon-shorted crew to recognize their privilege.

“No CSOM guy wants to hear a Social Justice Warrior lecture him on all the toxic cultures he perpetuates,” Byrne said. “But they can laugh at a joke that mocks them.”

Byrne sees memes as “jokes with discourse surrounding them,” and believes he has the obligation to make these criticisms because he recognizes his privilege.

“We have a platform,” Byrne said. “We’re a bunch of white kids. We do have an obligation to say something because if a person of color is gonna go in and say something, he or she will be written off.”

Last weekend, the moderators felt compelled to speak up in light of the racially-motivated sign vandalization and other incidents. But they did not want to break from the format with which they address other issues—they wanted to make memes. The first meme was a criticism of the administration’s response to the racist actions. At the top, it asks, “Who would win?” On one side is the racist Snapchat and on the other side is the administration’s email response, “Boston College condemns all act of hate and is committed to holding any student who violates accountable…” Another meme is a picture of Boston Celtics forward Gordon Hayward sitting on the ground after breaking his ankle on Tuesday night. University President Rev. William P. Leahy, S.J.’s face is photoshopped on Hayward’s and the broken ankle is covered by a CBS news logo and an image of the walk-out on Wednesday. The post received 183 likes and comments like “dank AF.”

The memes were not op-eds denouncing institutional racism, nor were they theses on how to combat internalized racial assumptions. And the moderators do not want that.

“We don’t want a long list of comment wars on posts,” Byrne said. “We don’t want that response to be vocalized in the group. We want the group be a starting point where people, who may not be vocal advocates of progressive issues, can at least laugh at the humor and acknowledge the truth it’s rooted in.” 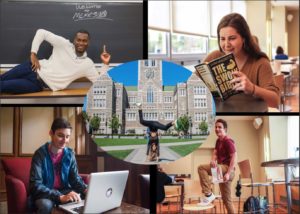 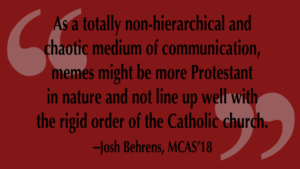