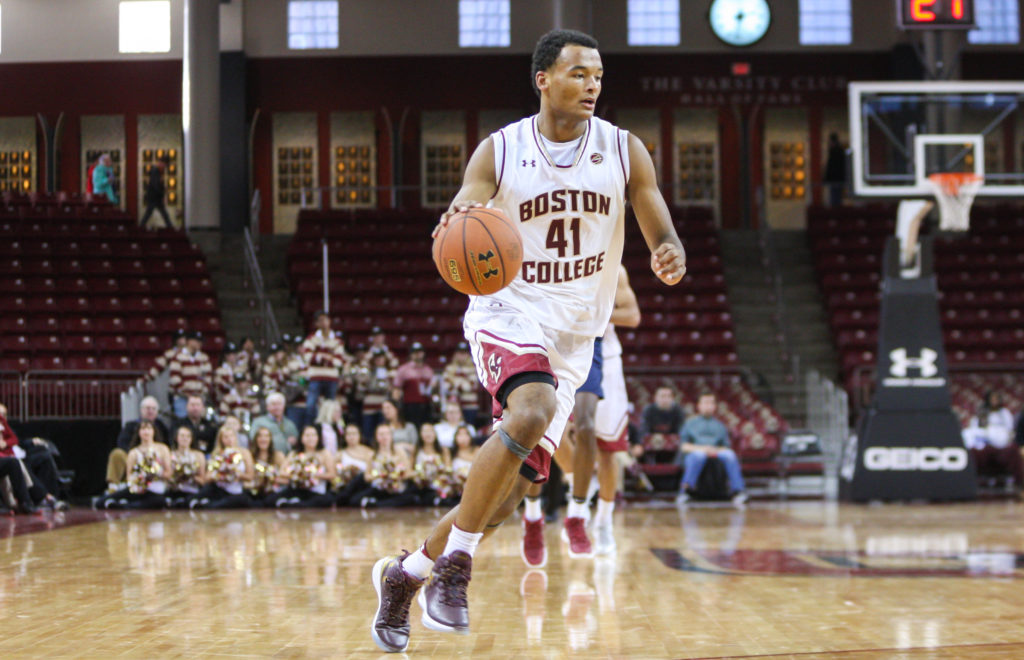 Boston College men’s basketball forward Steffon Mitchell was everywhere but the box score in his collegiate debut against Maine on Friday night. The freshman was aggressive on the glass, especially on the offensive end of the floor, and passed the ball like a point guard. Following the game, head coach Jim Christian described Mitchell as “more of an energy guy,” and said that he wasn’t expecting him, or anyone really, to come off the bench and light up the scoreboard.

But on Sunday, Mitchell did just that. The 6-foot-8 Shakopee, Minn. native racked up a game-high 21 points, shooting 7-of-9 from the field. Mitchell attacked the paint, drawing four fouls, but he also took his fair share of perimeter shots. In fact, the freshman hit all three of his 3-point attempts. And last, but not least, Mitchell made it his priority to bring down offensive rebounds.

“I think the more second chance shots we have, the better chance we have to win the game,” he said. “That’s more 3-pointers, more putbacks…just easier to play basketball that way.”

It certainly was easier. As a team, the Eagles recorded 18 offensive rebounds and 13 second-chance points, more than enough to rout South Carolina State, 91-52—the largest victory in the Christian era, and BC’s biggest win since it defeated Wake Forest, 112-73, on Jan. 12, 2008.

The Eagles (2-0) never really found a rhythm from 3-point land in their win over Maine. That wasn’t the case on Sunday. BC knocked down six of its first seven outside shots, and entered the break with seven—just as many as the Bulldogs (0-2) had field goals in the entire first half.

Ky Bowman, Jerome Robinson, Jordan Chatman, Teddy Hawkins, and Mitchell all got in on the air raid. The Eagles pulled away early, thanks to back-to-back 3-pointers from Robinson and Chatman, and an additional Robinson jumper. But BC wasn’t just outshooting SC State—it was also bodying the Bulldogs, whose tallest player was listed at 6-foot-9, on the interior. For the second-straight contest, Hawkins and Nik Popovic controlled the glass. Popovic corralled five offensive rebounds—a couple of which led to easy putbacks. And Hawkins recorded nine boards in the first 20 minutes, at one point matching SC State’s team total.

Instead of scoring, Bowman and Robinson were creating. Twice, Bowman found an open Popovic on the pick-and-roll. Later in the half, Robinson dialed up a perfect pass to a cutting Mitchell for the lay-in at the hoop.

SC State was inaccurate from downtown and, although the Bulldogs got to the line quite often, their inside presence was virtually non-existent. They only scored 19 first-half points—nine of which came off of 3-pointers or free throws. BC, on the other hand, exploded for 47.

The Eagles didn’t take their foot off the gas in the second period of play. Not only did they continue to fire away offensively, but they also ramped up their defensive intensity. By stretching out the shot clock, and contesting shots, both inside and out, BC limited the Bulldogs to a mere three points in the first six minutes of the second half.

After intermission, Bowman, Robinson, and Chatman made a few shots to get things going, but it wasn’t long before Christian subbed them out. Already up more than 30 points, the fourth-year man decided that it was best to rest his premier scorers. From that point forward, the bench—primarily composed of freshmen—took over.

Mitchell kept on impressing, and guys like Vin Baker Jr., Luka Kraljevic, and Avery Wilson got some valuable minutes. Wilson, in particular, made the most of the opportunity. The freshman guard converted both of his 3-point attempts and finished with seven points. Leading by nearly 40 points, Christian checked in all of his walk-ons. Gordon Gehan, a junior who hadn’t scored since the 2015-16 season, logged five points in the final minutes.

No matter who was on the floor for BC, one thing remained constant: ball movement.

“There’s just a really good feel for where guys were and guys seeing and making plays,” Christian said. “Eighteen assists could have easily been 25 or 26, but we missed a couple shots. But what’s behind it, is that we’re playing the right way, and that’s what really matters.”

Ten different Eagles played 10 or more minutes in the blowout win. Out of all the stats, that one could very well be the most important, considering that BC has to play its third game in five days on Tuesday against Sacred Heart. The season spans upwards of five months. Guys like Bowman and Robinson need all the rest they can get.