Green Day’s ‘Back in the USA’ Breaks the Status Quo

While much of the country remains lulled into a sense of complacency, Green Day tries to wake up the sheeple with good old-fashioned rock and roll. Its latest music video for previously unreleased track “Back in the USA” pays homage to John Carpenter’s 1988 sci-fi horror They Live, in which a select few are able to see through the superficial propaganda and liberate the world from inhuman tyrants.

Harkening back to ’50s America, the video begins in a black and white suburb. The band plays neighbors in this picket fence utopia, complete with push mowers, dapper dresswear, and glib wives. Billie Joe Armstrong enjoys a cup of coffee as he picks up the paper in an argyle vest. The morning routine is interrupted by a travelling saleswoman selling sunglasses which allow him to see the television in color. After buying a pair, Armstrong rushes next door to show his friends. But after a moment of hapless fun on the TV, one of them notices something strange.

When looking at posters of cars, ring advertisements, and magazine covers, the men notice harrowing messages, like “CONSUME”, “CONFORM”, and “PROCREATE.” Upon looking back at the TV, the news appears to read “PRESIDENT TO LIE TO NATION TOMORROW NIGHT”, a likely critique of the current administration. Upon this revelation, the men spring into action, just as the chorus kicks in. Storming unto the TV, just as the Trump-ian president speaks, the men invigorate the world through their music, allowing color to disseminate from the television filling the world with vivacity and brilliance.

The video offers and interesting reversal of the visuals seen in They Live. In the film, the glasses allow the protagonist to see the grim, black and white reality beneath society, clueing them into the shadows at work beneath the surface. In the “Back in the USA” video, the glasses allow color to be seen, symbolizing a sort of hope through awakening. The video makes a pointed statement about the current political and societal climate, as it clearly implores those with enough awareness to make a difference, just as the band did within its video. Pointed lines like “The saddest story ever told (bitter year) / Is feeling safe in our suburban homes” are indicative of the kind of tacit complacency the band is trying to fight. Should we truly look to change the world and those in it, it requires, as the video suggests, action on the part of those who understand the underlying issues. 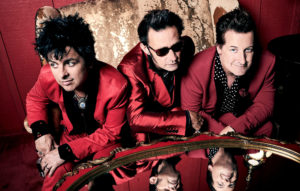