On Sept. 10, Green Day debuted “Father of All…,” the title track of its upcoming album, which is expected to be released in February 2020. With this quick two-minute and 30-second song, Green Day supplied its loyal fans with a catchy, and characteristically angst-filled song. “Father of All…” has a care-free, “so what?” attitude, perfectly encapsulated on the album cover by a rainbow-spitting unicorn.

From popular hits such as “Basket Case” (1994), “American Idiot” (2004), and “21 Guns” (2009), Green Day has never shied away from obvious critique of American society and, more specifically, American politics. “Father of All…” focuses more on the general chaos of life and the repeatedly mentioned “riot inside of us,” which doesn’t quite pack the punch of some other Green Day classics.

With repetitive lyrics and familiar guitar riffs, “Father of All…” is an easily forgettable Green Day release. While it is a skippable Spotify play, it does lend itself to live performance with its up-tempo grooves. “Father of All…,” although full of empty lyrics, still has the potential to be an energetic and crowd-riling concert feature on the band’s 2020 stadium tour with Fall Out Boy and Weezer. “Father of All…” has all of the staples of an energetic rock song, but falls short with its message, something that made Green Day’s earlier songs so memorable.

In 2017, Rex Orange County’s career skyrocketed with his release of “Loving is Easy,” a radio hit with a music video that has since amassed over 17 million views. Rex Orange County fits in perfectly with music’s emerging genre that blends rap and pop with a splash of indie, a movement accelerated by artists like Khalid and Quinn XCII.

Rex Orange County’s “10/10,” his newest release that debuted on Sept. 12, is a perfect addition to his discography. “10/10” tells an oh-so-relatable coming-of-age story with the clever lyricism and smooth, optimistic music that makes him stand out, even when dealing with trite subject matter. This song chronicles his familiar desire to feel like a 10/10, even though he feels more like a 5/10. “10/10” picks you up, makes you smile, and makes you think, all while tapping your foot along to the easy-going tune.

In preparation for the newest Charlie’s Angels reboot, Ariana Grande, Miley Cyrus, and Lana Del Rey teamed up for “Don’t Call Me Angel.” The song has an aggressive empowered edge, in line with the “7 rings” and “Break Up With Your Boyfriend” era of Grande, and is really only notable because of Cyrus and Lana. Cyrus occasionally sings in the background of the track in her deep and raspy tone, while Del Rey only makes a real feature during a slow interlude. Each female singer has a part that suits their unique voices, but overall “Don’t Call Me Angel” comes off as just another unremarkable, albeit star-studded, promotional track. 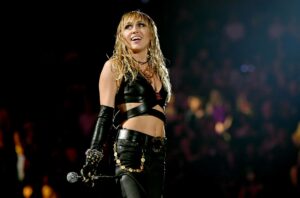