Students packed into Higgins 300 last Friday to hear eight of their peers give short lectures in the vein of TED Talks. BCTalks, now in its seventh year, provides students the opportunity to speak about any topic they are passionate about, ranging from concussion research or sex trafficking to the existence of free will or the value of uncertainty.

Branden Lee, MCAS ’21, shared the story of how one high school debate tournament completely altered his view of the world. One topic in particular, titled “under science, there is no room for free will,” inspired Lee to question his view of self-determination.

“I came home rejuvenated with a new revelation and I ran to my sister and I told her that if I slapped her across the face that it would not be my fault,” Lee said.

Lee ultimately found that if we are all are determined by nature and nurture, then it should not be hard to be compassionate toward others.

“If you want to judge somebody by their actions, you have to understand that their action not only derives from their genes and environment, but also a concept of free will that was handed by an external force,” Lee said.

Following Lee, Elyse Mackenzie, MCAS ’19, discussed how important it is that students understand how memory works. Between studying for exams, meeting new professors, and working with new faces each semester, college students constantly rely on keeping their memory sharp.

“I want the entire BC community to care about neuroscience, particularly about the neuroscience of memory, because it affects us each day,” Mackenzie said. “It can help us perform better as an institution and it can teach us valuable lessons in how to eventually avoid cognitive decline.”

Grace Chung, MCAS ’18, explored what it means to be an Asian woman in today’s world. While canvassing over the summer, she was subjected to an uncomfortable offer to meet with men after work and overtly inappropriate comments.

“I wasn’t someone in the public sphere that you grabbed dinner with,” Chung said. “I was someone you went to bed with.”

Chung felt pressure from the Asian community to be complacent. Even innocent comments about letting others speak mask expectations for how she behaves. Her activism is often met with criticism that she comes off too angry and intimidating, which caused her to cut back on sharing her opinions.

“Women and women of color have constantly had to adjust their words to make the public sphere comfortable and minority spaces comfortable as well,” Chung said. “We need to become more aware to break this unconscious stereotype that both men and women have internalized.”

After Chung, Adam Martin, MCAS ’20, argued that the issues facing the modern Republican party are a part of a larger historical pattern, although people often say that modern politics are nothing like we have seen before.

“Even though they have long stated a plan to in effect bring down this big government and control out-of-control spending, we find that historically, not just in the present, there have been situations where the Republicans have controlled both chambers of Congress, have sought to achieve these goals by taking down and turning back various essential key programs,” Martin said.

Adam identified several major factors that have held Republicans back since the New Deal, such as the long-standing divide between conservatives, moderates, and liberals within the party and  misreading mandates, which often cripples the ability of politicians to effectively push their agenda.

El Hadj Dieng, MCAS ’18, then covered the association between criminality and blackness. After being singled out by a police officer for being the only black person in a group of his friends, he realized the the officer had assumed that he must have been a criminal, a result of the “law and order politics” that have become become part of society.

Media depictions of crime, spurred on by targeted punitive policies, have invaded political rhetoric and language. Campaigns became more about being “tough on crime,” which sent a message to worried white voters that African-Americans, now associated with crime, that they would be safe.

“It hurts to see something that’s so detrimental and demonstrative of how racial America can be being popularized,” Dieng said. “So I just want you guys to think, if anything from this talk, about the words that you guys say, like: ’thug,’ or ‘gangster,’ or ‘predator,’ because they have a lot of history behind them.”

Jan van Merkenstein, MCAS ’18, continued the talks by explaining how a tenth-grade concussion left him with a lasting interest in how brain injuries work. Since then, he has worked at the Concussion and Brain Performance Clinic at Stanford and SyncThink, a Boston-based medical technology company.

Turning his attention to concussions at higher education, van Merkenstein began talking about the football culture that both students and schools greatly emphasize. Ever-increasing budgets, specific courses for players, and preferential treatment often shape some colleges. But as concussion rates climb, especially in hockey and football, he urged awareness about how widespread concussions can be for collegiate sports.

“Though this all occurs at other schools, it also reflects on us here at BC,” van Merkenstein said.  “So when people talk about football as a financial thing, not only does that make the student not a student, but a source of income, which is wrong. So really, I just want to ask how do we care for the BC athlete’s brain, health, and wellbeing going into the future while maintaining our sports culture in a responsible way?”

Following van Merkenstein, Carlande Nicolas, MCAS ’18, discussed her time working at a “safe home,” where trafficking survivors can be given support and rehabilitation. Trafficking victims are often raped multiple times a day, she said, and many of the women she met were recovering from addiction, which they had turned to as a means of coping with the abuse.

“In response, non-profits and other legal agencies worked to have Safe Harbor laws created,” Nicolas said. “Safe Harbor [laws] are state-ordered law provisions established to prevent the criminalization of children on two baseis. In simple terms, one: children would not longer be arrested, and two: children would be provided services for rehabilitation.”

Finally, Soojin Park, MCAS ’19, explored the epidemic of certainty she sees at BC. She found that we always want a clear-cut answer to avoid the unknown, even if it meant being wrong or undercutting the possibilities. This avoidance of uncertainty, she said, affects our interactions with others, our perception of knowledge, and our response to life.

“We are only skimming the surface of life’s opportunities when we don’t embrace the benefits of what not knowing at times can bring us,” Park said. “So tonight after this presentation, I challenge you to think of the gray areas in your lives.” 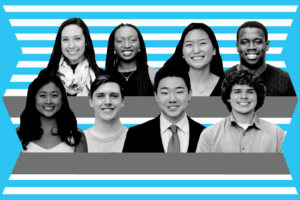